When the rubber meets the road, it’s the driver’s skill that counts 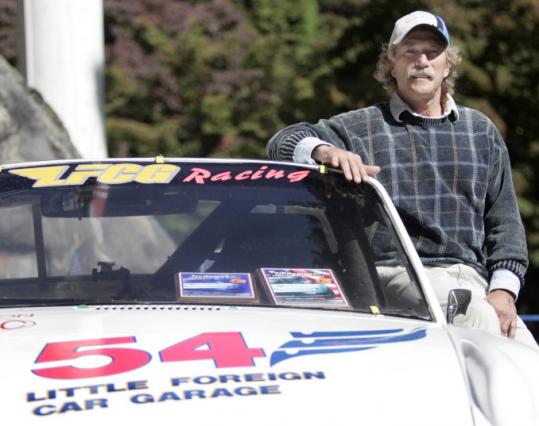 With a Dale Earnhardt mustache, long hair, baseball cap, and mirror sunglasses, it’s not hard to picture Ken “Skipper’’ Hull cruising around the track with a pack of cars chasing him.

Standing under a flagpole late at the 15th annual Weston Antique Car Show with three Porsches, he talks about his favorite: the one in the middle. It’s not shiny and museum-clean like most of the cars at the show.

That’s because this car’s not for showing. It’s for driving.

Hull, 60, of Lincoln, races the white 1972 914-6 in the Sports Car Club of America’s North Atlantic Road Racing Championship, an amateur league that draws drivers from throughout the Northeast and a wide range of cars.

But Hull’s 37-year-old racer is no clunker. The car, like its owner, is a winner. Hull is six for six this year, winning every race he’s entered while smoking past late-model Porsches, Volkswagens, BMWs, and Mazdas.

The league gives racers points for their top eight finishes out of its 11 to 14 races per season, but Team Hull has shut it down after six because it’s statistically impossible for anyone to catch him in the points standings. He’ll get the trophy this year, his second in a row.

There’s no prize money at stake. Hull said he spends several thousand dollars per race for parts, supplies, and pay for his crew.

“For me, the challenge, the goal, and the love is to make an old Porsche compete with the newer cars and still beat them,’’ said Hull, who owns Little Foreign Car Garage in Waltham.

The car is technically old, but the parts are new. In fact, the tail lights are among the few remaining original parts. Every racing season, Hull and his team strip the car down and rebuild it with new shock absorbers, brakes, and engine parts. Even the outer shell is new, made of lightweight carbon fiber.

Hull has been a car guy since he could stand upright.

“My uncle, grandfather, and my father were car nuts, and they had LaSalles, and Cadillacs, and Lincolns,’’ Hull said. “On weekends, when I was a young kid, we’d go to my grandparent’s house, and the men would go out and change spark plugs and oil, and I’d hand them wrenches, and I’d polish the wheels and things like that.’’

Hull said he was always tinkering with cars, especially as a teenager. He was particularly good at taking things apart, but it was the next step, Hull said, that helped him develop a true appreciation for engineering.

“When I started learning how to put a car back together so things would work, that was a key moment in my life,’’ Hull said. “I love automobiles. The engineering challenges always fascinated me - they challenged me in a way that made me want to learn more.’’

Hull turned that thirst for knowledge into bachelor’s and master’s degrees in engineering from the University of Massachusetts at Lowell.

He started racing his Porsche in the late 1980s and has used the same car ever since.

The races get competitive, and the tracks get congested. The league is broken into competition classes, based on types of cars and engine configurations, but all race at the same time. With about 25 cars on the track at once, Hull has to watch out for the competition in his class, racing at about 150 miles per hour, while also staying out of the way of classes of cars going upward of 200 miles per hour. Still, crashes are rare, and the 10-car pileups seen on ESPN are unheard of in this league.

“There’s quite a camaraderie and team spirit within amateur racing,’’ said David Windle, 45, who used to race both professionally and as an amateur in the Sports Car Club league. “Skip is known as being a good driver. One of the things that gets you recognition in the sport that Skip is doing is being a good quality person - it’s against the rules to hit somebody and bump them off the road.’’

Windle, who runs a shop of his own, DRW Motorsports in Boxborough, helps tune up Hull’s car for races. He said that Hull has a good reputation for being an honest, careful driver. “He doesn’t stretch the rules. He uses his skill and speed to win the races, as opposed to being an aggressive driver,’’ Windle said.

The winding road courses these racers run can be 3 to 4 miles long, with several turns in each lap. The skill of the driver can be much more important than the top speed of the car. That works in Hull’s favor.

Modern race cars, with light, hollow frames with still-lighter fiberglass or carbon-fiber body parts, are made for the track. Hull’s Porsche was made for the street. The driver makes the difference.