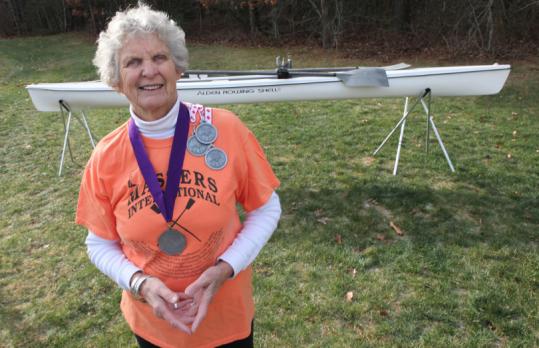 Walking through the halls of the Village at Duxbury, Marj Burgard is regarded as a local celebrity. And why not? She is a rowing pioneer, and now, at a spry 81, a world champion.

“Fellow residents are intrigued by her story, and her latest accomplishments in Canada,’’ said Carey Alexander, executive director at the independent retirement community.

In September, less than six months after knee replacement surgery, Burgard returned from St. Catharines, Ontario, and the FISA World Masters Regatta as a champion.

“Even here, where so many residents continue to excel in so many areas, she is a standout,’’ said Alexander. “She never calls attention to herself, but everyone wants to know more. When she agreed to tell us about her rowing, and shared slides from her adventures, we had a packed house of residents and staff.’’

Though one would expect Burgard to be a bit more energetic than the average octogenerian, she blows folks away with her vigor.

“I have a different story than most,’’ Burgard said in an interview this past week. “I started all this later in life after my four children were grown.’’

A Cohasset native and lifelong sailor, swimmer, and kayaker, Burgard says rowing always drew her like a magnet. “I often went by myself in a rowboat at age 6. Mom always thought I was safer in a boat than on a bike.’’

“I love becoming part of the ocean, of not thinking, and only breathing as the oars stroke the water. It’s the most exquisite feeling that makes you be in the now.’’

Burgard’s success with rowing is a natural product of her athleticism and passion for the water. She began rowing recreational shells in her 40s when she and her late husband, Arthur Martin, developed the famous Alden Ocean Shell, now considered one of the most popular recreational rowing shells in the world.

A naval architect, Martin designed the boat as a reinvention of a kayak, adding a new stern, riggers for oarlocks, a sliding seat, and longer oars to be rowed instead of paddled. The boat quickly became of interest to such a large number of rowers that the couple decided to put the boat design into production and move to Kittery, Maine.

“At first, the novel boat design was not accepted by the traditional racing shell rowers,’’ recalled Burgard. “But this changed in time as we developed new designs.’’

Over a 20-year period, more then 15,000 Aldens were built and the couple formed the Alden Ocean Shell Association, which still sponsors races and introduces countless novices to rowing.

The Alden and its founders received such acclaim that in 1990, Martin was inducted into the USA rowers Hall of Fame as “the Father of Recreational Rowing’’ four months after his death.

Following the loss of her husband, Burgard decided she needed a new challenge. “Some people take up knitting. I decided to master racing,’’ she said.

So, at age 65, Burgard took up rowing in a racing shell. Five years later, she won the Head of the Charles Regatta.

“During the race, I passed a woman under a bridge — although I wasn’t supposed to pass under a bridge,’’ she said. “She was holding me back but I blew by her, rowed hard, caught up, and won.’’

Three years later, Burgard and her new husband, Ralph Burgard, decided to test their skills in a global arena at the FISA World Masters Regatta.

“It’s fun to participate in masters sports to stay healthy and set new goals with the camaraderie of like-minded people,’’ she said.

Burgard underwent knee surgery in March, but in September, she decided to race again in the FISA World Masters with her youngest son, Richard Burbridge.

In a competition in which more than 3,000 rowers (from 33 countries) participated in 167 races each day, Burgard finished first in women’s doubles, women’s singles, and mixed eights, and she and her son placed fourth in mixed doubles.

Burgard was the oldest woman from the United States in the competition, and the only one inducted into the coveted Ancient Order of the Oars, which honors competitors age 80 and older.

“The real champion of the regatta was my son, who had to train hard to develop new skills on his own at age 50,’’ she said. “All I have to do is live longer than someone else and continue to do what I really love.’’

A certified US rowing coach, Burbridge said his mother is a “driven athlete, a rare breed. . . . I’m proud to say my mom is a world medalist swimmer and rower.’’

Burgard has a knack for pulling people into her passion.

“Mom asked me to bring her to worlds, and I said, well if we’re going together, I guess we should row,’’ said Burbridge, also the rowing coach at Hingham High. “I rowed as a boy, and grew up with the Alden, even if I had never raced, rowing was natural to me. Now, my daughter Jessica is a rowing coach at a summer camp in Hingham.’’

Burgard has inspired hundreds to pursue the sport through sponsoring and organizing races, including the Isles of Shoals race in Kittery, Maine.

“I’ll always remember how she first encouraged my son [Will] to row at our camp in Maine,’’ said Bill Miller, a six-time member of the national rowing team. “Marj would come up and say, ‘Come on, let’s get into the shell and I’ll show you how to row,’ ’’ Miller said.

Like his father, Will Miller is now on the US rowing team.

“Marj is extremely enthusiastic about rowing, and rows whenever she can. The more she does it, the happier she is,’’ said Miller. “There’s a rowing machine at the village that she gets on with all the energy in the world while her fellow residents stare at her wide-eyed.’’

Burgard has no trouble keeping up with modern life. She knows how to Skype, use a flash drive, and delve through blogs and Craigslist.

“I’ve always had a lot of energy. I want to drive to North Carolina soon by myself even though my family questions it. I want to lead my senior exercise classes and to see people actually pushed,’’ she said. “It feels good to be energized and be in shape.’’

Asked if she ever takes a break, Burgard stared blankly: “Break? No.’’

“I love the rush of racing. It’s the ultimate; there just isn’t any feeling like the adrenaline rush that comes from pushing oneself to the limit and feeling those endorphins bursting within you. Rowing is great because it’s a sport you can do on your own. I row because I can’t help it.’’