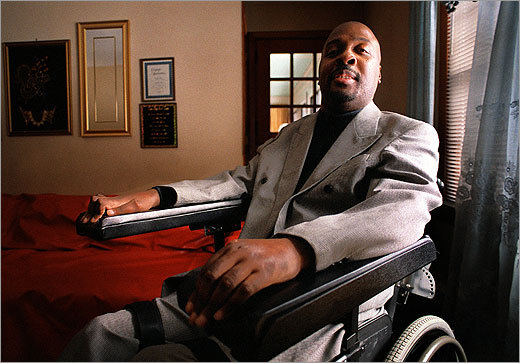 Toughest guy I ever knew.

Darryl had every reason to complain and hate. And yet he never complained and he never hated.

Our city was five years into school desegregation and tensions were still running high when Williams and his all-black Jamaica Plain teammates went to Charlestown for a high school football game Sept. 28, 1979. Darryl, a sophomore, had just caught his first varsity pass and was standing in the end zone with his teammates at halftime when he was felled by a bullet in the back of the neck. The shot came from a projects rooftop across the street. Three beered-up white teens later said they were shooting at pigeons, but everybody knew what they were really doing. Mayor Kevin White immediately said the crime was ‘‘racially motivated.’’ Three days later, Pope John Paul II prayed for Darryl on Boston Common.

The bullet changed everything for Williams. It made him a quadriplegic. It put him in a wheelchair for the rest of his life — a life that ended unexpectedly of respiratory failure at his home south of Boston yesterday morning.

Darryl was a motivational speaker, spreading the message of forgiveness and compassion. He also had a job with the Massachusetts State Lottery and served as an outreach specialist for Northeastern’s Center for the Study of Sport in Society. He earned a bachelor’s degree in human resources management from Northeastern. He was forever speaking to young people, and in 2008 accepted The Sports Museum’s Special Achievement Award at the Tradition at the Garden.

‘‘I made peace with my situation long ago,’’ Darryl said. ‘‘I understand where hostility and ignorance come from and I’m able to rise above it. Ultimately it has a lot to do with knowing that other people look to me for inspiration. They get inspiration and strength from me and that makes me feel honored.’’

That was just Darryl. It was his nature. He reasoned that the bullet had given him more time to think. He put all that extra thinking to good use and dedicated his life to making the rest of us think.

I first met Williams in 1990 when I saw him in his wheelchair in the Chicago Bulls locker room. He was there to meet Michael Jordan. He had his picture taken with the superstar. A mutual friend introduced us and Darryl gave me his number. He said it would be OK to call. I called, then went to his house with a tape recorder and we talked for a couple of hours for a Globe magazine story. For the cover photo, he agreed to go back to the field where he’d been shot.

‘‘This is the last place I felt the shirt on my back,’’ he said that day.

It was the first and only time he went back. A year later, Darryl had surgery to have the bullet removed from his neck. He was amused when the Boston Police immediately confiscated the bullet. Twelve-year-old evidence, I guess.

We became friends. He called a lot. He e-mailed a lot. The word ‘‘unique’’ was part of his e-mail address. He ended every message with ‘‘Peace.’’

I was always amazed at Darryl’s technological and communication skills. He had a little movement in his left arm, but most of his work was accomplished with a voice-activated computer and environmental control system.

Like most guys, Darryl liked watching sports on television. He had a lot of opinions about everything and he loved to share those opinions. He knew as much about the Patriots and Celtics as any fan.

He got his hair cut every week and wore great clothes. He liked the ladies. He had friends in all the front offices of the local teams and they did their best to take care of his ticket requests.

Darryl’s mom, Shirley Simmons, was there for him every day of his 46 years. He is survived by one sister, Karmel. He also had a posse of friends — cops, firefighters, entertainers — who would accompany him to concerts and ballgames.

He wrote a book and was trying to get it published. He wanted Denzel Washington to play the lead when the book was made into a movie.

The book hasn’t been published, the movie hasn’t been made, and Darryl and his family never received true justice in the decades after the crime. But those of us who knew him and loved him are changed forever because Darryl was here.

A fund has been established to assist the Williams family with the cost of the funeral services. Donations can be forwarded to: The Darryl Williams Fund c/o Mt. Washington Bank, 430 West Broadway, South Boston, Mass., 02127.