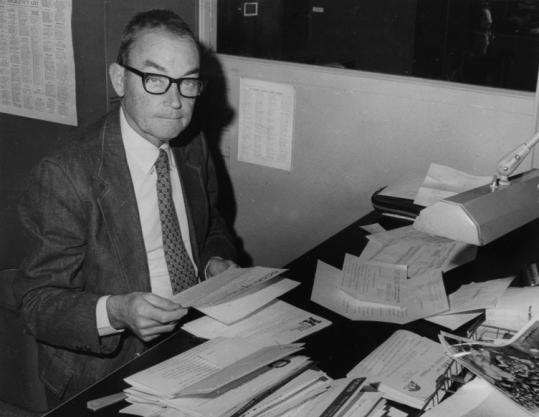 Ernie Roberts helped put together what many viewed as a dream team of sports writers at the Globe.
By Bryan Marquard Globe Staff / March 24, 2009
Text size – +

That's how Ernie Roberts started his Saturday sports columns for The Boston Globe, 394 of them. Then he would tell readers what somebody - a colleague or a coach, a player or a friend - liked to eat for breakfast.

"I'm a guy who used to eat Grape-Nuts every morning," he wrote in his last Saturday column on May 28, 1983. "Then, desperate for an opener, I tried a gimmick lead one June Saturday in 1974 - 'Good morning! Let's start with ice grapefruit juice, then scrambled eggs and link sausage.' That struck a responsive chord with the readers and got me into the breakfast business. I was hooked."

"The Globe sports department that gained great fame and glory in the '70s, '80s, and '90s would not have taken the form or shape it did without Ernie Roberts, because Ernie recognized talent," said Globe sports columnist Bob Ryan. "He liked writers."

Mr. Roberts, who as a writer could tap out a column as deftly as he tapped in a putt at one of the golf courses he loved, died yesterday morning in Palm Beach, Fla., of complications of a stroke he suffered several days ago. He was 88 and had lived nearby in Juno Beach.

Mr. Roberts held another, less heralded distinction. He was the first Northeastern University co-op student hired by the Globe's sports department. Joining the sports staff officially a year after graduating from Northeastern, he stayed until retiring in 1983, minus a stint as sports information director at Dartmouth College from 1960 to 1966.

He started at the Globe in 1947, an auspicious year that marked the second and last time Ted Williams won baseball's Triple Crown, topping the American League in home runs, runs batted in, and batting average.

Truth be told, though, Mr. Roberts was more interested in golf and college sports, particularly college football, and his years at Dartmouth served him well. By reading the work of sports reporters around New England, he knew where to look for new talent when he returned to the Globe as sports editor for the evening edition.

"It's kind of forgotten now that you could actually look for someone in your own neighborhood to work for the paper," said Leigh Montville, a former Globe sports columnist and former senior writer at Sports Illustrated whom Mr. Roberts had hired.

A congenial boss, Mr. Roberts "was a nice man, a gentleman, an easy guy to work for," Ryan said.

"He was probably the only person I've ever known in my entire life who had zero enemies," said Mr. Roberts's son, Jonathan of Newburyport. "It's really remarkable."

Mr. Roberts was also a mentor to aspiring sportswriters, evaluating their work and helping to guide their early careers by suggesting potential jobs they could take en route to the Globe.

One such apprentice was Shaughnessy during his days as a student at the College of the Holy Cross in Worcester.

"I was at Holy Cross, and he was very encouraging," said Shaughnessy. "He hired me as a correspondent. I would send him stories, and he would rewrite them, send them back, and tell me, 'This is how you should do it.' He was very patient and a good teacher."

At the Globe, meanwhile, Mr. Roberts and other editors put together what many viewed as a dream team of writers. Along with Ryan and Montville, there were Bud Collins, Joe Concannon, Ray Fitzgerald, Peter Gammons, Will McDonough, and John Powers.

Ryan said Mr. Roberts created an atmosphere that "allowed writers to be creative, and I'm grateful for that." Speaking of the years when Thomas Winship was editor of the Globe, Ryan added that "the paper in general under Tom Winship was known as a writer's paper, and the sports department was Exhibit A."

Mr. Roberts grew up in Danvers, graduating from Danvers High School in 1939. His studies at Northeastern were interrupted by World War II, when he served in the US Army Air Corps as a navigator. He told his family he was returning from a bombing mission in northern Japan when he heard the war had ended.

While working a summer job in Bar Harbor, Maine, Mr. Roberts met Mildred Wooster Roberts, who is known as Midi.

"He called his job 'pot walloper,' which I think was his term for dishwasher, and my mother was a waitress," their son said. "They got married in 1949 and would have been married 60 years in June."

For much of the past quarter-century, Mr. Roberts divided his time between Maine and Florida, golfing whenever possible.

He held memberships at country clubs in Cohasset, Florida, and Maine, writing occasional freelance stories for the Globe in retirement, usually about golf.

Followers of his column learned that he sampled each breakfast he mentioned, and that his favorite was "corned beef hash with a thin slice of mild cheese melted slowly over the top, English muffin with strawberry jam." That tip came from a colleague in the Globe's advertising department.

He signed off his final Saturday column with a simple "Adieu folks. Don't burn the toast."

In addition to his wife and son, Mr. Roberts leaves a daughter, Jean of Dayton, Maine; another son, Nicholas of Atlanta; a sister, Corrine Begin of Peabody; and four grandchildren.

His family plans to hold a private memorial service in the summer.