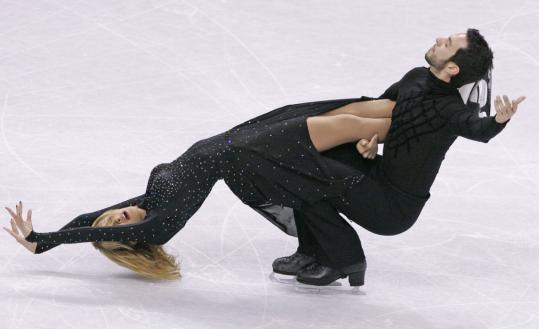 Tanith Belbin and Ben Agosto teamed with Chopin to dance off with the US title in January. (Nati Harnik/Associated Press)
Email|Print|Single Page| Text size – + By Nancy Armour Associated Press / March 16, 2008

The ice dancers are, after all, hip and energetic 20-somethings, and they like music that reflects their personalities. Classical music doesn't.

"We always felt classical music didn't suit our style, didn't highlight our strengths," Belbin said. "If anything, it would highlight our weaknesses."

But the Americans have come around this season. And it just might be the thing that wins them their first title at the World Figure Skating Championships, which begin Tuesday in Goteburg, Sweden.

Already among the favorites, Belbin and Agosto's chances of winning the United States's first world dance title got better last week when Russia's Oksana Domnina and Maxim Shabalin, the European and Grand Prix champions, withdrew after he aggravated a knee injury.

"This is the most prepared we've ever been heading in to any World Championships," said Belbin. "And it's also the best year we've felt as far as our package goes, with our programs. We have, in our opinion, a great shot at the gold medal, more so than any year in the past. We're really looking forward to capitalizing on all the preparation that we've put into this event."

Belbin and Agosto are the most successful dance team the US has had, and the Olympic silver medalists seem to break new ground every season. But when coach Igor Shpilband suggested they consider a classical piece for this year's free dance, they worried it might be too much of a stretch.

They turned down some Bach he suggested. When he came back with Chopin, though, they agreed to try it, and the flowing, romantic program has turned out to be the perfect showcase for their skills. It highlights their chemistry, expression, and speed, their traditional strengths. But it has also allowed them to show a maturity and depth of emotion they didn't have three or four years ago.

"[Shpilband] felt if we could do a really good job with this style, it would really help our growth," Belbin said. "There's no way to be a top team and say, 'I shouldn't do this style because it will show my weaknesses.' You should have no weaknesses.

"So I think in the end, it was so beneficial for us to challenge ourselves with this program. To learn how to skate strong and yet soft. To do more subtle facial expressions and choreography and still show a very competitive, strong program."

Crowds have loved it - the pair got a standing ovation at the US Championships in January - and judges have been impressed, too. In addition to winning the free dance portion of the competition at both of their Grand Prix events, Belbin and Agosto won the US championships by more than 6 points.

The only time they finished second was at the Grand Prix final, where their opening serpentine lift failed to earn the highest marks for difficulty.

The couple also has been putting in extra work on compulsories, their weakest area. They skipped last month's Four Continents championships in South Korea so Belbin could rest her knee, which she'd injured before the holidays, and the break gave them time to polish every part of their performances.

They'll need it. While the competition for gold won't be quite as stiff without Domnina and Shabalin, Belbin and Agosto still have to contend with France's Isabelle Delobel and Olivier Schoenfelder, last year's European champions.

"At the end of the day, I think whoever can really deliver the most moving, convincing performance will take the title," Belbin said. "It's an exciting year for ice dance because you can't really compare the [top couples]. There are so many different criteria the judges are looking for, and we all have strengths and weaknesses.

"You just have to dedicate yourself to your style, be confident in it and go with it."

The men's title is up for grabs - and that's even after two-time US champion Evan Lysacek dropped out last Thursday with an injured arm. Daisuke Takahashi is the only one of the top men who's been fairly consistent this year, but Johnny Weir, two-time world winner Stephane Lambiel, and defending champ Brian Joubert can't be counted out.

"It's very exciting for me to be a part of such a strong group of athletes and performers," said Weir, who is still looking for his first world medal. "You want to be in a competition where everyone is skating their best, where everyone is trying to one-up the skater previous to them."

The women's competition would seem to be between Kim Yu-na and Japan's Mao Asada, who finished 1-2 at the Grand Prix final. But Kim had to skip the Four Continents in her native South Korea because of a hip injury, and it's not clear how healthy she is going into Worlds.

The American women, meanwhile, are more focused on the number 13 than medals this year.

In order to keep three spots at next year's all-important Worlds - which determine how many slots each country gets at the Vancouver Olympics - the two best US women must finish with a combined placement of 13. Say, fifth and eighth. But because three of the top four finishers at nationals are too young to compete at Worlds, the US had to dip down to the women who were fifth (Bebe Liang) and seventh (Kimmie Meissner), along with bronze medalist Ashley Wagner.

Granted, Meissner was the world champion in 2006, but she's struggled this year. In hopes of reversing her funk, she left longtime coach Pam Gregory after nationals and is now training with Richard Callaghan, who coached Tara Lipinski to Olympic gold.

"Obviously I wasn't skating at the level I know I can," Meissner said. "I feel very confident I'm a lot better, and I feel a lot better. Hopefully everybody else will see what I feel."

In pairs, Aliona Savchenko and Robin Szolkowy of Germany will be trying to duplicate their victory at the Grand Prix final.