No false steps for True in winning BAA 5K

He defends his title with course record 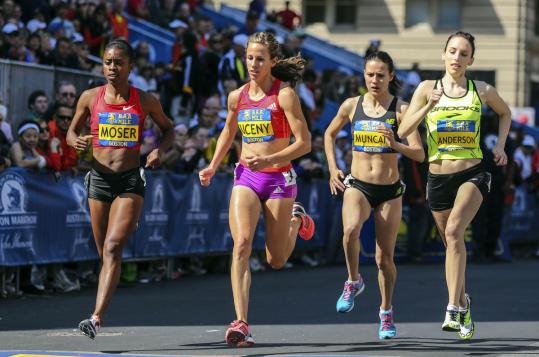 Over the final mile of Sunday’s BAA 5K, defending champion Ben True reeled in his competition. And for his late-race efforts, True took the men’s title in 13:41, breaking the course record of 14:06.5 he set in last year’s race.

Sam Chelanga finished second (13:43) and Adrian Blincoe (13:46) filled the final podium spot. On a sunny morning with temperatures in the 60s, all top 10 finishers in the men’s race broke last year’s course record.

For True, familiarity with the course from last year’s event paid off Sunday, though the 2012 race started more quickly and unfolded differently before the sprint to the finish.

“I was a little worried with a mile to go that maybe I just didn’t have it in my legs today,’’ said True, who trains in Hanover, N.H. “But this finishing straight is very long and, I think, a lot of people forget how long it is. So, I was just biding my time on the way down. I was just trying to make sure I had something in reserve to try and get by them again. Luckily, I did.

“You go too early and you really have nothing left for the last 100 meters. Luckily, I had that in the back of my mind going down the finishing straight. So, I was able to hold on.’’

At the 2-mile mark, a couple runners made a break and left True slightly behind. He was in fourth place as the leaders turned onto Boylston Street for the homestretch. Then, he picked off the runners ahead of him during the long finishing straight.

“When those guys made a break on me and had a nice little gap on me, I was a little worried I wasn’t going to be able to reel them in,’’ said True, who suffered through an injury-plagued winter. “The fact that I was able to push through and catch back up to them was nice. It’s reassuring that my fitness is where it needs to be right now. Hopefully, it bodes well coming to the Olympic trials in June.’’

True is still deciding what he will run at the trials in Eugene, Ore., with the 5K or 10K or both possibilities. But Sunday, the product of North Yarmouth, Maine and Dartmouth College was enjoying a race close to home in front of a hometown crowd. He has a cousin running the Marathon Monday. And one day, True figures he’ll be back to take on 26.2 miles.

Ethiopian Werknesh Kidane easily triumphed in the women’s race, crossing the line in 15:12 and breaking the course record (15:51.6 held by Kenyan Lineth Chepkurui). She pushed the pace hard, surging ahead at Mile 1.

“It was a good race,’’ said Kidane through a translator. “I had a plan for this race. I had a plan to surge.’’

“Werknesh took it pretty hard the first mile,’’ said Smith, a Providence College graduate. “Myself and Aheza tried to keep up with her. Then, just after Mile 1, she went really fast and got away from us and put a pretty big gap in. The gap kind of stayed the same from there to the finish. We tried to work together to get the gap a bit closer, but Werknesh was very strong today.’’

Desiree Davila, last year’s Boston Marathon runner-up by 2 seconds, finished in 10th place (16:03). She entered the race to “come out and bust some rust and there was a lot of it there.’’ Coming down Boylston Street, she couldn’t help but think of the Marathon finish.

“Even running down that final stretch, I was like, ‘How do you get this right?’ ’’ said Davila.

A grandstand full of fans got a good look at American Morgan Uceny during the BAA Invitational Mile. The world’s top-ranked 1,500 meter runner, according to Track & Field News, won the women’s mile in 4:43.8. Defending champion Marina Muncan of Serbia finished second in 4:44.5

“It was really fun,’’ said Uceny, who also won the women’s invitational mile two years ago. “I had a great time. I’ve come a long way in two years. I’m more aware of my running style, my strengths and my weaknesses. So, it makes it a little easier when you tap into that.’’

Uceny largely left it to her kick to earn the win.

“This time in the season, I don’t think anyone’s really sharp,’’ said Uceny. “A lot of strength work is going on. So, I wanted to get the first lap going just a little, sit the second lap, then make sure I was in a good position to kick coming around the last corner.’’

Uceny added that her training for the Olympic trials was going so well that “it was one of those things where you’re almost worried that things are going too well. I hope special things happen this year.’’

In the men’s BAA invitational mile, Australian Collis Birmingham made a strong move with a little less than half the race remaining and took the win in 4:06.0

“I was pretty aggressive,’’ said Birmingham. “I wanted to be aggressive. I thought I’d put it out there and make the guys chase me and it worked in my favor. I ended up running pretty well.’’

Birmingham already has been named to Australia’s Olympic team. And the mile was a chance to switch gears a little in his preparation for the Summer Games.

“I’ll run the 5K in the Olympics,’’ said Birmingham. “All my training is focused towards that. This is trying to break up training a little bit. Something a bit quicker should be good for me.’’

Ben Groleau of Framingham won the BAA boys’ Scholastic Mile in 4:27.2. Evelyn Heffernan of Newton took home the girls’ title with a time of 5:23.1. The scholastic mile races feature high school runners from the eight towns that constitute the Boston Marathon course.