THIS STORY HAS BEEN FORMATTED FOR EASY PRINTING
MARATHON NOTEBOOK 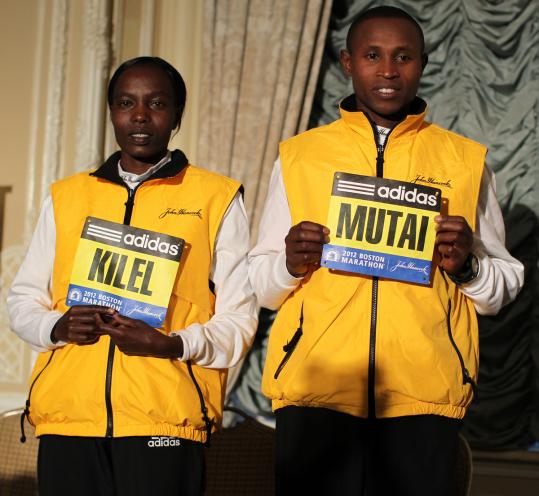 Amid growing concerns about high temperatures on race day, the Boston Athletic Association announced a deferment option for this year’s Boston Marathon and plans to keep the course open an extra hour. Many runners learned of the changes from updates posted at the number pick-up area at the John Hancock Sports & Fitness Expo Saturday morning.

The latest forecast for Monday calls for temperatures to be in the 70s at the start, and reaching 85-90 degrees during the day.

Because of the unseasonably warm weather, the BAA will defer the entry of entrants to 2013 if they decide not to race. This includes everyone from qualifiers to charity runners.

To receive the deferment, entrants must claim their bib packet at the expo before it closes Sunday evening but not start the race. The BAA will follow up with next steps.

“For many people, running the Boston Marathon is a once-in-a-lifetime experience,’’ said BAA executive director Tom Grilk. “We don’t want people to feel they have to run, because perhaps it’s not the wisest decision under these conditions.”

Said race director Dave McGillivray, “This gives them a choice. They have to assess for themselves if they can handle these conditions.’’

By keeping the finish systems open an extra hour - until approximately 6 p.m. - organizers hope to encourage runners to take it slow, if needed.

“It allows for an additional two minutes per mile to slow down and be sensible about it,’’ said Grilk. “Be part of what could be a well-remembered experience, but do it in a way that is careful. Ultimately, it is an individual sport and individual decision, but we want to make sure we provide people with the comfort of knowing they can make the decision.’’

McGillivray said he thought about an earlier start, but that it would be virtually impossible to make it work, considering the organization of eight towns, the transportation of athletes, and other details.

Many runners applauded the BAA’s efforts to keep them updated via e-mail and social media. By 11:45 a.m. Saturday, the BAA sent a weather advisory e-mail to all 26,701 official entrants.

The advisory recommended that anyone “not highly fit’’ or with any underlying medical conditions not run. Additionally, it advised inexperienced marathoners not to run.

Still, given all the training and travel expenses, most runners are expected to be in Hopkinton.

“I’ll just adjust,’’ said Steve Ross of Canmore, Alberta. “I anticipate a much slower time, as we all do. We’ve been talking about the weather a lot, about strategies . . .’’

The extra hour, he said, “is a very good idea. It takes the pressure off people who want a finisher’s medal.”

Marshal is in town

Meb Keflezighi, who won the US Olympic trials in Houston in January, will cover the course in style as the race’s grand marshal, riding in the Nissan pace car ahead of the lead runners. “I hope to get a chance again to run on my feet here and to be in the lead,’’ said Keflezighi, who has finished in the top five twice. “That would be a dream come true. It’s one thing missing on my résumé.’’ Keflezighi, who won the silver in Athens in 2004, injured himself running in the Beijing trials but since has won New York and is very much in form.

With Keflezighi and Ryan Hall, last year’s top American finisher, prepping for London, the top domestic hope will be Nick Arciniaga, who finished eighth in the trials. “Boston is always on my list every year,’’ said the 28-year-old Californian, who finished 10th here in 2008. Arciniaga, whose personal best is 2:11:30, still may have a chance to make it to the track trials in the 10,000 meters if his qualifying time holds up, but he figures it’s a long shot. “I’m pretty much throwing Olympics out the window and focusing on the road,’’ he said.

Moses will lead them

Kenya’s Moses Mosop, who finished four seconds behind countryman Geoffrey Mutai in last year’s “world-best’’ performance here, will be in Rotterdam Sunday hoping to bring down Patrick Makau’s official record of 2:03:38 set in Berlin last September. “I am well-prepared, and when the weather is OK, I think wonderful things are possible,’’ he declared on the international track and field federation’s website. Mosop, who ran 2:03:06 here in his marathon debut, will have paid pace-setters on the super-fast Dutch course. The X factor will be the wind, which Mosop is expected to have at his back at the start but in his face midway along.

Dick Beardsley, the most famous runner-up since Alydar, was planning to commemorate the 30th anniversary of his Duel in the Sun with Alberto Salazar by running in Monday’s race - until he stepped in a hole in December and fractured his left kneecap. “If you want to find me in Boston, look for the guy on crutches,’’ joked Beardsley, who ran here a decade ago. He and Salazar will be side by side again Sunday at 1 p.m. at the Boston Public Library in Copley Square for a discussion and signing of Salazar’s new book, “14 Minutes.’’