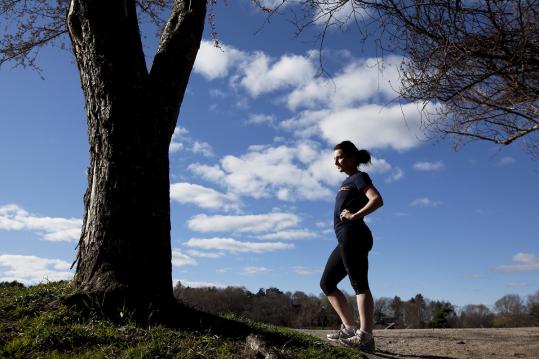 As of early April, Allison Buzzell’s Boston Marathon charity fund-raising effort was only at half of what she needed. (YOON S. BYUN/GLOBE STAFF)
By Beth Teitell Globe Staff / April 10, 2012
Text size – +

As hard is it may be to remember, when Allison Buzzell signed on to run the Boston Marathon for the Doug Flutie Jr. Foundation for Autism, she was excited about raising the $4,000 the Boston Athletic Association requires of charity runners.

“Don’t get me wrong,’’ said Buzzell, 25, a behavior therapist in Newton. “Running the Marathon is huge. But what’s more huge is helping this charity.’’

By early April, her enthusiasm had been tempered by fiscal reality: Her fund-raising was stalled at $2,000, half of what she needed. Desperate for donations, with the April 16 race looming, she approached strangers at an Allston bar and suggested they check a “cool [charity] website I found’’ - her own. “People were like, ‘Get away from me. Why is she so weird?’ ’’

Here’s why: Like many other charity runners, Buzzell forgot that the tens of thousands of fund-raising “athons’’ nationwide mean donors suffer fatigue, too. And that $4,000 BAA minimum is $750 higher than last year.

Indeed, charity runners’ stories start to sound painfully familiar: They are running because they are passionate about the cause; they assumed friends and family would instantly click “donate’’; they discounted the difficulty of simultaneously working, going to grad school (which many are doing), training for what may be their first marathon, and planning the equivalent of several bar mitzvahs to raise big chunks of money at once.

And there is an additional stressor: Most charities take runners’ credit card numbers, meaning that if a runner does not raise the required amount, blisters may not be the race’s only lasting pain. The charities can - and often do - charge the runners’ cards.

Because the money is collected by individual charities, the BAA does not have statistics on the percent of runners who end up footing part of the bill. But the prospect of putting oneself on the line to raise money is so daunting that at least one team, Team Brigham, has runners for only 56 of the 75 charity bibs allotted. (This has happened before, said a Brigham and Women’s Hospital spokeswoman, who stressed that runners have already raised $200,000, and the hospital expects to meet its goal.)

The Brigham team is one of the charities with bibs given out by race sponsor John Hancock, which has set a $5,000 minimum from each runner - $1,000 more than race organizer BAA’s minimum.

The financial pressure can make runners go a little loopy. “I was literally going door-to-door on Boylston Street,’’ said Christopher Collier, 29, a bank officer at State Street who was $2,200 short of his $4,000 goal in March. “It was like I was trick-or-treating.’’

He planned a fund-raising roast, but the comedian canceled, and his funniest buddy scored tickets to an NCAA tournament game and took most of the would-be roasters with him. “In the end, I only had two people to roast me.’’

The night at Sissy K’s bar worked out anyway. Those who did come bought lots of raffle tickets, putting Collier well over the minimum.

But he is one of the lucky ones. The charity runners are also facing increased competition that has nothing to do with finishing times.

This year more than 2,300 people will officially run the Boston Marathon for more than 130 charities; that is up from four charities with 500 runners in 1994, the first year the BAA formalized its charity marathon program. (From 1989 to 1993, the BAA worked with a few charities informally. The first was American Liver Foundation, in 1989, joined by Dana Farber in 1990.) Last year, official charity runners raised about $17 million.

And, of course, these amateur fund-raisers are not confined to the Boston Marathon. David Hessekiel, president of the Run Walk Ride Fund-raising Council in Rye, N.Y., estimates that last year there were about 50,000 “athons.’’

“People are like, ‘I’d love to give, but the Avon Walk for Breast Cancer is coming up, and the Pan-Mass Challenge, and the Tour de Cure,’’ said Nichole Bukowski, 33, the director of marketing for a start-up firm.

Bukowski is running to raise money for the Franklin Park Coalition, and as of early April, before two planned fund-raising events, she was $2,500 short of her $4,000 goal. Because many people are not familiar with the group’s mission, soliciting donations can be harder.

“If people are going to give to you, they want to know what the impact is going to be,’’ Bukowski said. “You are actually helping to fight cancer [if you give to the Franklin Park Coalition] because studies show that if you are active you are healthier, but it’s hard to explain all that quickly.’’

Kate Raunig, 22, another runner still thousands short of her goal in early April, said Heartbreak Hill is the least of her worries. “I know I’ll be able to run the 26 miles,’’ said the medical assistant at Brigham and Women’s Hospital. “But it’s kind of hard to force people to give you money.’’

The upside for the chosen is huge: They get to run without having to meet the marathon’s qualifying time, and support a good cause. But the increasing challenges for raising the money, combined with the stress of knowing they will have to foot the difference if they do not succeed, means one way or the other, the pressure is on.

Perhaps no one is better positioned to see the last-minute panic than Susan Hurley, founder of CharityTeams.org and a former Patriots cheerleader who matches runners with charities and prepares them for two endurance events - the one that starts in Hopkinton, and the one that starts “Dear Friend . . .’’

“What I am telling people now is create a sense of urgency, almost make it like a panic situation,’’ she said.

Most charities want their money in prerace, Hurley said, but some give runners a few weeks or even a month grace period. “But after May 1,’’ she warned, fund-raising gets harder because the marathon is “old news.’’

Hurley, who works with 13 charities and their runners, said about 80 percent of the charities will charge a runner who does not meet his or her minimum. But, she added, “there are extenuating circumstances. We’re all human.’’

Meanwhile, as should-be donors remain non-donors, tension builds. “I was the best man in his wedding, and he hasn’t donated or done anything yet,’’ said Ryan Stirling, 26, a engineer who is $700 short of the $4,000 he is raising for Mass Mentoring Partnership.

Meanwhile, as the warm weather arrives, and with it solicitations for every “athon’’ imaginable, local writer Beth Jones summed up what it feels like to be on both sides of the ask.

“I’m in a constant state of anxiety when I open e-mails from certain people,’’ she said. But last summer she rode her first fund-raising bikeathon, and it was her turn to hit up friends. “I felt enormous guilt asking for money, but now I know why people are so persistent.’’