Out of the running

After months of training, some would-be marathoners face painful injuries that force them to abandon their goal of completing the race 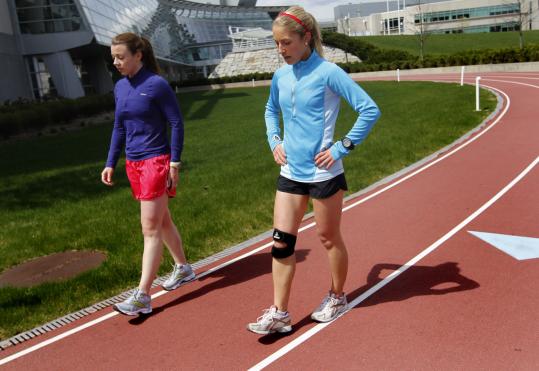 Lauren Phillips (right) cooled down with Kendra Lee. Phillips had been training for months for the Boston Marathon until a knee injury made it impossible to continue. (John Blanding/Globe Staff)
By David Abel Globe Staff / April 18, 2010

They have slogged through snowstorms, sloshed across puddles during the record rains, and heaved in the premature heat of early spring, all the while trying to ignore gnawing aches and pains as the miles mounted.

Like thousands of others training for the Boston Marathon, John Silvia has long envisioned the moment he crosses the finish line, which he can see from the window where he works on Boylston Street. After years preaching the gospel of running, the 32-year-old Marathon Sports manager completed his first Marathon last year and has been training for months for the grueling course from Hopkinton to the Back Bay, reaching 22 miles in one run last month.

Then he started developing blisters on the balls of his feet, which he ignored as the byproduct of running 40 miles a week.

In recent weeks, the pain became so intolerable he couldn’t run more than 3 miles. Last week, after months of encouragement from friends and colleagues, many of whom planned to cheer him across the 26.2 miles, Silvia acknowledged the reality: It was too painful to run.

“It’s like missing a course at the last minute before college graduation, and knowing that you’re going to have to wait until next year to get your diploma,’’ Silvia said. “It’s definitely depressing.’’

Over the past five years, about 98 percent of the runners who started the Marathon made it to the end just before Copley Square, but more than 10 percent — the vast majority of them elite runners who had to qualify in previous marathons — never made it to the starting line, according to the Boston Athletic Association, which organizes the race.

Each year for the past three years, about 1,000 qualifiers received medical deferments, allowing them to postpone their eligibility to run until the next year. As of last week, about 600 of the nearly 27,000 people registered to run tomorrow had sought deferments, and the organizers expected that number could double.

“The vast majority of these are people who are injured,’’ said Jack Fleming, a BAA spokesman, noting only qualifiers — or about 80 percent of the runners — can defer. “At a clinic we had in March, we were supposed to talk about nutrition, but everyone was coming up to coaches to ask about a gimpy Achilles, a knee thing, or whatever.’’

For most runners, the Marathon lasts between two and five hours, but the energy consumed doesn’t compare to the stress of the long months of training and many people either don’t make it or have to limp to the finish line. Theirs is a painful odyssey that includes dreaded running injuries such as shin splints, torn hamstrings, iliotibial band syndrome, plantar fasciitis, stress fractures, and a whole range of types of tendonitis.

Lauren Phillips had qualified to run last year’s Marathon, but about a month into her training, the 25-year-old from South Boston had to drop out because of pain in her knee. She received a medical deferral for this year and has been training since January, running 21 miles three weeks ago at a pace to complete the marathon in 3 1/2 hours.

Then Phillips started to feel pain in her knee again. She began taking 12 Ibuprofen a day, but it wasn’t helping, and so this month, she went to an orthopedist and got a cortisone shot.

When she tried to run several days later, her knee locked up. It was so painful she broke into tears.

“It would be one of the most disappointing events in my life not to be able to complete the Marathon,’’ said Phillips, who has been icing her knee twice a day, seeing a massage therapist once a week, and buying “natural anti-inflammatory’’ products from to get to the starting line. “There’s nothing worse than training for four months, sacrificing so many different parts of your life and trying to do your best, and then not being able to complete it because of something out of your control.’’

For Ken Skier, this year would have been his fourth time running Boston. The 56-year-old from Lexington was aiming for a personal record, under five hours, but a nagging pain in his heel that he noticed in January bloomed into agony during a half-marathon he ran in February. Just standing up hurt and walking has been difficult.

“My orthopedist said it would be incredibly abusive to my body to continue running,’’ he said. “He looked at me as I’m sure he looks at a lot of runners and said, ‘I hope you’re not thinking about doing this.’ ’’

Skier held out hope until last week that he would make it to the starting line. Then he called the Boston Athletic Association to ask for a medical waiver but was denied because he had not qualified and was running with an invitation. So, he will have to pay the $250 entrance fee again next year — if he can get an invitation for 2011.

Every year around this time, business booms for orthopedists in the Boston area.

Dr. Pierre d’Hemecourt of Children’s Hospital, co-medical director of the Boston Marathon, said this is the season to see many permutations of pain — hip problems, muscle aches, bone and tendon ruptures. But the hardest part, he said, is trying to convince runners when it’s time to give up.

“These are people who are really invested, and they don’t want to hear that they can’t run,’’ he said. “But sometimes that’s what they have to do if they want to run in the future.’’

Ruben Millor, who has worked as a massage therapist in Somerville for 22 years, said this week has been a typical one before the Marathon — more than half of his clients are runners. He said he often has to do as much mental therapy.

“There’s a lot of desperation when people are feeling pain this late,’’ he said.

Some of those unable to run have already spent thousands of dollars to fly themselves and family to Boston for the weekend. Some still plan to come to cheer others on; many can’t bear to watch.

Leanne Hjort is one of those people who will not give up.

In the last 18 months, the 47-year-old from Seattle has had brain surgery, ear surgery, and two knee operations, one of which was six weeks ago. Her left knee remains in shaky condition, but she has already spent more than $3,000 for her family to come out, and she wants more than anything to finish with her 19-year-old son, who also qualified to run.

“I’ve said all along that if I’m strong enough to get to the starting line, I’m going to give it my best shot,’’ she said. “But it’s been a roller coaster, with a lot of tears.’’

The veteran of 10 marathons recently got up to running 80 minutes at a time and vows to hobble to the finish if necessary.

“I’ve been thinking about writing a note on the back of my shirt that would say: ‘If found on the side of the road, please prop me back up and give me a little push in the direction of Boylston Street,’ ’’ she said.