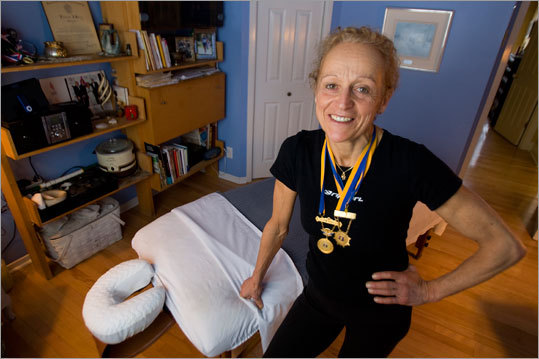 ST. ADELE, Quebec - Deep in the Laurentian Mountains, in a warm massage room with Beethoven and the aroma of homemade soup wafting through the air and a couple of gold medals glistening on the bookshelf, people still ask about Rosie Ruiz.

“I just laugh,’’ said Jacqueline Gareau, 56, who set a women’s course record to win the 1980 Boston Marathon only to find the cheater, Ruiz, already on the victory stand wearing a laurel wreath.

“It doesn’t bother me,’’ said the petite French-Canadian, who is now a massage therapist. “I don’t really think about her anymore.’’

Gareau considers herself a healer and a lecturer who preaches peace, health, happiness, and harmony. She likes to create “rivers of energy’’ for her clients, mostly word-of-mouth customers who come to her home.

“I’m an optimist,’’ she said. “Life is nicer when you think that way. I like to live in the present.’’

But marathoner Bill Rodgers, who won the his fourth Boston Marathon that warm April day, thinks Gareau got robbed of glory. The Boston Athletic Association apparently agrees. They awarded her two gold medals, belatedly and 25 years after winning the race.

“It was her ultimate biggest win and I don’t think the public is aware of her. She lost the moment,’’ said Rodgers. “I always say that the most famous marathoner of all time is Rosie Ruiz. I guess infamous is more accurate.’’

Rodgers is in awe at the way Gareau has handled herself through the years.

“She’s amazing,’’ he said. “She doesn’t have any ill feelings to Rosie at all. To lose this moment is pretty hard to deal with. She just kept cool under fire. She never said anything terrible about Rosie. She didn’t say anything negative about the BAA. She was just cool, and she’s the same way today.’’

“It doesn’t matter really because I won the Boston Marathon,’’ said Gareau. “That’s what’s important to me.’’

Over a bowl of broccoli soup, with fresh grated ginger, she gushes about her passion for running. Her 5-foot-2-inch, 103-pound frame is mean and lean. Her arms are buffed from giving massages, working with weights, and cross-country skiing. Her legs are toned from daily runs.

“The outdoors is my amusement park, but now I run for fun,’’ she said. “If I see a patch of raspberries, I’ll stop and eat them.’’

And she’s got news.

“I’m going to run Boston this year because it’s the 30th anniversary [of her victory] and I want to celebrate the joy of still being very fit,’’ she said. “I’ve had [knee] surgery so I have less cartilage, so I have to be smart. I know I would love to run sub 3:15 but I don’t want to put to much pressure on myself. I want to enjoy it. It’s just a pleasure being out there in the road in Ashland, Wellesley, the Newton hills.’’

“I want to see the crowds - my friends - that have been pushing me all of these years,’’ she said. “It will be great. I want to wave to the crowd.’’

Gareau believes she has received more than her 15 minutes of fame because of Ruiz.

“I went to Joan Benoit’s 10K Beach to Beacon run [in 2007] and they gave me another laurel wreath there. I could have about 10 laurel wreaths.’’

She has a big box full of medals and wreaths gathering dust in her basement. Not bad for someone who never ran a race until she was 21.

She grew up on a farm 100 miles northwest of Montreal. In college, she started smoking a half-pack a day. When she became a respiratory technician at a hospital, her life changed forever.

“I started treating people dying - always with a cigarette in their mouth - and I thought ugh, I’ve got to stop.’’

Out of the smoke emerged a runner.

The first time she started jogging, Gareau was so tired she slept all day.

“I learned about the endorphin kick and I guess I got addicted to that.’’

After finishing first in the Montreal International Marathon, and third in the New York City Marathon, Gilles Lapierre, a friend, fellow runner, and eventual manager, talked her into entering the Boston Marathon “because of the history.’’

“I remember saying that the laurel wreath would look good on me,’’ she said.

On April 21, 1980, things began poorly for Gareau at the starting line in Hopkinton.

Nervous before the race, Gareau left her spot with the other elite women in search of a bathroom. When she returned, Marathon official Jock Semple refused to let her back with her elite group.

“Semple was kind of yelling at me,’’ Gareau said. “He was angry for me being in front with the other girls. He said, ‘I’m going to disqualify you.’ So I went kind of in the back and I kind of zigzagged for the first 5 miles to catch up.’’

In 1967, Semple tried to physically stop Kathrine Switzer from becoming the first women to officially enter and run Boston. In 1980, Switzer was on the sideline, reporting from a golf cart as she followed the lead women. Switzer pulled near Gareau at Mile 22 and gave her the No. 1 sign.

“Kathrine, am I absolutely in first?’’ asked Gareau in an account from Switzer’s book, “Marathon Woman.’’

But after Kenmore Square, Gareau was stunned.

Second glance
It seems unfathomable today, but there were no high-tech safeguards in 1980. Security along the course was lax. So Ruiz slipped into the race close to the finish. Arms flailing, she ran down Boylston Street and broke the tape at the Prudential Center finish at 2 hours 31 minutes 56 seconds, more than three minutes faster than Benoit’s course record set a year earlier.

No fuss was made for Gareau, who finished in 2:34:28, which was a course record.

“I finished but I was by myself,’’ Gareau said. “There was no tape-breaking. I kept walking to the garage by myself and that’s when I saw Rosie.

“I remember walking by myself, kind of lonely.’’

But that would soon change.

“I knew something was wrong right away,’’ said Rodgers. “I was sitting in a chair and they were interviewing me. In comes Rosie and I thought, ‘Who the heck is that?’ She wasn’t very lean at all. I started asking her questions. She didn’t know anything about running.’’

Gareau laughs about it now.

“It was a little weird,’’ she said. “I looked at her a bit. I didn’t think she looked like the thin runner. Then lots of interviewers came back to me asking me if I saw her on the course. They told me she’s not answering the questions very well about training. I guess at that point I knew I won.’’

Gareau bad-mouthed nobody and returned to Montreal.

Backtracking
Pretty soon just about everybody knew something was wrong with the woman who wore W50 and had qualified for Boston by running a respectable 2:56:29 in the 1979 New York City Marathon.

New York officials immediately reviewed videotape of the finish and no Ruiz crossed the finish at that time. A freelance photographer remembered riding the subway with Ruiz to Columbus Circle, near the Central Park finish. Ruiz’s number was mistakenly recorded and she was immediately disqualified.

Boston officials proceeded cautiously. They poured over 10,000 negatives of the race and videotape footage provided by media outlets. Several witnesses reported seeing a woman with a number jump into the race near Kenmore Square. More than a week later, Ruiz was officially disqualified.

At a special ceremony in front of the Prudential, Gareau received her wreath and a gold medal equal to the size of the men’s medal.

Switzer said Gareau has a special place in history.

“Millions of people who had never heard of women running marathons finally did and had to admit that if a cheating incident was newsworthy, then the sport itself was worth taking seriously and that women now were real runners, trained and competitive, not patsy novices,’’ wrote Switzer in an e-mail.

Head-to-head meeting
Ruiz never admitted cheating. In 1982, she was arrested on larceny and forgery charges in New York for allegedly stealing $60,000 from her employer. Eighteen months later, she was arrested again, attempting to sell cocaine to an undercover agent at the Miami Airport Marriott. She served brief jail time in both cases.

In a bizarre meeting, Gareau and Ruiz came face-to-face after a 10k at Miami in 1982.

“She came up to me after the race and presented herself,’’ said Gareau. “ ‘I’m Rosie Ruiz.’ I recognized her.’’

“I was just finishing the race and I said, ‘Why did you do that?’ It just came out of my mouth,’’ said Gareau. “She answered me back that she ran it and she won it. So I just didn’t keep going with the conversation. No, I was not interested in talking more. She’s still saying it. She’s just a pathological liar.

“I feel just sad for her. I don’t hate her. No, I feel pity for her. It’s not fun to live with that feeling of being a cheater. Maybe it’s just better for her to say, ‘I’m sorry, I shouldn’t have done that,’ to feel more at peace.’’

In 2005, Gareau was named Grand Marshal of the Boston Marathon. “I was in a car waving to the crowd from start to finish,’’ she said. “I felt so frustrated for not running that year. They had me get out and run the last 100 meters and break the tape.’’

Gareau grabs a bite of chocolate and looks out the window. She loves the winter and the beauty of nature. But her thoughts are of spring. 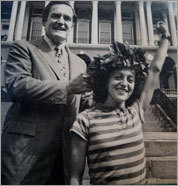