THIS STORY HAS BEEN FORMATTED FOR EASY PRINTING
Marathon Notebook 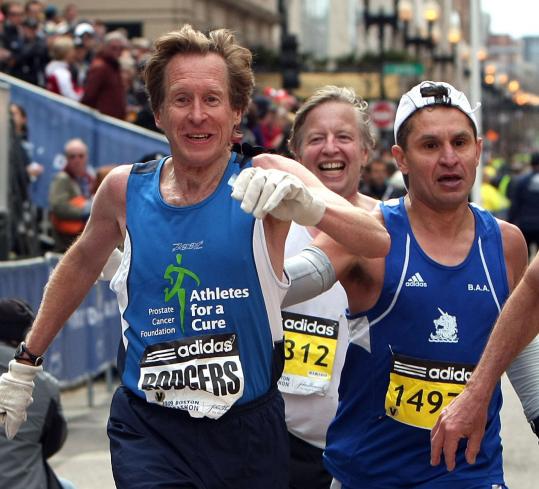 The 113th running of the Boston Marathon was no jog in the park. With cold and windy conditions throughout much of the day, the trek proved to be a labor-intensive effort that took its toll on four-time winner Robert Kipkoech Cheruiyot and women's runner-up Dire Tune.

Cheruiyot was thwarted in his bid to become the first man to win Boston four straight times when back problems forced the 30-year-old Kenyan to drop out at Cleveland Circle.

"He started experiencing a back problem right around 25K," said Cheruiyot's agent, Federico Rosa, in a statement. "They brought him to the hospital and he was there a short time."

Cheruiyot, who won in his Boston debut in 2003 but recorded a DNF a year later, was taken to St. Elizabeth's Medical Center in Brighton, where he was examined and released.

Tune, meanwhile, was literally run into the ground by women's winner Salina Kosgei of Kenya. The 23-year-old Ethiopian engaged Kosgei in one of the Marathon's most stirring footraces down Boylston Street, then collapsed from apparent dehydration after crossing the finish line one second behind Kosgei.

"She fell unconscious and they brought her to a hospital," said Tune's agent, Hussein Makke, who speculated that his runner wasn't prepared to run such a deliberate pace through the first 21 miles and wound up missing a few water stations along the way.

"She trained for a much faster marathon and was out there 13 or 14 minutes more than she wanted."

Tune was taken to Massachusetts General Hospital, examined, and released.

Fine finish for Rodgers
Ten years ago, Bill Rodgers was 51 and feeling fit enough to challenge for an age-group record in Boston. But when he reached Heartbreak Hill in Newton, he dropped out with dehydration.

"You don't want your last marathon ever to be a DNF," said Rodgers, a four-time Boston winner. "It's a very depressing feeling, plus I had my daughter, Elise, waiting for me at the finish line that day."

Although his glory was deferred by a decade, Rodgers finally reached the finish line, despite being slowed by a head cold and a nasty headwind that threatened to derail him near the 14-mile mark. Buoyed by the crowds and encouraged by running partners Ed Knights and Jesus Estrada, Rodgers finished in 4:06:49.

"It was truly, maybe, the most fantastic Boston, in a certain way, that I've ever run," said Rodgers, "because I've never seen so many people on the course, so many people running. It was like the 100th Boston, in a way. It was a terrific celebration. I just wish I could've run a little better. My legs were pretty shot."

With his 24-year-old daughter again waiting, Rodgers made it to the finish.

"I wasn't going to drop out this year," he said. "I've done that enough times here. I was going to finish on my hands and knees if I had to."

Harten flying high
Patrick Harten, 35, of Long Beach, N.Y., probably would have run unrecognized - as he did last year in his Boston debut - but yesterday there was something familiar about his bib number: 1549.

Harten was the air traffic controller who worked with US Airways captain Chesley Sullenberger, pilot of Flight 1549 that made a successful ditch into the Hudson River Jan. 15.

"It was a traumatic event for me, initially," said Harten, who turned to running as a means to cope with stress. "As I've processed it, now I appreciate it for what it was: a miraculous event with a happy ending. You don't get too many of those."

Asked how Sullenberger reacted in the split-second he decided to land his disabled aircraft in the Hudson, Harten said, "He's the ultimate professional and calm under fire. A great guy. I've met him a couple of times. Jeffrey Skilles, the first officer and co-pilot, he's another amazing pilot. I think he's flying his first flight today, if I'm not mistaken."

"I looked at last year's numbers and results and I figured they were probably going to give me a number between 1,000 and 2,000," Harten said. "So I thought, 'How cool would it be if I got the number 1549?' So I shot them an e-mail and asked, figuring it doesn't hurt to ask if I can have it, and they were kind enough to give it to me."

Harten responded by recording a personal best of 2:47:19.

"I beat my goal by about three minutes," he said. "Obviously, when I'm running, especially on long-distance runs, you work out a lot of stuff and I logged a lot of miles in preparation for the Boston Marathon thinking about the events of that day and it helped me come to terms with it."

Inspirational journey
Richard Whitehead, 32, of Nottingham, England, made his Boston debut and, with the help of a pair of running guides (Uri Fume and Chuck Engle), he completed the trek in 3:02:44, which was about six minutes shy of the world record he set three weeks ago in Rome - for a double amputee.

Wearing prosthetic legs designed for running, Whitehead said he was overwhelmed by the strong reaction he got from fans along the route.

"It's a really tough course, a lot of rolling hills, and it was very windy," Whitehead said. "But the massive crowds really push you through. Plus I had two great guys who were running with me.

"It's a great race and the massive support all the way from Mile 1 to 26 miles really inspires you."

Whitehead hopes to inspire other amputees to take up running.

"As a disabled athlete, you want to be treated the same as everybody," he said. "Running is such a free-spirited sport, it makes you feel alive and makes you push your limits."

Flag bearers
The victory by Ethiopia's Deriba Merga marked only the third time since 1991 that a non-Kenyan had claimed the men's title. South Korea's Lee Bong Ju won in 2001 and Merga's countryman Hailu Negussie won in 2005. The only other Ethiopian victor was Abebe Mekonnen in 1989 . . . Merga vaulted into second place in the World Marathon Majors men's race with 30 points, 10 behind Kenya's Sammy Wanjiru, who will run London Sunday. Kenya's Salina Kosgei, meanwhile, moved into a third-place tie with Romania's Constantina Tomescu-Dita and Russia's Alevtina Biktimirova with 30 points, behind Germany's Irina Mikitenko (50) and Tune (40) . . . Cheruiyot (not to be confused with Robert Kiprono Cheruiyot, who finished fifth) is the fourth man who tried and failed to win four straight races here. Clarence DeMar finished second to Chuck Mellor in 1925, Rodgers was third behind Toshihiko Seko and Craig Virgin in 1981, and Cosmas Ndeti was third behind Moses Tanui and Ezekiel Bitok in 1996.
Still going strong
Neil Weygandt and Bennett Beach each kept their Boston Marathon streaks alive. Weygandt, 62, of Drexel Hill, Pa., completed his 43d straight race in 4:45:38 while Beach, 59, of Bethesda, Md., finished his 42d run in 4:48:32 . . . Celtics co-owner Wyc Grousbeck had a full day, as the 47-year-old completed the marathon in 4:16:49 and then retreated to TD Banknorth Garden for Game 2 of the Celtics' first-round playoff series against the Chicago Bulls.

John Powers of the Globe staff contributed to this report.