Twists in the road 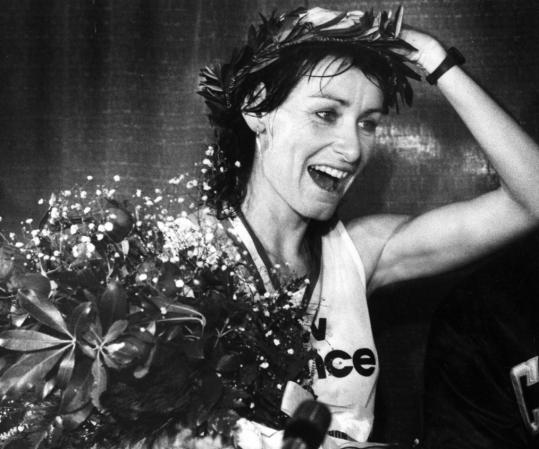 Twenty-five years ago, Lorraine Moller donned the laurel wreath as women's champion of the Boston Marathon. It remains one of the highlights of her career. (File/Wendy Maeda/Globe Staff)
By Barbara Matson Globe Correspondent / April 16, 2009
Text size – +

Running was the easy part.

Lorraine Moller won the first marathon she ran - a race she hadn't even intended to finish - and the next eight as well. The brilliant runner from New Zealand was both pioneer and champion, winning three world championships (1980, '82, and '84) and three Osaka Marathons (1986, '87, and '90). The only runner to race in each of the first four women's Olympic marathons, Moller claimed the bronze medal at the Barcelona Games in 1992 at the age of 37. She won the Boston Marathon in 1984, and she's back to celebrate the 25th anniversary of that victory.

"When you've won a race, you fall in love with the place," said Moller. "And of all my accomplishments, I can tell people I won a medal in the Olympics and they'll say, 'Wow,' and I can tell them I won the Boston Marathon and I'll get an equal 'Wow.'

"I'll always be very proud of it."

For all her smooth striding on the roads, Moller often stumbled on her emotional odyssey, though she was determined to build a strong spiritual base for her life. Now 53 and living in Boulder, Colo., with her husband and 8-year-old daughter, Jasmine, Moller finds she can look back at her improbable journey with affection, but she had to write it all down to make peace with it.

When Moller started running, the longest competitive race she could enter was 800 meters. Women were told distance running would damage their reproductive organs and ruin their health. Moller was among the brave few who changed the world. Her recent memoir, "On the Wings of Mercury, the Lorraine Moller Story" (not yet released in the United States but a top seller in New Zealand), is a vivid, unrestrained telling of her remarkable life, particularly the mental workouts that were as constant and as demanding as the mileage.

"It was very interesting for me writing the book; it was a cathartic exercise," said Moller, whose tales include rocky relationships, a difficult first marriage, and her efforts to end the restrictive amateur rules that did not allow runners to accept prize money but looked the other way at all kinds of alternative payments. Along the route, she adopted the winged god, Mercury, as her inspiration and guide.

"In some ways, I felt like I could walk away from the whole story and look at it objectively," she said. "A lot of the things that were tender and frightening, once they were put on the page, they lost their hold over me. And I actually could read them over - things that I'd cried about, or gotten very angry about - and then when I'd read them, I'd think, 'Oh, that makes a good story.' And a lot of them are very funny."

Moller was a sickly little girl who grew up in a large family in the small town of Putaruru, and suffered for several years with a kidney ailment that defied medications. One of the strongest memories of her childhood is the sound of her mother's footsteps echoing down the hospital corridor, inexorably fading away as 5-year-old Lorraine was left alone in the hospital for weeks of treatment.

After several years, Moller was finally healthy, and she began running as a schoolgirl, barefoot on the grass tracks of New Zealand. She soon discovered her talent and immediately inspired her father, Gordon, to take up running, and the pair spent many hours running through the pine forests near her hometown. When Moller was 14, she got the chance to run in the 880-yard race in the national championships on a cinder track. So she got her first pair of spikes, but her father had to take them to a garage to get the long steel prongs ground down.

"There weren't any running shoes then," Moller said. "We ran in our canvas sneakers on the road. I didn't know any better, I just made it up as I went along. There was no real road map."

While at university, Moller began competing at international meets for New Zealand. With no professional opportunities for female runners, she took a job teaching after graduation. But after a year, she moved to America in pursuit of a running career, as well as marathoner Ron Daws.

Moller was still a track athlete when she ran her first marathon, the 1979 Grandma's Marathon in Duluth, Minn. Moller went along at the last minute with her boyfriend/coach, Daws, intending to use the first 20 miles as a training run, and then drop out. But when she got to 20 miles, she was leading. She couldn't very well drop out then, so she kept running - and won the race in 2 hours 37 minutes 36.5 seconds, then the sixth-fastest time ever run by a woman.

Winning the race was easy. Dragging along her boyfriend proved more difficult, and Moller is frank about the failed marriage to Daws that followed.

"When I came to the States, I was with Ron Daws - I was basically living off him," she said. "It was a fairly common scenario in those days for a woman who was a runner. The relationship became a power struggle. It doesn't work that well, but it was a man's world. We felt we had to have a man around."

There was not yet prize money to earn in road races, and women were not always welcome, but Moller never slowed her pace. She was enthusiastic about races and romances, in almost equal measure.

"Oh, it was so exciting," she said. "I got to travel all over. I got to be in this marathon in Rio de Janeiro. I'd never been to anyplace like that. When I got there, there were a thousand starters and three of them were women. It was like you were creating ripples wherever you go. History was being made and it didn't require anything more than showing up.

"I got to the point where I felt like I could go out any day to run a marathon in the 2:30s. What was difficult for me was finding the partner in life I wanted."

Moller retired from competition after the Atlanta Games in 1996, but found her life remained challenging. She had remarried, to contractor Harlan Smith, but instead of building the family she wanted, she suffered a series of miscarriages. She was told she had little chance of having a baby.

Instead, she gave birth to a 9-pound daughter at age 45. These days, she is a mother, a part-time running coach, an author, and cofounder of the Arthur Lydiard Foundation, dedicated to promoting and preserving the work of the late New Zealander whom Moller called "the grandfather of the training methods that all serious runners use."

"I always wanted to figure out how things work," she said, "and being an athlete is a wonderful way of exploring that connection, the relation between my emotional and running life. You need that kind of intensity to focus that energy. It's so easy to get sidetracked, especially when we have unresolved conflicts."

Moller will be at the Newton Running booth at the Runners' Expo this weekend at the Hynes Convention Center, where copies of her book will be available.