NHL draft could be a trade show

Buzz is about deals more so than picks 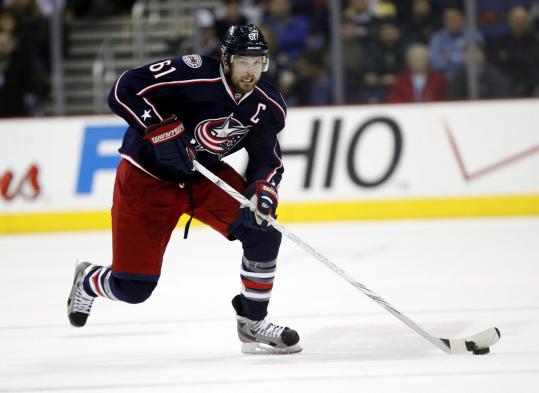 Columbus captain Rick Nash is there to be had for the right price. (Terry gilliam/Associated Press)
By Fluto Shinzawa Globe Staff / June 22, 2012
Text size – +

PITTSBURGH - Friday night at Pittsburgh’s Consol Energy Center, the 30 teenagers whose names will be called at the NHL draft are almost an afterthought.

Around the NHL, it is trade season.

“There’s a lot more chatter this year at this time,’’ said Bruins general manager Peter Chiarelli in a conference call earlier this week.

There is little debate about the identity of the best youngster available. Dynamic Russian Nail Yakupov is the No. 1 prospect. Edmonton has the first pick for the third straight year, and it could add Yakupov, a skilled and gritty forward, to a draft bounty that already includes Taylor Hall and Ryan Nugent-Hopkins.

“He plays a pretty aggressive, physical style,’’ said Kyle Woodlief, chief scout of the Red Line Report. “He has a pretty reckless body and a willingness to drive the net hard. He’ll stick his nose into the traffic areas. He’s not at all a perimeter guy.’’

The certainty of Yakupov’s draft position and the subsequent dropoff of high-end talent have added to the trade buzz. The centerpiece is Columbus power forward Rick Nash. Another name to go could be goaltender Roberto Luongo, whose tires were never inflated to proper pressure in Vancouver. Anaheim winger Bobby Ryan, picked second in 2005 after Sidney Crosby, also could be available.

In comparison, the no-name youngsters - most are several years away from cracking the NHL - can hardly be expected to produce as much star wattage.

There are several reasons why the trade talk has geared up heading into the weekend. First, there are picks involved. Last year, Philadelphia general manager Paul Holmgren swung a sledgehammer at his roster by wheeling Mike Richards to Los Angeles and Jeff Carter to Columbus. As part of the total return, the Flyers received the Blue Jackets’ first- and third-round selections and a second-rounder from the Kings.

Second, supply among unrestricted free agents is thin. Come July 1, providing they don’t re-sign with their clubs, Nashville’s Ryan Suter and New Jersey’s Zach Parise will be the UFA headliners. Detroit, having lost defenseman Nicklas Lidstrom to retirement, is expected to pursue Suter aggressively. Parise, a Minnesota native, should draw interest from the Wild.

But after Suter and Parise, there is no elite talent available to sign. Alexander Semin, Dennis Wideman, and Jaromir Jagr are in the second tier of UFAs.

Around the league, GMs have been prompt to re-sign their players before they reach free agency.

The Rangers should be in the bidding for Nash. They made a push for the winger prior to the trade deadline.

Toronto requires a goaltending upgrade, and Luongo would be the best candidate to take over the job currently held by James Reimer.

The Bruins, though, are not expected to be major trade players. The only trade Chiarelli has made at the draft that qualifies as an eye-opener took place two years ago in Los Angeles, when he dealt Vladimir Sobotka to St. Louis for David Warsofsky.

Instead, the Bruins will study what Chiarelli considers the secondary trade market. It takes place in the days and weeks following the opening of free agency, when bargains are more available.

“The reality is that the trade market right now is most active,’’ Chiarelli said. “What will happen is, come July 1, that will take a bit of a back seat to free agency. Once you go through that, the trade market will reemerge.

“Right now, with the trade market the way it is, I may make some calls. Frankly, I’m more apt to wait until the free agent market and the secondary trade market. My objective will probably be to wait until something falls in my lap.’’

For now, the Bruins are standing pat because Chiarelli and his hockey operations colleagues are confident in their roster. They also do not have much cap space.

They will have a $5 million millstone in Tim Thomas’s contract on their 2012-13 books. It is a burden they hope to shed, either via trade or waivers, and apply some of the savings toward Tuukka Rask’s next contract.

Some of the Bruins’ competitors will not be so patient. Washington has 11 picks, including two in the first round. Carolina has three picks in the top 50, and the Hurricanes have plenty of cap space. San Jose, dismissed in the opening round of the playoffs yet again, will be looking to improve.

It all starts with Columbus and what the Blue Jackets can get for Nash.