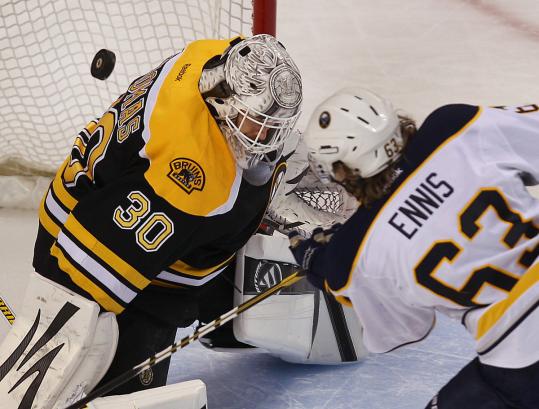 The way Brad Marchand tells it, he was just being a good teammate.

In the third period of Saturday’s 4-3 shootout win over Buffalo, Marchand missed on a shorthanded breakaway. Had Marchand buried his shot (the left wing scored later in the third), he would have ended the regular season with 29 goals, tied with Tyler Seguin for the team lead.

Instead, Seguin finished with the goal-scoring title. Seguin scored twice in the win to end his second season with 29 goals and 38 assists for a team-best 67 points.

“I missed it on purpose because he was crying about how he wanted it before the game,’’ Marchand said. “So I let him have it.’’

Seguin will carry at least a $1.75 million cap hit this year because of his sparkling sophomore season. Seguin hit six of his attainable Individual A bonuses, which are each worth $212,500. Individual A bonuses are capped at $850,000 total. Seguin has a $900,000 base salary.

Seguin earned his bonuses because he netted 20 or more goals, had 35 or more assists, and recorded 60-plus points. Seguin also reached three other thresholds by averaging 0.73 points or more per game (0.83), being among the top three team forwards in plus/minus rating (plus-34), and being named to the All-Star game.

The 20-year-old Seguin became the youngest player in Bruins history to lead the team in scoring.

“It’s pretty amazing,’’ Seguin said. “It’s definitely an honor. I didn’t know that. My linemates make the game a lot easier for me.’’

Seguin can earn an additional $1.8 million in Individual B bonuses, such as winning the Conn Smythe Trophy as the postseason MVP.

Torey Krug was a healthy scratch Saturday, ending the defenseman’s run with the Bruins. Krug is not eligible to play in the postseason.

Krug appeared in two games after signing with the Bruins March 25. Because Krug reported directly to the big club, he burned one season off his three-year entry-level contract. Krug will have two years remaining on his deal when the 2012-13 season kicks off.

Krug most likely will start next season in Providence. However, the puck-moving defenseman didn’t look out of place in his two-game NHL stint. Krug looked especially comfortable in Thursday’s 3-1 win over the Senators. Krug had to assume more shifts after Adam McQuaid was shut down early in the second period. Krug assisted on Milan Lucic’s goal to record his first career NHL point.

Krug is likely to remain with the club throughout the playoffs as a practice player.

Brian Rolston was a healthy scratch for the regular-season finale. Rolston finished the season with seven goals and 17 assists in 70 games.

“He’s played a lot of hockey for us since he’s been here,’’ Julien said. “He’s played well, so I think rest will do him some good.’’

Rolston gives the Bruins options in the postseason. Rolston most likely will open the first round on the No. 3 line with Benoit Pouliot and Chris Kelly. Rolston also recently centered the fourth line when Gregory Campbell sat out against the Rangers because of a sore foot.

Rolston also gives the Bruins different looks on the power play. Of late, Rolston has been the slot man on a unit with David Krejci and Lucic.

On Saturday, Kelly became the only Bruin to appear in all 82 games. Patrice Bergeron was healthy enough to play in all 82, but he was given a rest against Ottawa Thursday.

Kelly finished the season with 20 goals and 19 assists. It was the first time Kelly hit the 20-goal mark.

Johnny Boychuk and McQuaid didn’t play. Boychuk sat out his second straight game because of a mild left knee sprain. Julien is expecting Boychuk to be available for Game 1. “I don’t see any reason right now why he shouldn’t be ready for the start,’’ Julien said . . . McQuaid played only eight shifts against Ottawa Thursday because he didn’t feel right. McQuaid had missed the three previous games because of a cut above his left eye. No word on whether McQuaid will be good to go come Game 1. “He’s just a little off right now,’’ Julien said. “As long as he’s a little off, we’re not moving forward with him. He might be OK for Thursday, which is when I anticipate it’s going to start, but if he’s not, we’ve got some other guys.’’ . . . There is no clarity on whether Tuukka Rask (lower abdomen/groin strain) will be healthy enough to back up Tim Thomas for the start of the opening round. If Rask isn’t ready, Anton Khudobin will be Thomas’s No. 2. Khudobin backed up Thomas Saturday. “Hard for me to predict,’’ Julien said of Rask’s availability for Game 1. “If everything was going extremely well, you’d say he’s got a chance. But if at one point he stalls a bit or just stays the same, you’re saying he won’t be ready for the start. It’s hard to tell if anybody knows. I don’t. Neither does the medical staff.’’