THIS STORY HAS BEEN FORMATTED FOR EASY PRINTING
Hurricanes 3, Bruins 2

Hurricanes prove to be no breeze for the Bruins 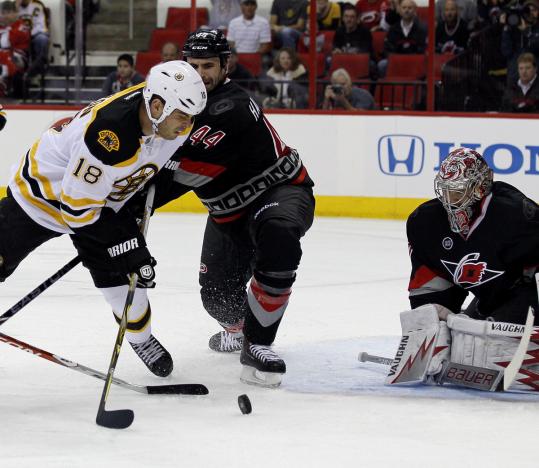 RALEIGH, N.C. - After their third loss in four games, the feeling in the dressing room wasn’t one of concern last night. But following a 3-2 loss to a previously winless Carolina club before 16,483 at RBC Center, the Bruins were more puzzled than worried about how they’ve stumbled to start their Stanley Cup defense.

“I would lie if I said there was no disappointment,’’ said captain Zdeno Chara. “So yeah, there is. We were close in all the games we’ve lost. Just a one-goal difference. I think we have a better team than that. It is a little bit disappointing. At the same time, there is no reason to panic. It’s still early. But we all realize that we need to get better.’’

Claude Julien liked what he saw from his players in the third period. They pushed, fought, and battled. They jacked up their puck-possession time.

But the Bruins coach didn’t care for what he saw in the first 40 minutes. The Bruins didn’t have the same emotional engagement. They were foiled, yet again, by a power play (0 for 5, seven shots) with as much life as a BlackBerry the last few days.

“We tried to compete a little harder in the third,’’ said Julien. “But a couple mistakes and the puck was in our net. You’ve got to fight through those things. Those are things that happen through a season. Guys just have to get together here. Everybody’s got to find a way to play some better hockey. If we do that, we’re going to turn things around.’’

Under Julien, the Bruins have always performed when they’ve been backed into a corner. During last season’s playoffs, the Bruins made a habit out of digging out of 0-2 holes.

That trend appears to be continuing this season. After falling behind, 2-0, the Bruins didn’t buckle. Tyler Seguin winged a bad-angle shot over Cam Ward’s glove at 4:07 of the third to make it 2-1.

Carolina reclaimed its two-goal lead later in the third. After the Bruins committed two defensive-zone cough-ups, Jiri Tlusty snapped a shot from the slot past Tim Thomas at 13:32. Even then, the Bruins kept digging.

With Thomas pulled for an extra skater - perhaps telling that it was Gregory Campbell instead of a top-six gunner - the Bruins made it a one-goal game again. After taking a cross-ice pass from Patrice Bergeron, Brad Marchand hammered a one-timer over Ward at 16:35.

Had the Bruins simply performed with such urgency in the first two periods, they might not have been trailing. But for some reason, they couldn’t generate the energy required to grab an early lead. Too often, they played like they had a lineup full of good friends on the other club instead of finishing their checks and skating with some anger.

“They came out very hard. They always seem to come out tough in their building,’’ Marchand said. “They have a pretty good crowd that they can use to their momentum. We just got caught sleeping a little bit. They got some good momentum, got the first goal, and we kind of sat back. I thought we had a good push in the third period. I think we can take some positives from that.’’

After a scoreless first period, the Hurricanes snapped the 0-0 score with a power-play goal at 0:42 of the second. With Chris Kelly in the box for hooking, Joni Pitkanen set up on the right wall. At the same time, Eric Staal set up shop in front of Thomas. Dennis Seidenberg gave Staal several whacks, but couldn’t budge the No. 1 center. Pitkanen flipped a sharp-angle shot on goal that deflected off a skate, according to Thomas, and found the back of the net.

“The first one was going wide, then it hits off a skate,’’ said Thomas (31 saves). “That happens when you throw it backdoor from there. If anything, we should start doing the same thing more often. It’s going to go off the other team’s skates.’’

At 3:42 of the third, the Hurricanes doubled their lead. The Bruins lost puck battles all around the boards, which led to Anthony Stewart getting a good net-front look. Thomas had to battle through a Tim Brent screen, and before he could get a bead on Stewart’s shot, it was behind him.

“You don’t want to make excuses. We have to play better than that,’’ Thomas said. “We have to match other teams’ desperation and be ready for other teams’ best efforts. We just have to start doing it. We’re not that far off. The difference between us having the results we want and the way it happened tonight isn’t that far off.’’

“I’m certainly not second-guessing the team in that dressing room about wanting to win,’’ Julien said. “I think it’s more about seeing the effects of guys just not having found their game yet. It’s frustrating because other teams are coming hard at us. We’ve just got to persevere and fight through it. Once we turn the corner, we’ll be OK. But we’re going to have to fight real hard to do that.’’