Krejci out after practice injury 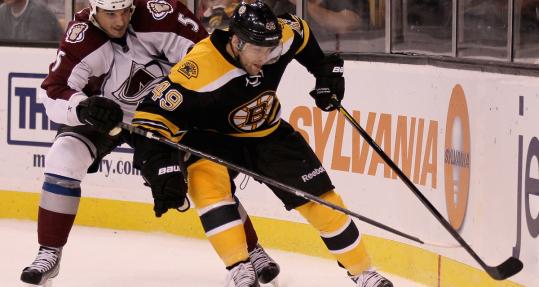 WILMINGTON - After Monday’s 1-0 loss to Colorado, Bruins coach Claude Julien hinted that a shakeup of his unproductive first line might be in the works, as the Milan Lucic-David Krejci-Nathan Horton unit was shut out for the second time in three games this season.

For now, the Bruins will have to do so without Krejci, who was ruled out of tonight’s game against the winless Hurricanes at Raleigh, N.C., after he suffered an undisclosed injury in yesterday’s practice at Ristuccia Arena.

Krejci remained in Boston for further evaluation, and his status for Saturday night’s game at Chicago remains uncertain.

“I can’t really tell you the severity of it right now,’’ Julien said. “He’s being looked at.’’

Asked if he could characterize Krejci’s injury as being of the lower-body variety (read: leg), Julien replied wryly, “It’s a body.’’

Krejci and his linemates were the first to take the ice 20 minutes before practice to get in extra work.

“We just went out there to have some fun, pass the puck around, and take some shots, that was the main thing,’’ Lucic said. “Just get the fun feeling back into it.

“We want to enjoy being out there again, get that frustration out, and try to get back to playing to how we know we can play.’’

The first-line skaters have combined for just one goal (by Krejci), one assist (by Lucic), and 13 shots on goal (but just one by Horton).

“Right now it’s a line that isn’t maybe clicking on all cylinders,’’ Julien said. “We’re three games into the season and we’d all like to see them do better, but it’s a work in progress right now.

“Some guys find their game quicker than others and we’ll work through it. It’s part of the process, and if we start panicking three games in, we’re in trouble.’’

Peverley extended For the first five seasons of his professional career, Rich Peverley paid his dues toiling in the minor leagues for outfits such as the South Carolina Stingrays and Reading (Pa.) Royals of the East Coast Hockey League and the Milwaukee Admirals in the American Hockey League.

Yesterday, the 29-year-old forward from Guelph, Ontario, reaped the reward for his persistence, as he signed a three-year contract extension.

Peverley, who is in the second year of a two-year deal worth $2.65 million, got an extension worth $9.75 million - an annual cap hit of $3.25 million - that will keep him in Black and Gold through the 2014-15 season, according to multiple reports.

“It’s nice to get it done and nice to be part of a great organization here,’’ said Peverley, who was traded to the Bruins along with Boris Valabik by the Atlanta Thrashers Feb. 18, 2011, in exchange for Mark Stuart and Blake Wheeler. “It’s obviously one of the best in the league and we’ve proven that last year.’’

Peverley, who scored a pair of goals in Saturday’s 4-1 win over the Lightning, played in 23 games with the Bruins last season, posting 4-3-7 totals in the regular season and 4-8-12 during the playoffs.

“He’s deserving of everything he’s gotten,’’ said Patrice Bergeron, Peverley’s linemate. “He worked hard for it and he’s a great player.

“It’s unbelievable that now he gets recognized, all of a sudden, because even when we were playing Atlanta, I thought he was a great player and was always tough to play against and always worked hard and was tough on draws.’’

His other linemate, Brad Marchand, said, “We’re all very happy that he’s going to be here for a few more years. He’s a great player and he’s very fast, very quick, and great with the puck.

“I certainly feel like our line is starting to jell every day, and hopefully will continue to build and create more opportunities each game.’’

Peverley was one of seven potential unrestricted free agents whose contracts expire at the end of the season, but general manager Peter Chiarelli said the team took a proactive approach, citing Peverley’s “grit for his skill package’’ and the fact that “his speed backs up the D and it made us a faster team.’’

Added the GM, “He’s a player that we’ve always coveted, and we were fortunate to get him last year. Maybe we’ve waited a little bit longer in signing some guys that are potential UFAs, but we just decided to move forward with Rich.’’

Asked if he intended to pick up the tab for the team’s dinner last night, Peverley smiled and said, “I don’t know, that doesn’t start till next year - the contract - so we’ll see.’’

Waiting list Chiarelli was mum on whether the team was in negotiations with any other UFAs. Asked why the Bruins were proactive with Peverley over the others, Chiarelli said, “It’s tough when you have a lot of unrestricted free agents, and you don’t want to slight the other guys by choosing one over the others, but this is - that’s the business and you have to act on some and wait on others.’’ Those who remain in wait are Daniel Paille, Johnny Boychuk, Joe Corvo, Chris Kelly, Gregory Campbell, and Shawn Thornton . . . The Bruins made a couple of roster moves, removing defenseman Andrew Bodnarchuk and center Josh Hennessy from the injured/non-roster list. Both cleared waivers and were assigned to Providence. Forward Yannick Riendeau was assigned to Reading (ECHL) . . . Versus, which will televise tonight’s game, will have a behind-the-scenes look at the Bruins’ Stanley Cup ring ceremonies and banner raising during the second half of the network’s new studio show, “NBC SportsTalk,’’ which airs weeknights from 6-7 p.m.