A retreat before the charge

Team-building done off the coast of Maine 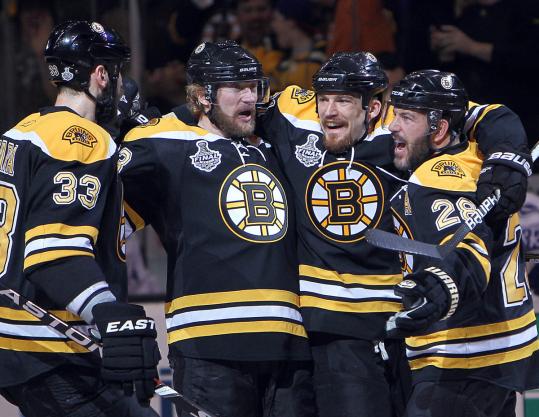 Andrew Ference (second from right) says lessons taught by the retired Mark Recchi (right), a great leader, will live on in the Bruins as they try to defend their title. (John Tlumacki/Globe Staff)
By Michael Vega Globe Staff / October 4, 2011

The website for Diamond Cove on Great Diamond Island, off the coast of Maine, touts it as the state’s premier island community boasting breathtaking views, spectacular sunsets, sheltered beaches, and acres of old-growth forest, all just a short ferry ride from Portland.

With Diamond Cove’s setting serving as a perfect backdrop, the Bruins yesterday wrapped up a two-day retreat where the Stanley Cup champions engaged in team-building activities aimed at cementing relationships among newcomers and returning veterans.

“It’s certainly important to us for numerous reasons,’’ coach Claude Julien said in a teleconference yesterday. “First of all, we’ve been apart for a good portion of the summer and, obviously, this summer was shorter than others.

“What we liked about it was that it brought everybody back together and it [reset] the clocks back to the right time and basically put everybody on the same agenda,’’ Julien said. “I think our guys enjoy spending time together, especially this year, which was a little bit different from other years.’’

Julien cited 13 home games among the first 17 games of the season as one reason to put the team through these activities, which have become common around the NHL.

“We’re not going to get a chance to spend a lot of time together as a group and get real comfortable,’’ Julien said. “When you’re at home, you go your own way, and you have your family and you have your agenda and those make it a little harder for guys to bond together.

“But this is a great opportunity and a great chance to start off on the right foot.’’

Last year, the Bruins wedged a retreat to Waterbury, Vt., between the end of the preseason and the season-opening trip to Prague.

“Every year we’ve done this team-building and we’ve given ourselves a challenge, because there always is a challenge,’’ Julien said. “I think the big thing that remains this year is we know it’s going to be challenging to get back to where we were and be repeat champions. So understanding that, we have to make ourselves better.’’

Asked what he got out of the retreat, Patrice Bergeron said, “I think, obviously, it’s one of the tools to make us a better team, a better individual, and a better leader. So you have to take those activities and approach it seriously and I think everyone does that and everyone has fun doing it.

“Everyone has fun going out there as a group and as a team and spend some days together and just learn and get to know each other. Yeah, we’ve been together for a couple of years now, but there’s some new guys that we need to bring into the group and make them feel comfortable and make them feel a part of us. So I feel like these days are helping doing that.

“Obviously with what happened last year and coming into this year, we have some challenges in front of us to address and talk about and it’s the perfect time to address such things and move forward.’’

Gone, not forgotten The Bruins took time to reflect on the impact Mark Recchi had on last season’s club.

His absence is one of this season’s challenges.

“You lose him as a person, and his leadership, but what we gained as teammates, whether it was some of us older guys or some of the newer guys, he taught us so many lessons,’’ Andrew Ference said. “First off, how to play, and the desire and the drive that it takes to win, and just his style of leading. It’s a natural kind of a leadership quality that he had.

“He was just himself and he did things the right way and as much as we’re going to miss him as a person and a leader, we gained so much from him from the time that he was here that his legacy is going to continue on in a lot of us guys, especially the young guys.’’

Has a nice ring to it The Bruins’ Stanley Cup rings will be unveiled tonight during a team dinner at the Boston Harbor Hotel. A lucky fan will get the chance to win a ring when the Boston Bruins Foundation hosts a raffle, with tickets ($5 each) going on sale tomorrow morning at 10 at www.bruinsraffles.org.