With Cup, no need for splash 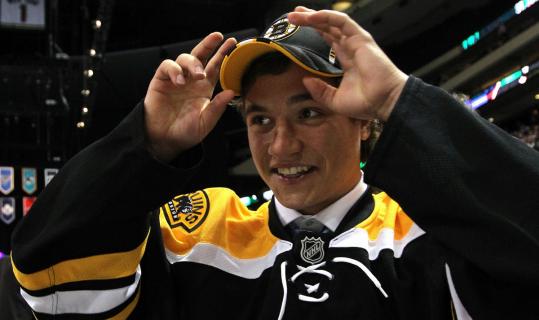 High-scoring forward Alexander Khokhlachev was the Bruins’ choice in the second round. (Getty Images)
By Fluto Shinzawa Globe Staff / June 26, 2011

ST. PAUL — The Bruins concluded their draft yesterday in a manner befitting a Stanley Cup champion that is in good cap shape and boasts a strong returning roster — by doing nothing out of the ordinary.

General manager Peter Chiarelli fielded calls throughout the weekend, but in the end he didn’t make any moves. The Boston contingent lounged in the far right corner of the floor — a privilege from winning the Cup — and filled their prospect bin with five more youngsters who someday hope to match the achievements of their 2010-11 predecessors.

“Our younger players really made a big step up this past year,’’ said assistant GM Jim Benning. “With the depth we have and the young players coming, we feel like we’re in pretty good shape heading into July 1 [the start of free agency].’’

The Bruins didn’t have their own second-round pick, having traded it to Ottawa Feb. 15 for Chris Kelly.

But they had a second-rounder as part of the Chuck Kobasew trade in 2009 with Minnesota. So with the No. 40 overall pick, the Bruins selected 17-year-old forward Alexander Khokhlachev, the No. 3 rookie scorer in the Ontario Hockey League last season.

“He’s a skilled player,’’ said Benning, who mentioned Scott Gomez as a comparable. “Loves to score. For a Russian player, he’s real competitive. He’s strong on the puck. He’s an elusive skater. From the blue line in on the offensive end, that’s the strength of his game.’’

Khokhlachev is a 5-foot-10-inch, 188-pound lefthanded shot who hails from Moscow, but opted to go the major junior route upon the advice of his parents and agent.

As a rookie for Windsor, Khokhlachev had 34 goals and 42 assists in 67 games. Twelve of Khokhlachev’s goals came on the power play. He trailed only Sarnia’s explosive first-year duo of Nail Yakupov (101 points) and Alex Galchenyuk (83) in rookie scoring.

During the playoffs, Khokhlachev led all rookies with nine goals and 11 assists for 20 points in 18 games.

Khokhlachev is the second Russian the Bruins have picked in the last two years, after defenseman Maxim Chudinov in the seventh round in 2010. But where Chudinov is a Kontinental Hockey League player, Khokhlachev is committed to the OHL, which makes signing him a stronger possibility.

“The Russian factor, after we got to know him, wasn’t much of a factor for us,’’ Benning said.

Khokhlachev will return to Windsor for the 2011-12 season.

The Bruins also did not have their own third-round pick, having packaged it with Dennis Wideman and a 2010 first-rounder to Florida in exchange for Nathan Horton and Gregory Campbell.

But they owned Phoenix’s third-round pick, acquired at the 2010 trade deadline for Derek Morris. It had been a fourth-round pick, but became a third-rounder once the Coyotes re-signed Morris after the 2009-10 season.

With the pick, the Bruins selected bruiser Anthony Camara, who had eight goals and nine assists while racking up 132 penalty minutes last season for Saginaw of the OHL.

“Prioritizing the little things,’’ Camara said of his game. “Block the shots, get the puck out, take the hits, make a play, drop the gloves, not scared of anyone.’’

According to hockeyfights.com, the 6-1, 194-pound Camara, a forward, dropped the gloves 16 times during the regular season, then on three more occasions in the playoffs.

“He’s a typical Boston Bruin-type player,’’ Benning said. “He’s a good skater. Plays a north-south game. Will fight anybody and take anybody on. He hits on the forecheck.

“When he was there in the third round, it was a good fit with his style of game to the way we play. He’s not tall, but he’s thick and he’s a fearless player. Kind of a Shawn Thornton type for us.’’

In the fourth round, the Bruins selected Brian Ferlin, a 6-2, 207-pound, right-shot power forward. Ferlin played for Indiana of the USHL last year, recording 25 goals and 48 assists. The native of Jacksonville, Fla., will attend Cornell this fall.

“He does the things that we covet,’’ Benning said. “He’s strong along the wall. He’s strong protecting the puck. He takes pucks to the net.’’

In the fifth round, the Bruins took Milton Academy’s Robby O’Gara. The 6-3, 195-pound defenseman had two goals and seven assists this past season. The 17-year-old has committed to Yale for 2012.

The Bruins finished their day by selecting 6-3, 198-pound goalie Lars Volden. The 18-year-old native of Oslo played for Espoo in the Finnish Elite League last year.

“Typical butterfly-style goalie you see come out of Finland,’’ Benning said. “He’s big. He covers the upper part of the net.

“We’ll keep monitoring him. It takes goalies a long time to develop. There’s been a lot of good goalies coming out of Finland, so we’re excited to get him.’’