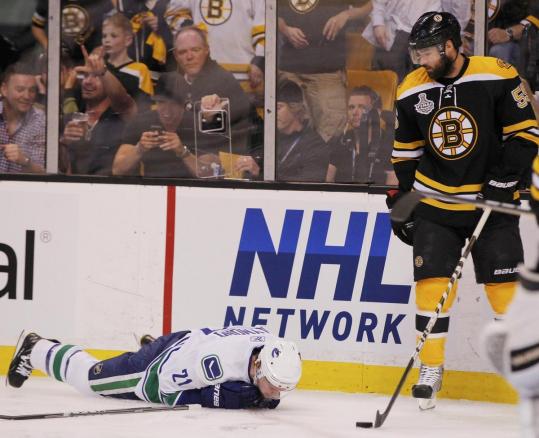 Johnny Boychuk will not be suspended after his early check in Game 6 knocked Mason Raymond out with a back injury. (Adam Hunger/Reuters)
By Amalie Benjamin Globe Staff / June 15, 2011

VANCOUVER, British Columbia — While the Canucks tried to hold their plane as long as possible before making the trip back home for Game 7, at some point they couldn’t wait any longer. So left wing Mason Raymond remained in Boston, with the vertebrae compression fracture he suffered in Game 6 making it impossible for him to join his team for the final game of the season.

He won’t be playing in Game 7. Nor will he be playing for months, as Canucks general manager Mike Gillis said yesterday that the team would be lucky to get Raymond back in November.

“All I can tell you is my observations of the hit,’’ Gillis said. “I didn’t see the puck around him. I thought the Boston player used a can opener and drove him into the boards with enough force to break his back.

“That’s what I saw. I don’t have much more to say about that, other than that observation.’’

He fell face-down on the ice, eventually being helped off by two teammates, looking limp and barely able to shuffle his feet.

This has been a particularly physical series, on both sides, with big hits and controversial moments leading to one major suspension.

Boychuk, though, will not be suspended for the hit, unlike Canucks defenseman Aaron Rome, who was suspended for four games — or the rest of the Stanley Cup Final — after putting a hit on Boston’s Nathan Horton in Game 3 that gave him a serious concussion and knocked him out of the playoffs.

“I’m not in charge of supplementary discipline, so I’m not the right person to ask about that,’’ Gillis said. “I think when you see the severity of that injury, the way our doctors described it to me . . . very, very dangerous.

“I’m always disappointed when you see any player get injured. It wasn’t a chipped vertebrae or a cracked vertebrae; it’s broken through the belly of his vertebrae. So it’s a very serious injury, and you never want to see any player on any team have an injury like that.’’

The Bruins rallied around Horton, who made the trip to Vancouver for Game 7, and it’s possible the Raymond injury could have the same effect on the Canucks.

According to Gillis, there was initially concern about Raymond not being able to walk again, but it appears that the injury is not quite that severe.

There also was some question as to why Raymond was not removed from the ice on a stretcher.

“I think because he began to move his feet and he had feeling,’’ Gillis said. “We wondered about that as well. But our trainers are excellent trainers, so I’m sure they felt there was no risk at that point because of what he was saying and what he was doing on the ice.’’

The Canucks did not have an update on Raymond after they landed yesterday. Gillis said he assumed Raymond remained in the hospital and would be there until today or tomorrow.

The team attempted to wait until Raymond could travel, with the hospital designing a corset for him to wear, but he hadn’t been released by the time the Canucks had to depart.

As for his prognosis, Gillis said, “We’re not sure. We’re hopeful there won’t be surgery at this point. Like I said, it’s a severe injury and we’ll know more over the next week when he gets back here.

“At this point, they’re hopeful that it won’t require surgery, that it has the opportunity to heal on its own. He’s going to face a long, hard recovery. We’ve been told it’s going to be very challenging for him and he’s going to be in a difficult position for some time.

“We’re hopeful we can get him back by November. I think that would be a win for us.’’