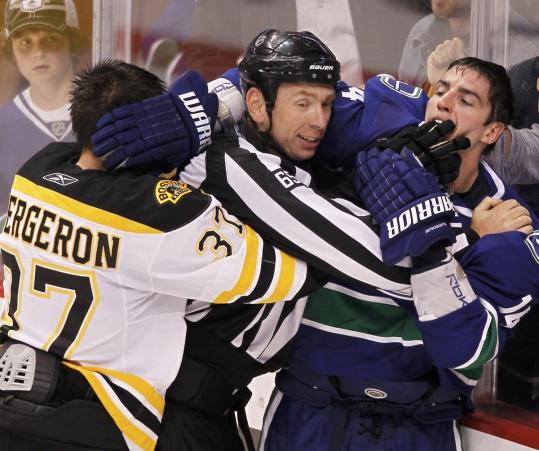 Alex Burrows (right) bit the tip of Patrice Bergeron’s finger during a melee in Game 1 of the Stanley Cup Final in Vancouver, and Bruins fans aren’t likely to forget it any time soon. (Mike Blake/Reuters (Above); Yoon S. Byun/Globe Staff)
By Beth Teitell Globe Staff / June 13, 2011

It wasn’t quite the bite felt around the world — that honor belongs to boxer Mike Tyson.

But news of the finger chomp during Game 1 of the Stanley Cup Final went so mainstream that people who didn’t even know the series was taking place somehow knew that a member of the Bruins had his finger bitten, intentionally or not, by a Vancouver player. The crunch has certainly grabbed the attention of the players — a group accustomed to violence — with the teams taunting each other over the assault throughout the series.

Why, though? What is it about man-bites-man that so fascinates and horrifies?

“It’s as if you shed human civilization,’’ said Helen Fisher, a biological anthropologist at Rutgers University. “When chimps threaten, they open their mouth and show their teeth. It’s a little like waving a knife in front of you. It’s very primitive, and therefore bizarre.’’

Biting is creepy because of its association with cannibalism, said Thomas Connolly, an English professor at Suffolk University. “When you bite someone, you are either a diabolical maniac, or you feel completely powerless, and the only thing you can do is react in the most violent way possible.’’

And yet, he adds, it’s very much in the zeitgeist now — although it’s doubtful that the Canucks’ Alex Burrows was channeling pop culture’s fascination with vampires and zombies when he went after Patrice Bergeron’s finger.

Hannah Holmes, author of “The Well-Dressed Ape,’’ says one reason humans don’t typically bite is out of self-protection. “The face is so flat that to bite an enemy you have to make your eyes really vulnerable. Chimps love to chomp each other’s fingers and toes and entire feet, or genitalia, but their jaws protrude from their faces so their eyes are kept back from the action. Humans really evolved to do our fighting at a distance, with weapons.’’

In other words, what’s wrong with Burrows? Doesn’t he know what hockey sticks are for?

Given the psychological makeup of Boston sports fans, the way Burrows’s bite and subsequent nonsuspension will be characterized will have everything to do with whether the Bruins win or lose. If the Stanley Cup is ours, the chomp will become part of the heroic lore. If we’re robbed of the victory that is so rightfully ours, it will be bitterly remembered, along with the more serious hit in Game 3, which left the Bruins’ Nathan Horton with a severe concussion.

And no matter the outcome, the bite will forever be listed along with the chomp Atlanta’s Tree Rollins took on one of Danny Ainge’s fingers during a 1983 Celtics’ playoff game.

Perhaps no one is better positioned to see the horror a bite causes in the real world — namely the one not associated with hockey or the supernatural — than Dr. Claire McCarthy, a pediatrician at Children’s Hospital Boston.

“I’ve had patients who’ve been threatened that they’ll be kicked out of day care for biting,’’ she said. She’s also seen perpetrators become social pariahs. “It puts a damper on the whole play date thing when your kid bites. The other mommy doesn’t want her child to be around your kid, and the people in the play group keep their kids away.’’

Most juvenile biters are between about 10 months and 2 years old, she said, adding that some parents make the mistake of not immediately correcting the behavior. “When they get older it’s not cute anymore.’’

“I’ve had a couple of parents tell me they bite their kids back to teach a lesson, but I strongly discourage it,’’ she said. “All that teaches the kid is that sometimes it’s OK to bite.’’

Tyson took arguably the world’s most famous bites when he chomped on both of heavyweight champion Evander Holyfield’s ears (removing part of his right ear) in a 1997 match in Las Vegas. The Nevada State Athletic Commission revoked Tyson’s boxing license and fined him $3 million plus court costs.

The teachers at Terri’s Little Pumpkins, a day care in Revere, take a different approach. “We tell them our teeth are for eating, not for biting,’’ said Sabrina Jacobs, director. Some of the kids make excuses — he hit me first — and others try to deny it. “Well, there are teeth marks,’’ the teachers respond, “and they didn’t get there by themselves.’’

Most people grow out of biting, but not all. “We see lots of bites,’’ said Dr. Jonathan Olshaker, chairman of the department of emergency medicine at Boston Medical Center. They’re usually from altercations, he said, but police officers and security guards also get bitten.

The big risk from bites, he explained, is from infection, with research studies showing that between 25 percent and 50 percent of human hand bites getting infected, a condition known as “fight bite.’’

Asked if the bite victim feels different about his injury than a stabbing or punching victim, Olshaker said yes: “People who have been bitten certainly have an element of true surprise.’’

Or do they? When 3-year-old Nicholas Reichman of Natick bites his older sisters, ages 5 and 8, it’s usually after they have tormented him to the point where he doesn’t feel he has a choice, said his displeased mother, Kristin.

After timeouts and verbal admonishments he has figured out that biting is not the way to go, she added. “Now he’s moved on to pinching.’’

Beth Teitell can be reached at teitell@globe.com.