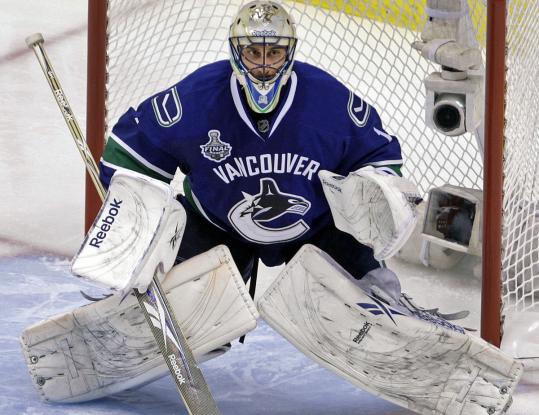 Until this season, Roberto Luongo had never made it out of the second round of the playoffs. After Wednesday’s shutout, he’s three wins from a Cup title. (Jim Davis/Globe Staff)
By Nancy Marrapese-Burrell Globe Staff / June 4, 2011

Luongo’s rookie year was split between the Islanders and their American Hockey League affiliate in Lowell, Mass. When he was dealt to Florida, he assumed a substantial workload (averaging better than 63 games per season), but never made it to the postseason in five seasons.

Although his fortunes turned when he was traded to the Canucks in June 2006, Luongo had never made it out of the second round of the playoffs before this year, despite the team winning the Northwest Division in three of his first four years in Vancouver.

That changed this season, when the Canucks not only had the best record in the division but the best in the NHL. And on Wednesday night, Luongo made 36 saves in the Canucks’ 1-0 victory over the Bruins in Game 1 of the Stanley Cup Final.

Luongo took an interesting route to get here. The Islanders made Luongo the No. 4 overall pick in the 1997 draft, but he became expendable when the Islanders selected goalie Rick DiPietro with the No. 1 overall pick in 2000. Then-general manager Mike Milbury packaged Luongo with Olli Jokinen for Mark Parrish and Oleg Kvasha.

“The reason we traded him was because we kept running into drafts where there were defensemen and goaltenders,’’ said Milbury. “We looked at it and that was the year we took a stab at and got DiPietro.’’

Just because Milbury traded Luongo doesn’t mean he was down on the goalie. In fact, quite the contrary.

“I always thought he was going to be a terrific goaltender,’’ said Milbury. “He was a big horse of a kid. Big legs, big arms, and tall. We gambled on that deal and didn’t fare as well as I would liked to have, but I don’t think there was any question that Luongo was going to be good. He had some bumps along the way, yeah.’’

“I got to face a lot of shots and it really put me in a lot of situations that helped me to where I am today,’’ said Luongo. “Even though I didn’t have much success, those organizations gave me a chance not only to be in the NHL but to become a starter, so I’m very grateful to have that opportunity to play for those teams, as well.’’

“I knew Roberto was going to be really good,’’ said Cronin. “The problem with Roberto at that time was he was so bowlegged, you could drive a truck through his legs. He wasn’t really that athletic.’’

Luongo demonstrated his mental toughness during a development camp in Ann Arbor, Mich., run by Cronin.

“All [the Islanders’] prospects went through a boxing course, learning both the basics of the sport as well as the psychological benefits of learning how to deal with people confronting you and trying to invade your space, because that’s what hockey is,’’ said Cronin.

“The goalie doesn’t have to do that, he’s just trying to stop the puck, but Roberto went in there. He had gear on but he got punched in the face and his nose was bloody and he just kept going. It didn’t faze him. He’s not a tough guy, he’s not an aggressive personality, he’s very calm. But he boxed the way he played. He just went about his business just like he does in the net.’’

Bruins right wing Nathan Horton played two seasons with Luongo on the Panthers. Horton said although it’s difficult for forwards and defensemen to relate with netminders, he learned a lot from Luongo in their time together.

“He was obviously a top goalie in the league back then, too,’’ said Horton. “Just to come in and be able to play with him, he’s a real great guy. He works hard and to see him be one of the best goalies in the league since I’ve been here, it’s nice. I learned about working hard, he works hard in practice and tries hard every time. He competes, just little things like that, pretty much his work ethic.’’

Horton said even though it has been years since they practiced together, he is hoping to exploit his old friend during the Final.

“It’s going to be tough for us to get goals, but hopefully he’s got those tendencies that I remember,’’ said Horton. “He doesn’t have too many weak spots.’’

Luongo, a Montreal native, went from playing in a market where not many cared to a hockey hotbed where he is expected to stop every puck. Even with a gold medal for Canada to his credit in the 2010 Olympics held here, the local fan base has remained supportive but skeptical.

“They expect perfection,’’ said Milbury. “They’re asking sometimes for the impossible, but I think he’s in a pretty good frame of mind right now. And he’s an elite-level goaltender. From the time we projected him to the time we got him, there wasn’t much change for me, he was always going to be among the top goaltenders in the league.’’

Luongo, now 32, said playing in Vancouver is the polar opposite of playing in South Florida.

“There wasn’t a lot of pressure there as far as expectations,’’ he said. “You could walk around the city and nobody pretty much knew who you were. The good thing about here is it’s fun to play in the city when you’re winning. Everybody knows who you are and [they’re] very supportive, especially at this stage of the season when your team has a chance to win the Stanley Cup.’’

If there is a downside, it’s the constant scrutiny. But Luongo said he tunes out most of it, and what he doesn’t tune out he accepts as coming with the territory.

“It’s a hockey market,’’ said Luongo. “Obviously, when things are not going well, sometimes you want to make sure you try to stay away from as much of that stuff as possible. You don’t want to be focusing too much on all the negative stuff around you, but you’ve got to learn to deal with those things. There is good and bad in every place you play. But at the end of the day, it’s so much more fun to win in a city like this.’’

Canucks general manager Mike Gillis signed Luongo to a 12-year, $64 million contract in September 2009, believing he is the goalie of both the present and the future. But a Cup is what the fans want, and anything less will mean more grousing directed Luongo’s way.

When asked if he has silenced his critics, Luongo said, “That’s a good question, I don’t know.’’

But what he feels he has to prove, it isn’t to them.

“I don’t play for my critics, I play for myself, my teammates, and family and friends,’’ said Luongo. “I can’t control what people say. I’ve had success my whole career no matter what level I’ve been at. Obviously, this is the first time I’ve been able to get to a Stanley Cup Final and hopefully do something special, but at the end of the day I play to win a Stanley Cup, and that’s about it.’’