Ready for their shot

For hands-off owner, a chance to win hearts 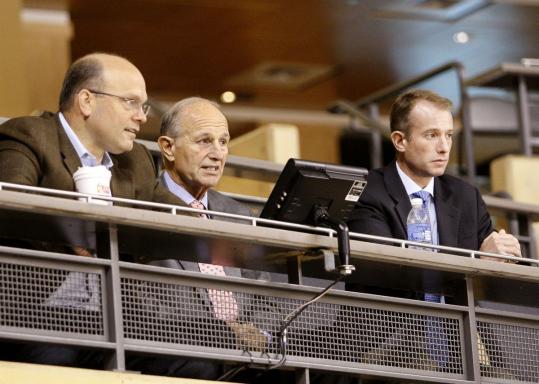 Jeremy Jacobs (center) credits his son Charlie (right) for a role in the changes of the past few years, including the arrival of general manager Peter Chiarelli (left). (Winslow Townson/Associated Press/File 2008)
By Shira Springer Globe Staff / June 1, 2011

Sitting in the shadows of TD Garden, 20 rows from the ice, Jeremy Jacobs watched the Bruins practice over Memorial Day weekend.

The out-of-town owner doesn’t make “appearances,’’ doesn’t crave celebrity, doesn’t see his role as cheerleader-in-chief. He worries his presence will distract from preparations for the Stanley Cup finals, which start tonight in Vancouver, British Columbia.

Of all Boston’s major sports team owners, Jacobs, who purchased the Bruins in 1975 for $10 million, is the least visible and most restrained. Dressed in coat and tie, Jacobs spends playoff games pacing in a luxury box. The distance Jacobs keeps and the fact that his home is in East Aurora, N.Y., near Buffalo, largely account for his image as an aloof owner, someone too far removed from the Boston sports scene to truly value the Bruins’ place in it.

Does he mind that people see him as disengaged? “That’s obviously the image that I portray to them. I can’t change that,’’ said Jacobs. “It’s very much in the eyes of the beholder. I don’t think it would be time well spent to try and get them to change their image. If over time, they come to a different conclusion, that would be nice. People who know me know my level of passion for my sport. Your actions have to speak louder.”

If Jacobs’s new body language includes holding up the Stanley Cup and riding through the streets of Boston in a championship parade, then he has good reason to hope. The prospect of winning the NHL’s ultimate prize gives the much-maligned Bruins owner a rare opportunity to remake his image. The Stanley Cup would quiet longstanding critics who accuse Jacobs of caring more about the bottom line than winning, of viewing the Bruins as just another piece of his business empire, Delaware North Companies, which earns $2 billion in annual revenues from hospitality and food service.

Still, Jacobs seems acutely aware of, even sensitive to, the criticism. He tries to convey the unique place the team holds in his portfolio, though sometimes it sounds like talking points more than passion. For better and worse, he expresses himself best as a businessman.

“When you own a franchise in a city like Boston, these great, classic properties, it’s not another asset,’’ said Jacobs. “It’s a civic asset that you’re holding there. . . . You just don’t treat it the same way you would other property, so to speak. You should go in there with that recognition. I didn’t fully appreciate that until after I’d been there for several years. Then, it became more and more apparent that you were dealing with the emotions of a community and with the pride and the culture, more so than with anything else you would do.’’

In the past, during seasons with a losing team or with questionable trades, those emotions have run from frustration to bitterness to anger. And they have often been directed toward Jacobs.

Under what Jacobs calls his “custodianship’’ of the Bruins, the storied franchise has not won the Stanley Cup. Little more than a decade ago, fans chanted expletives about Jacobs inside the Garden. In recent years, the team weathered fan backlash from the lost year of the lockout in the 2004-05 season and a precipitous decline in its season ticket base. He has been perceived as cheap, though the Bruins have spent at or near the salary cap since its post-lockout creation. (“Being in Boston, being an Original Six team, spending at the cap is pretty necessary in order for your fans to know you’re committed,’’ said Jacobs.)

As the Bruins lost their fans and their way, Boston’s other teams filled the championship void. And their owners — the Patriots’ Robert Kraft, the Celtics’ Wyc Grousbeck, the Red Sox’ John Henry — eagerly embraced their roles as first fan for their respective teams. Jacobs, too, has been a more present and more public owner, though he prefers to operate more in the background.

Jacobs remains most comfortable behind the scenes, making almost daily calls to president Cam Neely and general manager Peter Chiarelli to discuss players, or solicit advice and opinions from his top executives. And sometimes to level a few quick hits with his dry sense of humor. (“He really likes to bust chops,’’ said Neely.)

And Jacobs has been better at expressing his passion to the players, whether being present for a handshake when Patrice Bergeron signed a new contract last fall in Prague, where the Bruins opened their season, or delivering a pep talk before practice last weekend. And Jacobs can call upon his athletic background as a 6-foot-3-inch, 235-pound high school lineman. He married his high school sweetheart, a cheerleader.

“Jeremy wants to win more than anything,’’ said captain Zdeno Chara. “That’s his first priority. I know that for a fact. When I speak to Jeremy, you don’t need to go very far in the conversation before you can see it in his eyes.’’

Jacobs will be the first to describe how his ownership style has “evolved,’’ the first to acknowledge he could have handled relationships with the media better and been more available. But Jacobs came from a different school of ownership, when no one expected owners to be personalities.

“When you’re dealing with a subject that you’re not intimately day to day involved with, put competent people in charge and let them lead,’’ Jacobs’s father, Louis Jacobs, once told his son.

That was a philosophy the elder Jacobs had followed when he owned the minor league hockey team, the Buffalo Bisons, and hired Bruins Hall of Fame defenseman Eddie Shore to manage the team. When son Jeremy took over ownership of the Cincinnati Royals in 1969 after his father died, he brought in Celtics Hall of Famer Bob Cousy to coach the team.

“You turn it over to the guys who have to run it day to day, who have to live with their decisions,’’ said Jacobs. “Nothing upsets me more than leadership, ownership, that starts trying to impose their instant impressions on the long-term interests of the club and the development that needs to be done.’’

That hands-off philosophy is what Jacobs brought to the Bruins. “I bought a team that was extremely well managed by Harry Sinden and I said, ‘Don’t mess with this. It’s working. Own it. Enjoy it.’ I took that role and I let it be led that way. I stayed uninvolved, in some respects probably too long. I probably should have gotten involved in it earlier, but I didn’t do it because it was going well, at least on the surface.’’

Sinden, president of the Bruins for 17 years, was the man Jacobs entrusted with the franchise. In 2006, what Jacobs calls a “watershed’’ year for the team, Jacobs brought in Chiarelli and Sinden moved into his senior adviser role. Coach Claude Julien and Neely arrived the next year. Jacobs said, in part, those changes were prompted by the insights of his son Charlie, who is the team’s principal.

“I see sustainability,’’ said Jacobs. “This community will be hockey-frenzied for the next 15 years, not just now.’’

If Jacobs delivers on that kind of success, fans will forgive, if not forget, where he came from.

How they match up