Ryder again in position to save the day 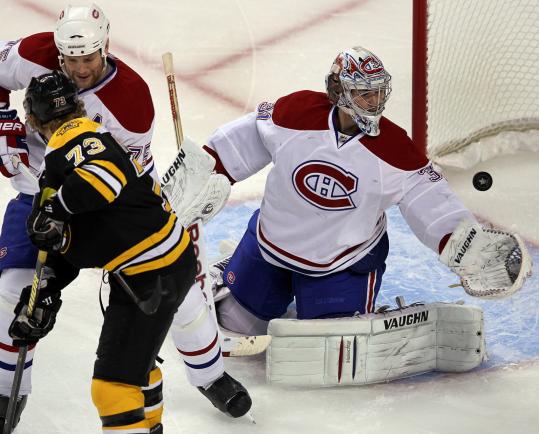 On Thursday, Michael Ryder scored one of the biggest goals of his career. Last night, Ryder followed it up with the best save of his life.

Ryder is a shoot-first winger. He made that clear in Game 4 at the Bell Centre. In overtime, Ryder buried a Chris Kelly feed to give the Bruins a series-tying 5-4 win.

But Ryder was once a ball-hockey goalie in his native Newfoundland and in the first period of Game 5 he put those netminding skills to good use.

Dennis Seidenberg had attempted a D-to-D pass to Zdeno Chara inside the offensive blue line. But Mike Cammalleri read the play, stepped in front of Seidenberg’s pass, and broke the other way. With a series of dekes, Cammalleri pulled Tim Thomas out of his crease. Cammalleri then slipped a backhand dish around Thomas to the stick of an onrushing Tomas Plekanec.

Montreal’s No. 1 center had no idea he’d be staring down a most unorthodox goalie.

As Plekanec aimed top shelf, Ryder flashed out his right hand. With a swipe of his glove, Ryder punched out Plekanec’s shot.

“That was a great save,’’ said Thomas. “He probably knows what it’s like to be one of the old goalies without a mask more than I do.

“On the play, Cammalleri was right there. I didn’t want to give Cammalleri the far side of the net. I was trying to seal him off. Unfortunately, that led to the other thing. But I just had to rely on my defense to cover. I didn’t expect Michael Ryder to be right there.’’

During the third period, Max Pacioretty (@MaxPacioretty67) tapped out a tweet he would soon regret.

Via Twitter, Pacioretty cracked that the game was longer than Brad Marchand’s nose. Later in the third, Marchand scored the game’s first goal. Pacioretty then deleted the tweet.

“I scored quickly after,’’ Marchand noted. “But it’s always nice to just kind of rub it in a little.’’

Pacioretty, on the receiving end of some foul-mouthed tweets from Bruins fans, promptly apologized for the tweet.

“I was trying to be funny and it didn’t work,’’ Pacioretty wrote. “I apologize to Marchand and won’t try to be funny that way in the future.’’

Marchand had five shots in 24:20 of ice time. Marchand also got into a gloves-off scrap with Plekanec in the second. Both were called for roughing.

Entering last night, Milan Lucic was trailing a 0-0—0 line alongside his name.

Over three previous postseasons, the left wing nearly always elevated his game. As a rookie, Lucic buried two goals in the seven-game, first-round showdown against the Canadiens. In 2009, Lucic was nearly a point-per-game player while skating alongside Marc Savard and Phil Kessel. In 10 games against Montreal and Carolina, Lucic scored three goals and had six assists.

“I’m not happy with the way I’ve been playing,’’ Lucic said before Game 5. “Obviously I know I can bring a lot more.

“For now, the main focus for myself is that I’ve got to stop thinking negatively and thinking about what I’ve been doing wrong, and start focusing on what I know I can do right. Try to bring that element to the game.’’

Lucic picked the right time to find another gear to his game.

Lucic landed a game-high eight shots. While none of them slipped past Carey Price, Lucic assisted on the winning goal. Lucic drew a crowd inside the blue line, then dished the puck to Andrew Ference. Because the Canadiens had swarmed toward Lucic, Ference had a wide-open shooting lane that ultimately resulted in Nathan Horton’s winner.

“We didn’t get frustrated,’’ said Lucic. “It was almost like when we had the opportunity in overtime, we wanted to do whatever we could to step up and contribute to the team. It’s obviously great that we were able to create that goal. You definitely don’t want to be satisfied. You want to keep pushing for more and contributing.’’

Zdeno Chara is one of the three finalists for the Norris Trophy as the league’s best all-around defenseman, according to a source close to the Boston captain. The NHL will formally announce the finalists tomorrow.

Chara won the Norris for the first time in 2008-09, the same year Thomas took home the Vezina Trophy.

Last night, Chara logged 37:06 of ice time, second on the team behind Seidenberg (38:15). Chara had four shots and five hits.

Still misfiring Through five games, the Bruins are the only team without a postseason power-play goal. They are 0 for 15. They went 0 for 3 last night, including in overtime after Brent Sopel hauled down Patrice Bergeron. Bergeron would have had a clean look at the goal had Sopel not tripped him. “I was all alone,’’ Bergeron said. “I was on a breakaway.’’ . . . P.K. Subban led all players with 40:38 of ice time. Montreal center Ryan White had the lightest workload (8:37) . . . Tomas Kaberle and Kelly were the only Bruins not to record a shot . . . Bergeron won 23 of 35 faceoffs . . . Tyler Seguin was a healthy scratch for the fifth straight game.