First postseason could grow on Horton 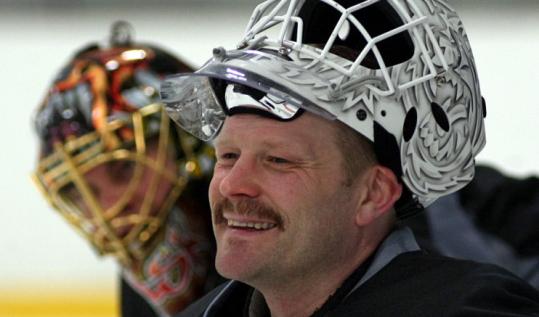 WILMINGTON — Nathan Horton never has had to grow a playoff beard. Horton has appeared in 502 NHL games, none in the postseason.

Now, as he prepares for his postseason initiation, Horton bears a shadow of scruff he hopes will explode into a full beard.

Asked if his down-the-stretch sprint with the Bruins was his version of playoff hockey, Horton said, “It’s different, but I’ve tried to think like that and be a different player. You’re not always going to touch the puck, but you’ve got to do something to help your team.’’

Horton’s body of work during the regular season proved he’s a capable No. 1 right wing on a team that went without one last year. Horton scored 26 goals, second on the team behind linemate Milan Lucic (30).

Horton went through long stretches in December and January when he showed only flickers of a heartbeat. But he closed the season with 7 points (all assists) in the last 10 games, a respectable output.

Perhaps the most encouraging characteristic of Horton’s game has been his sandpaper. This season, he fought seven times, once more than he had in six seasons in Florida. He fought Toronto’s Dion Phaneuf twice. He KO’d Edmonton’s Theo Peckham with a right. In Game No. 81, he engaged Ottawa’s Zack Smith in a haymaker-heavy scrap in front of the Boston bench.

The fights indicate that Horton, like many of his teammates, was most effective when he was emotionally engaged.

There most likely will be no fights in the playoffs. But the Bruins will need Horton to play his heavy, rugged game — the one that mirrors Lucic’s booming approach and meshes with David Krejci’s slick playmaking.

The question is how Horton will adjust to the playoffs. Horton, Brad Marchand, and Gregory Campbell never have dressed for the postseason.

“You have to have that confidence in them that you’re going to get the same player,’’ said coach Claude Julien. “I can use the example of Lucic. When he first came to us, he had no NHL playoff experience. He turned out to be a pretty good player in that seven-game series against Montreal that year.

“The expectations of the player shouldn’t change if you’re happy with the way he’s played.’’

Chara is ready Zdeno Chara has spoken recently with Max Pacioretty, the Canadien he injured March 8, although the Bruins captain didn’t disclose the nature of the conversation.

Chara has been informed that he will not be subject to questioning by Montreal authorities once he crosses the border before Game 3. So consider the captain ready to kick off the first round.

In the six regular-season meetings with Montreal, Chara had one goal and four assists. He was tagged with 29 penalty minutes, 25 from two incidents involving Pacioretty. Chara received a 10-minute misconduct Jan. 8 for a scuffle following Pacioretty’s overtime winner. On March 8, Chara was tagged with a five-minute interference major and a game misconduct after driving Pacioretty into one of the Bell Centre stanchions.

Chara shrugged off any concerns about the leather-lunged treatment he’ll get in Montreal.

“It’s been like that for years,’’ Chara said. “It’s not going to be any different. We all have to just focus on the game.’’

Staying at 9 The NHL draft lottery took place last night, and the Bruins did not move up. They will pick ninth, courtesy of the Phil Kessel trade with Toronto. The Bruins had a 2.7 percent chance of selecting as high as fifth. The draft will take place June 24 in Minnesota. The Devils won the lottery, but teams can’t move up more than four spots, leaving Edmonton with the first overall pick and New Jersey with the fourth pick. Colorado will choose second, Florida third, the Islanders fifth and the Senators sixth . . . The Bruins will practice in Lake Placid, N.Y., next Tuesday and Wednesday, between games in Montreal. They had considered returning to Boston or staying in Montreal for the two off days. Practices will be closed to the public.

Still dangerous The Canadiens will be without Andrei Markov and Josh Gorges for the series. They were top-four defensemen before their knee injuries. Montreal also will be missing Pacioretty (fractured vertebra, concussion), who is not likely to be cleared to play . . . Tyler Seguin was the fourth forward on the third line alongside Chris Kelly, Rich Peverley, and Michael Ryder. Peverley took most of the shifts at center, while Kelly skated on the left side. Peverley had been on the left side for most of his time in Boston. He centered the No. 3 line for the final two regular-season games.