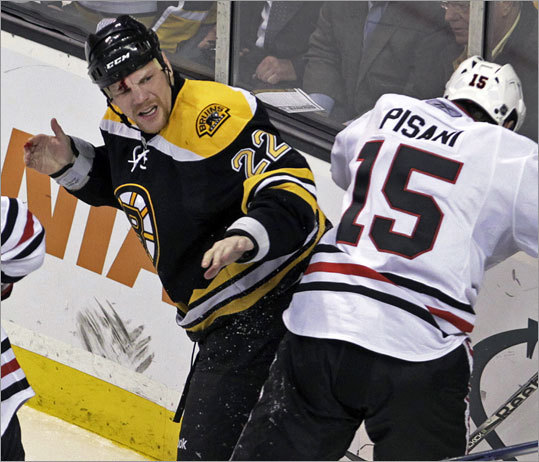 By definition, Shawn Thornton is a tough guy. But even enforcers who get their faces ripped apart by steel aren’t tough enough to return to play.

At 3:31 of the second period, Thornton was cut by Fernando Pisani’s skate blade. Thornton was trying to finish his check when he lost his balance and fell. The blade carved open a J-shaped wound above Thornton’s right eye. Had it been an inch lower, Thornton might have lost his eye. Thornton required 40-plus stitches to close the gash. Thornton didn’t return.

“Lucky,’’ Thornton said. “A little lower and it could have been on my eye. No headache, no concussion, no nothing. It’s throbbing a little bit from getting a lot of stitches in there. But nothing bad.’’

Thornton wasn’t pleased about an unidentified Blackhawk chirping. As Thornton made his way to the dressing room, he heard one of the Blackhawks give him the business from the bench. Thornton stopped and made it known he didn’t appreciate it.

“There was some stuff said that I’m not very happy about,’’ Thornton said. “If I ever find out who it was, I’ll deal with it in my own way.’’

“He was [upset] too,’’ Thornton said. “But he didn’t know who it was either. He actually yelled at their bench. I appreciate it. There’s guys on our team that chirp a lot. But I don’t know if it’s right when somebody’s face is halfway across the other side of his face. But it’s a tough game. People have to live with their actions.’’

Thornton will most likely have to wear a visor or a cage when he plays. Thornton’s fighting days are over until the wound heals, which might not take place before the conclusion of the regular season.

Defensive-minded The Bruins have allowed only three goals in their last five games. It is likely no coincidence that Andrew Ference dressed in each of them.

On Feb. 26, in the first period of a 3-1 win over Vancouver, fourth-line Canucks forward Victor Oreskovich barreled into Ference. Oreskovich’s knee-on-knee knock landed Ference on the sideline for nine games. During that stretch, the Bruins went 4-2-3 and allowed 24 goals.

Upon Ference’s return, the Bruins have been far stouter in front of goaltenders Tim Thomas and Tuukka Rask. Thomas recorded his ninth shutout of the season last night, blanking the Blackhawks, 3-0.

“You’re adding an experienced defenseman into your lineup, a guy who’s had a real decent season this year,’’ said coach Claude Julien.

Ference returned March 19. Save for a first-game mulligan against Toronto — Ference was on the ice for three goals in a 5-2 loss — the depth defenseman has been his usual steady presence. Ference has been skating with Adam McQuaid on the third pairing.

Trying to stay sharp With the Bruins having clinched a playoff spot with a 2-1 win over Philadelphia Sunday, they will rotate players in and out of the lineup to keep everybody sharp. That will start in goal, where Thomas will be the No. 1 netminder in the playoffs. Thomas will see some action down the stretch, but Rask will also get some reps to stay on top of his game and give his teammate rest.

Last night, Michael Ryder, Steven Kampfer, and Shane Hnidy were healthy scratches. They will be back in the lineup, however.

Perhaps most significant among the group is Ryder. The wing was one of the team’s better players in last year’s first round against Buffalo. He had two goals and one assist, skated well, and played a heavy game. The Bruins will need a similar effort from Ryder this year.

Button hooks on Ryan Button, the Bruins’ third-round pick in 2009, signed an amateur tryout agreement with Providence. The 20-year-old split 2010-11 between Prince Albert and Seattle of the WHL. In 69 total games, Button had five goals and 30 assists. The 6-foot-1-inch, 190-pound Button is a puck-moving defenseman. Button assumed a leadership role in last year’s development camp. Button could return to the WHL next season as an over-age player. But Button will most likely start 2011-12 in Providence . . . Dorchester native Jimmy Hayes signed an amateur tryout agreement yesterday with Rockford, Chicago’s AHL affiliate. Hayes recently concluded his junior season at Boston College. He was originally picked in the second round of the 2008 draft by Toronto. But the Leafs traded Hayes’s rights to Chicago for a 2010 second-round pick. Kevin Hayes, Jimmy’s younger brother, is also property of the Blackhawks (drafted 24th overall in 2010). The younger Hayes completed his freshman year at BC . . . Patrice Bergeron had a game-high seven shots . . . The Bruins didn’t have a single power play.