No longer a mullet-haired rookie, Bruins forward Mark Recchi opens up about being the NHL’s oldest active player.

Do opposing players respect your age or joke about it?

Most of them respect it. You get the odd guy who’s an idiot. He says, “Are you collecting your pension already?” I’m still better than them at this age, so it doesn’t matter. The ones yapping at me – they won’t be playing at my age.

Ever expect to play this long?

It must be interesting with three teammates born in 1988, the year you were drafted, and one in 1992.

My two linemates are right around my age ... together.

What advice do you give younger players?

I tell them it goes quick.

Looking back to the ’80s, do you have any early-career fashion or hairstyle regrets?

It was just terrible. I’ve conveniently forgotten them.

What, if anything, makes you feel old?

The music we listen to before games. It’s loud, and it’s like “Oh, my God.” I just don’t come in the locker room when it’s playing.

Any special plans to celebrate your 43d birthday this week?

Well, we play. I’ll probably enjoy a glass of red wine after the game.

Always a wine drinker, not beer?

I used to, but I’d rather have wine. My taste is pretty good right now. I like the nicer stuff.

You planned to retire after last season, but returned. What brought you back?

I still felt good. Last season didn’t kill me. I knew I was going to be able to train in the summer and get ready for this year. Plus, I wanted one more shot at winning here.

Will this be your last season?

I’m not sure. I’ll know soon after the season. It’s about how my body’s doing and whether mentally I can get myself jump-started to prepare for another season. If I can’t put the effort in, then it’s going to be time. 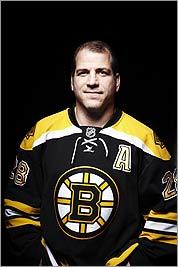 (Photographs by Josh Campbell)
Read more from this issue.
Wintertime Survival Guide
Your comment is subject to the rules of our Posting Policy
This comment may appear on your public profile. Public Profile FAQ