Chara has grown into the job

Hockey is a challenge when you’re 6-9 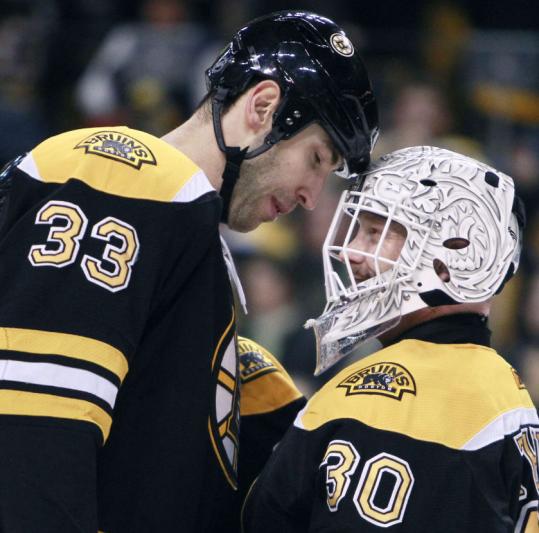 As part of his All-Star Game responsibilities, Zdeno Chara will once again connect blade with puck tomorrow at the RBC Center in Raleigh, N.C., attempting to win his fourth straight hardest-shot competition. Two years ago at the Bell Centre in Montreal, Chara set an NHL record with a 105.4-mile-per-hour burner.

Sounds so easy, right? The NHL’s tallest and perhaps strongest man ever will grip and rip another triple-digit sizzler that is more suited to a racetrack than a hockey rink.

Not really. Chara’s shot, like the rest of his game, doesn’t come naturally.

There may be other All-Stars this weekend whose skills come more easily. Mike Green can pick his way around a rink as if he’s on a slalom course. Ex-Bruin Phil Kessel snaps off top-shelf shots before goalies can blink. There are few who can hammer off-wing one-timers like Steven Stamkos.

In comparison, the Bruins captain has had to transform his 6-foot-9-inch, 255-pound frame from a significant liability into his greatest asset.

“For some guys, it’s a talent,’’ Chara said. “They just grab a stick and they really have that talent to put the puck where they want. For me, as a big guy, to be able to handle a stiff, long, and heavier stick, you really have to work on it.’’

Chara had catapulted nearly 2,000 pucks on NHL nets before three of them went in during one game Jan. 17 at TD Garden. During a 7-0 rout of the Carolina Hurricanes, Chara recorded his first career hat trick. He celebrated by pretending to remove a cap from his head and send it flying like a Frisbee onto the ice.

Chara started his scoring on a two-on-one rush with Mark Recchi, thinking pass all the way before a shooting lane emerged and he snapped a wrister past goalie Cam Ward.

On his second goal, during a two-man advantage, Chara and Recchi executed a scissor play while David Krejci held the puck on the left side. Recchi, usually the low man, sliced into the high slot. At the same time, Chara broke for the far post. When Carolina’s penalty-killing box shifted toward Recchi, it opened a passing lane for Krejci to Chara, who banged home the feed.

Chara completed the trick with a third-period power-play goal. It was the perfect shot — low and hard, out of relief goalie Justin Peters’s reach and at a level where teammates’ sticks could tip it into the net.

It was a shot that has taken Chara his entire career to develop. When he was younger, Chara didn’t always have a 100-m.p.h. blast. Like a pitcher in baseball, Chara needs all his mechanics clicking to get things just right. His slap shot demands that the components — balance, a full windup, spotting the ideal destination, striking the puck dead-on — work in synch.

“It’s a lot of mechanics. It’s a lot of practice,’’ Chara said. “It’s such a big part of the game right now to use your shot as one of the dominant parts of your game.

“It’s something that I felt put me on the power play. I was used more in front of the net. Sometimes on the blue line. Once I got that really heavy, hard shot, it was starting to become really threatening for other teams. Then I was used more and more on power plays.’’

Getting the stick right Chara’s shot hasn’t always been as reliable as it was in 2008-09, his Norris Trophy-winning year. That season, Chara buried a career-best 19 goals.

Last year, Chara scored only seven goals, his fewest since 2000-01, when he netted just two for the Islanders. This year, in November and December, Chara went 23 straight games without a goal.

When his mechanics are off and his confidence wanes, his slap shot is as unpredictable as the stock market. He doesn’t have enough time to wind up and tee off. It misses the net. It sails wide right. Or his stick snaps.

During his November-December slump, Chara busted more sticks than usual. Lately, Chara has experimented with a different blade that complements the shaft’s stiffness.

“You see him going on the ice early to work on his shot,’’ said Bruins coach Claude Julien. “He works a lot on it.

“One thing he’s been working on is getting the right sticks. He’s one of those guys that breaks so many sticks. He’s got the stiffest flex you could ever find. He’s been experimenting with that to control his shot better.

“It’s been a while since he’s had a real comfortable stick. He’s got different sticks and different lies and curves. It’s a low shot, but a real hard shot. The way he shoots the puck, you want your teammates to feel comfortable standing in front.’’

His shot isn’t the only part of his game that has required constant care. Go back 15 years ago, and you’ll find a player that his current teammates might not even recognize.

A star’s development Chara was drafted by the Islanders in 1996 (56th overall) and landed in Prince George (British Columbia) of the Western Hockey League. Opponents viewed him more as a 6-9 sideshow — albeit a scary one — than a future Norris winner.

“He was a monster,’’ recalled Andrew Ference, then playing for the WHL’s Portland Winter Hawks. “He was killing guys in fights. But he couldn’t skate worth [expletive]. You knew the potential was there. But it wasn’t a pretty sight to watch.’’

Like most big men, the 19-year-old Chara had yet to grow into his body. He had sprouted to his 6-9 height, but his weight, approximately 230 pounds then, had yet to catch up. Chara was like a giraffe on skates, unable to keep up with the smaller and quicker forwards who used their speed to elude the monstrous defenseman.

Each year, as Chara added 5-7 pounds, he worked on his skating until it reached an acceptable level.

That happened in Ottawa, where then-general manager Marshall Johnston assembled a team around high-speed, high-skill play. Chara, traded from the Islanders on June 23, 2001, with Bill Muckalt and a first-rounder that would become Jason Spezza for Alexei Yashin — try to stifle the chuckles — was informed he’d be a two-way player instead of a defensive defenseman.

Chara also needed to acclimate to bigger workloads. In his final year on Long Island, Chara averaged 22:20 of ice time. By 2005-06, his final year in Ottawa, Chara’s ice time had climbed to 27:11. This season, Chara is on the ice for 26:08 per outing, third among all players, behind fellow All-Stars Dan Boyle and Duncan Keith.

“He did that fairly early in his career. He’s been a very, very good player for a long time now.’’

This is your captain In 2011-12, Chara will be in the first season of a seven-year deal that may not be his last contract. The 33-year-old has evolved from a roughhouse defenseman into a two-way threat who relies more on his positioning and 65-inch stick than his brawn. By doing so, Chara is reducing the battering of a bump-first game and extending his career.

When he was strictly a shutdown defenseman for the Islanders, scouts may not have projected him to become one of the league’s sharpest all-around blue liners. Chara, however, always believed he could be among the league’s elite.

“I wanted to be better than the player I was on Long Island,’’ he said. “Even now, I still want to improve and get better.

“I think that was the biggest thing for me. I was always pushing myself to be better. I think any time you start to think, ‘I don’t need to get better,’ that’s the biggest mistake. You always want to be improving in different areas.’’

One of the most significant alterations of his game has come off the ice — in the dressing rooms, airplanes, hotels, and buses — where he has emerged as a captain. In 2006-07, the first year he wore the “C’’ in Boston, the position was a clumsy one. Chara tried too hard to be what he wasn’t — a rah-rah, let’s-go-boys cheerleader. Four years later, the captaincy fits Chara far better.

Like every other part of his game, becoming a better captain required work to the point where it seems easy now. What has been a laborious effort now looks natural.

“Personality-wise and captain-wise, he’s definitely changed a lot,’’ Ference said. “He’s relaxed a lot more. He’s not tried so hard to be a captain. It’s come more naturally now to lead by being yourself rather than trying to be a captain.’’