Savard leaves a hole at center

Bruins somehow must fill the gap 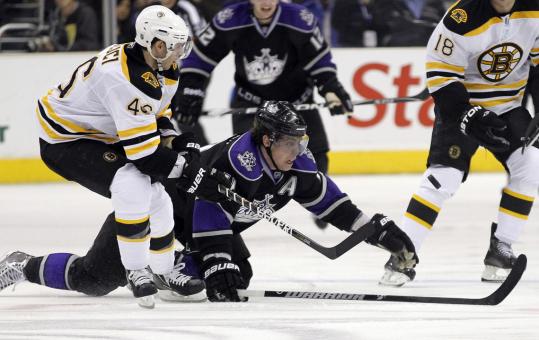 The Bruins need center David Krejci to play better than he did in Monday’s loss at Los Angeles. (Associated Press)
By Fluto Shinzawa Globe Staff / January 26, 2011

So what now for Marc Savard?

Trouble is, nobody — not the doctors, not the Bruins, not even Savard himself — can project when the concussed center can return to action. On Monday, after seeing doctors in Boston, Savard was diagnosed with a moderate concussion.

It’s anyone guess as to whether Savard misses weeks, months, or perhaps the rest of the season. It will be up to the front office to come up with solutions to address Savard’s absence.

If there’s any solace, it’s that the Bruins went through 23 games in October and November without their ace playmaker and remained among the top eight teams in the Eastern Conference.

If Savard is out short-term, the Bruins could make do with their current roster, which features 12 healthy forwards. If they believe they have enough up-front skill, they could recall grinding two-way rookie Jordan Caron, who made the team out of training camp when Savard was unavailable.

They also could tap second-year pro Jamie Arniel (Providence’s leading scorer), who didn’t look out of place in a fourth-line energy role when he was recalled for one game this season.

In Monday’s 2-0 loss to the Kings in Los Angeles, coach Claude Julien went with David Krejci, Patrice Bergeron, Tyler Seguin, and Gregory Campbell as his four centers. If management and the coaching staff want to shift Seguin back to wing, that could mean a promotion for Zach Hamill or Joe Colborne, who could serve as skilled centers.

The Bruins once projected Hamill, the No. 7 pick of the 2007 draft, as a shifty and clever NHL playmaker. However, his development has been slower than expected. Hamill has been performing better lately.

Colborne, a first-year pro, is Providence’s third-leading scorer (11-13—24). He is bigger and stronger than Hamill, but the former University of Denver collegian might be better served spending a full season in the AHL.

If Savard is out long-term, the Bruins could place him on long-term injured reserve, where he started 2010-11. He would have to miss at least 10 games and 24 calendar days, but by slotting Savard there, the Bruins could exceed the salary cap by his $4.007 million annual hit. That would free up money for the Bruins to pursue some assistance on the trade market.

But the Bruins wouldn’t necessarily shop for a center if they placed Savard on long-term injured reserve. Like most clubs, they’re sniffing around for a puck-moving defenseman. They could also use some up-front jam to work the dirty areas.

Or the Bruins could hold their ground and lean on their current group. Bergeron, who has eight goals and seven assists in his last 11 games, has been humming along and developing chemistry with Brad Marchand and Mark Recchi. Seguin continues in his quest to become more comfortable and translate his offensive flammability from the junior ranks to the NHL.

“I hate to put the onus on one player,’’ said Julien when asked whether Seguin could pick up the pace. “I think it’s more the team that has to step up and do the job in his absence.

“I thought David Krejci really played a good game [in Colorado Saturday]. If he continues to play that way, that helps.

“Can Seggy help? Absolutely. He’s a great skater. He’s a playmaker. When he has space on the ice, he usually makes good plays. So he can help as well.

“Overall, I don’t want to lean on one guy. I think we need to lean on the whole team.’’

The Bruins didn’t show their coach much Monday, their first game without Savard since his latest concussion. The No. 1 line of Krejci between Milan Lucic and Nathan Horton was busted up in the second period.

Horton (one goal in his last 19 games) has been especially invisible. There were times during Horton’s slump when he put pucks on goal and played with energy. In the last two games, though, Horton has reverted to his listless skating. When he’s had scoring chances, he has shot the puck with zero confidence.

Because he doesn’t kill penalties, Horton has been of little use all around. If the Bruins had spare forwards, the ex-Panther might be due for a healthy scratch.

Horton wasn’t the only culpable forward in Monday’s setback. Julien tried putting Krejci back with Blake Wheeler and Michael Ryder, with little results. Like most teams, the Bruins struggle when multiple forwards bumble through off games.

“We need guys to start scoring, guys that are known for that,’’ Julien said. “We need to stop relying on the same people all the time.’’