Despite adjustment, no power at play 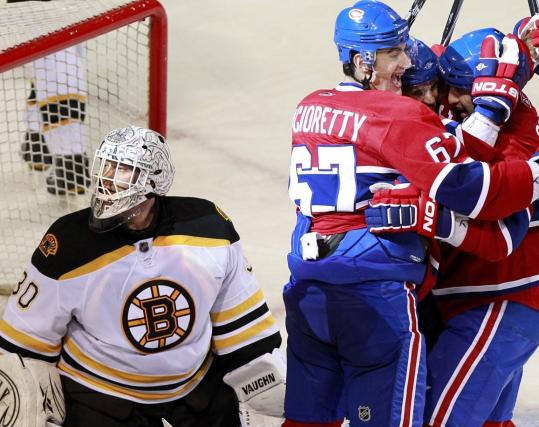 Christinne Muschi/REUTERS
Montreal’s Brian Gionta (right) is mobbed by Max Pacioretty and his mates after tying the game with 48 seconds to play . . . (Christinne Muschi/Reuters)
By Fluto Shinzawa Globe Staff / January 9, 2011

MONTREAL — Usually, when the power play is humming, David Krejci is the quarterback of the No. 2 power-play unit. In theory, Krejci works the half-wall, using his vision and smarts to look for shooting options up top, far post, or in the slot.

But things are going so poorly that Krejci isn’t even on the half-wall anymore.

Last night, with the Bruins entering the game on an 0-for-10 tumble in their last four outings, the coaching staff moved Krejci from his normal position on the second unit. Instead, Tyler Seguin was on the left-side half-wall, while Krejci shifted to the slot.

“I’m not worried about it,’’ Krejci said before last night’s 3-2 overtime loss to the Canadiens. “It just doesn’t go in on the power play. I’m not going to make a big deal of it.

“If it doesn’t go in, at least we have to have a good power play to build momentum and get up for the next shift. If we don’t get a goal, we keep trying. For me, it doesn’t matter if it’s on the power play or five-on-five.’’

It’s a mystery why Krejci (25 points entering last night, third on the team) hasn’t found his touch on the power play. Two years ago, he recorded 19 of his 73 points on the power play. With Marc Savard usually occupying the quarterback position on the first unit, Krejci has usually been on the second unit against the second wave of opposing penalty-killers.

It could be that Krejci’s individual struggles reflect the team’s man-advantage inefficiency. The Bruins have scored on 16.8 percent of their power plays, 18th overall in the league.

“We have good enough skilled players that are capable of scoring some goals,’’ Krejci said. “I think it’s a matter of time before we put the puck in the net again.’’

A Bell rung The last time Brad Marchand was at the Bell Centre, he was on the wrong end of the No. 76 Express. During a 4-3 loss Dec. 16, Montreal defenseman P.K. Subban launched himself and drilled Marchand with what the Boston forward termed one of the hardest hits he’s ever taken.

“He got me pretty good,’’ Marchand said before the game. “But that’s part of the game. Lots of guys take runs at each other. I’ve done it before.

Marchand missed three games last month because of some ill effects from Subban’s blast. Since his return, Marchand has mostly skated in his usual fourth-line spot with Gregory Campbell and Shawn Thornton. But he has also moved up the chart — he skated with Recchi and Patrice Bergeron last night — because of his speed, feistiness, and heavy shot.

“It’s easy to have chemistry with guys as long as you work hard,’’ Marchand said. “Then most guys will connect and work well together. I think the biggest thing is that I work hard on the ice. I’ll just go get pucks and give them to the guys for them to do things with it.’’

Horton sidelined Nathan Horton missed his first game as a Bruin last night because of an undisclosed injury. Horton was hurt in the third period Thursday and didn’t complete practice Friday. Daniel Paille, a healthy scratch in the last two games, was back in the lineup. Coach Claude Julien termed Horton day-to-day . . . Julien moved Michael Ryder up to the first line with Savard and Lucic. The line had little chemistry, as neither Lucic nor Savard recorded a shot . . . Zdeno Chara and Hal Gill tangled after the final buzzer. Both were tagged with 10-minute misconducts . . . After playing right wing for most of the last two games, Bergeron moved back to center between Marchand and Recchi. Seguin, who had been centering Recchi and Bergeron, skated on the right side with Krejci and Blake Wheeler . . . Michael Cammalleri played only 7:23 before leaving in the second because of an undisclosed injury . . . Ex-Bruin Miroslav Satan signed with Dinamo Riga of the KHL yesterday. Satan latched on with the Bruins around this time last year, signing a one-year deal Jan. 3. Satan had 9 goals and 5 assists in 38 regular-season games, then put up a 5-5—10 line in 13 playoff appearances.