Burns succumbs to cancer at 58 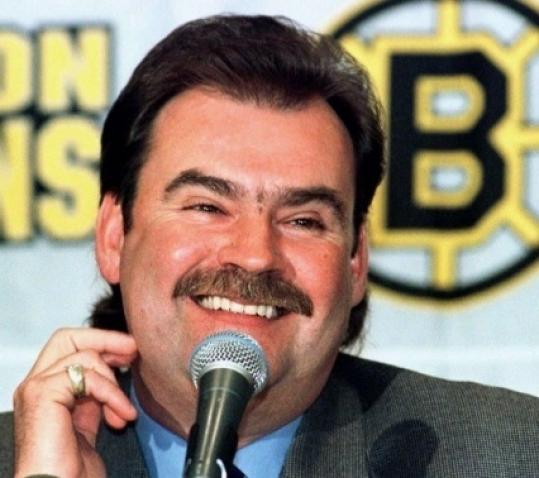 Pat Burns won coach of the year with the Bruins, leading them to the playoffs twice. (1997 File/ Jim Bourg/Reuters)
By Nancy Marrapese-Burrell Globe Staff / November 20, 2010

He was known as the cop-turned-hockey coach, as famous for his no-nonsense demeanor as for his sense of humor.

Most of all he was a fighter, but Pat Burns is fighting no more. Yesterday, he succumbed to cancer at the age of 58. Burns is the only winner of the Jack Adams Trophy as the National Hockey League coach of the year with three teams — Montreal (1989), Toronto (1993), and Boston (1998).

“On behalf of the Jacobs family and the entire Boston Bruins family, I would like to express our deep sorrow on the passing of Pat Burns,’’ Bruins president Cam Neely said in a statement. “Pat was a great coach and more importantly a wonderful man. The Bruins are honored to have him as a part of our history. Our thoughts and prayers go out to the Burns family.’’

Burns, who was an NHL bench boss for parts of 14 seasons, coached the New Jersey Devils to the Stanley Cup in 2003, and, after he retired because of his illness, the Devils kept him on as a consultant.

“On behalf of the ownership, management, staff, and players of the New Jersey Devils, we are all deeply saddened by the loss of Pat Burns,’’ said Lou Lamoriello, the Devils’ president, CEO, and general manager, in a statement. “Pat was a close friend to us all, while dedicating his life to his family and the game of hockey. He has been part of our family here in New Jersey for eight years. Today, the hockey world has lost a great friend and ambassador.’’

He was hired by the Bruins in 1997 after the team finished the previous season with the worst record in the league, which netted them No. 1 overall pick Joe Thornton. Burns, who was an extremely popular personality in Boston, brought Thornton along slowly, limiting his minutes. That first year, Burns led the Bruins to a record of 39-30-13, but they lost in the first round of the postseason. The Bruins won 39 games in 1998-99, too, but were eliminated in the second round of the playoffs. After missing the playoffs in 1999-2000, Burns was brought back for the 2000-01 season, but was fired after eight games when the team struggled during its trip out West.

When it became obvious that Burns’s job was in jeopardy, he maintained his sense of humor. During the long flight home from that fateful October trip, as the plane was about to touch down at Hanscom Field, Burns walked up and down the aisle singing over and over, “I’m leaving on a jet plane, don’t know when I’ll be back again.’’

Burns had expected to be let go at the end of the 1999-2000 season. When the dismal regular season wound down, a fan asked if he could have his photograph taken with the coach. Burns smiled and said, “Why? Are you afraid I’m going to be fired?’’ When the fan said, “Yes,’’ Burns chortled and happily posed for the picture.

Last March, as he continued to fight for his life, Burns traveled to his native Quebec to celebrate the announcement that a rink in his honor — Pat Burns Arena — would be built at Stanstead College. It is scheduled to open next year.

“I probably won’t see the project to the end, but let’s hope I’m looking down on it and see a young Wayne Gretzky or Mario Lemieux [skating on it],’’ he said that day. “I know my life is nearing its end and I accept that. As for my career, I always said to my kids, ‘You don’t cry because it’s over, you’re happy because it happened.’ That’s the main thing. I’m happy it happened.’’

Burns’s last public appearance was in early October at the groundbreaking ceremony.

His comments were directed at those in the media who had erroneously reported on Sept. 17 that he had died. He called Bob McKenzie of Canada’s TSN that day to set the record straight because the report spread on the Internet.

“Here we go again,’’ Burns told McKenzie. “They’re trying to kill me before I’m dead. I come to Quebec to spend some time with my family and they say I’m dead. I’m not dead, far [expletive] from it. They’ve had me dead since June.’’

Sadly, it isn’t erroneous this time, and the hockey world is feeling the loss of the larger-than-life man who was at home in the rink, on a , in a speedboat on a lake, or sipping a glass of port. He was a fine storyteller who regaled those lucky enough to know him with tales of his days as a police officer, as well as his career as a hockey coach.

“Just as they will remember Pat for his success as a coach, hockey fans also will remember his humor, his honesty, his humanity, and his courage,’’ said NHL commissioner Gary Bettman.

In addition to his wife, Line, Burns is survived by daughter Maureen, son Jason, stepdaughter Stephanie, and stepson Maxime.