THIS STORY HAS BEEN FORMATTED FOR EASY PRINTING
Bruins 3, Coyotes 1 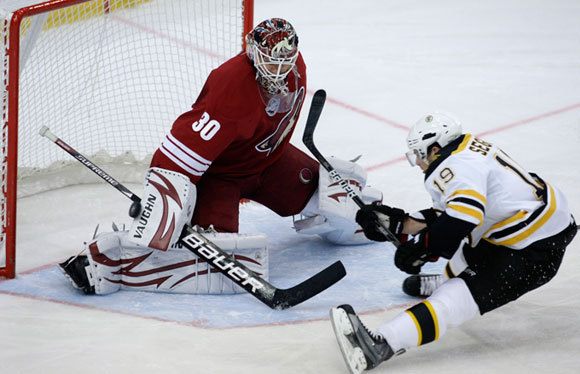 PRAGUE -- Looking far more like themselves and not the lost, bumbling, befuddled tourists who inhabited those Black and Gold sweaters the night before, the Bruins boogied back to Boston last night -- their psyche and self-respect restored -- with a thorough 3-0 win over the Coyotes.

The victory yesterday, before 12,990 at O2 arena, will be featured prominently in their European scrapbook (rather than a scrapped book) for a number of reasons, including:

-- Rookie sensation Tyler Seguin's first career goal. With the clock at 12:13 p.m. back in the Hub, the 18-year-old Seguin took a long Michael Ryder flip feed through the neutral zone, broke over the blue line, and potted a doorstep backhander at the left post for the 3-0 final at 9:14 of the third period. The goalie was the august Ilya Bryzgalov, who gave up the debut goal on his stick side. Mark Recchi fished the puck out of the dislodged net to give the kid his souvenir.

"I don't remember much of what anyone said, to be honest," said Seguin. "But Shawn Thornton [back at the bench] gave me a pretty strong punch in the arm."

-- Tim Thomas, who had off-season hip surgery, posted the shutout with 29 efficient stops. A day after Tuukka Rask looked good, not great, Thomas looked like he is Boston's No. 1 'tender. It's early, yes, but first impressions always count.

"It feels great," said Thomas. "We needed this win today so this trip could be successful and we could go back to Boston with our chins up."

-- And perhaps most of all, the Bruin will remember it for their improved puck management. They chopped the puck to bits in the opener, a humbling 5-2 loss, handing the Coyotes three breakaways (and one goal in the process). In Game 2, they gave up one two-on-one breakaway, handled cleanly by Thomas with an arm deflection.

"Much better," said coach Claude Julien. "Much tighter on our spacing between forwards and defenseman." And later, he added, "It would have been a real disappointment had we left here and not won a game."

It took the greater part of two periods, and a whole lot of rubber heaved on Bryzgalov's doorstep, for the Bruins finally to start to gain some confidence -- and some equity on the scoreboard.

With 12:12 gone, an alert Nathan Horton picked off a pass in the neutral zone as the Coyotes tried to bolt out over their blue line. Horton promptly dished to his left, sending Milan Lucic over the blue line, and Big Looch hammered home a slapper to break the 0-0 deadlock and hand the Bruins their first lead of the season. The shot appeared to tick off the stick of defenseman Sami Lepisto. Rare for the rock-solid Bryzgalov to let in a clear slapper.

With only 33 seconds remaining in the second set, Horton scooped home his third goal in three periods, set up nicely by Recchi, who flashed Michael Jackson-like footwork in the left wing circle. Favorite Czech son David Krejci got it going with pass out from behind the goal line to Recchi in the circle. A couple of moon-walk shuffling steps later, Recchi sent a soft feed into the slot and Horton knocked home the 2-0 lead. Tough goal for the Coyotes, who weren't generating any offense for the first two periods.

"We were hoping to add guys who could score for us on a consistent basis," said Julien. "So far, [Horton] hasn't disappointed."

Prior to puck drop, Julien was concise in his review of Game 1.

"No. 1, we have to clean up our unforced errors," he said. "And we have to be better about the space between our forwards and defensemen. We gave them too much room, and that led to them getting too much speed in the neutral zone."

For the first 20 minutes in Game 2, the Bruins had that spacing tightened, and they kept it tight all night long. The only glaring error came again on a power play -- Boston's only man-advantage in the period, when Lauri Korpikoski and Martin Hanzal bolted down the right side after a breakdown at Boston's left point. Thomas knocked away the Korpikoski attempt, keeping it knotted, 0-0. Less than four minutes gone, big boo-boo No. 1 in the books.

Other than swapping in Thomas for Tuukka Rask, the Game 1 loser (5-2), Julien also brought Jordan Caron into the lineup for the kid to make his NHL debut. Caron skated at left wing on a line with fellow Quebec native Patrice Bergeron in the middle and Blake Wheeler shifted to the right side.

To accommodate the move to Caron, Recchi moved over to left wing on a line with Seguin and Ryder. The other two lines remained the same, with Lucic-Krejci-Horton one trio, and Brad Marchand-Greg Campbell-Thornton on the energy line.

The Bruins were blanked on the power play (0-for-4), using a first unit that had Krejci between Recchi and Michael Ryder, with Matt Hunwick and Zdeno Chara at the points. The No. 2 unit had Bergeron pivoting Seguin and Horton, with Johnny Boychuk and Dennis Seidenberg the top-of-the-circle duo.

It appeared that Andrew Ference, slightly injured (undisclosed) in Game 1, would not dress for the 4 p.m. (local time) start, but the oft-injured blue liner took his regular shift, paired most of the time with Matt Hunwick. With Ference in uniform, Adam McQuaid remained on the sidelines.