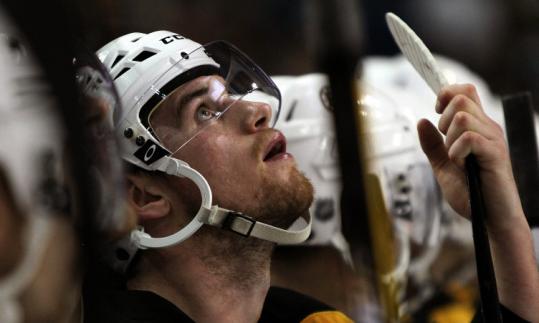 Prior to yesterday’s opening of free agency, the Bruins had been one of the NHL’s busiest clubs.

They re-signed Shawn Thornton to a two-year, $1.625 million extension. They locked up Dennis Seidenberg to a four-year, $13 million deal. They acquired Nathan Horton and Gregory Campbell from Florida for Dennis Wideman, the No. 15 pick in the 2010 draft, and a 2011 third-rounder. They drafted Tyler Seguin with the second overall pick.

So with all that movement, contributing to a salary cap crunch that leaves them with shrinking spare funds to pursue free agents, it was little surprise that their major transaction yesterday was signing Daniel Paille to a two-year, $2.15 million extension ($1.075 million annual cap hit). Early yesterday evening, the Bruins brought back Jeremy Reich on a one-year, two-way contract.

“We went into this period expecting to be quiet,’’ said general manager Peter Chiarelli. “We felt we’ve added to our forward group by adding Nathan Horton. Young Seguin, at some point, will be in our group. Quiet day all in all today.’’

Paille, a fourth-line left wing and penalty-killing specialist, became an unrestricted free agent when the Bruins didn’t give him a qualifying offer by Monday’s deadline. Had the Bruins qualified Paille, the ex-Sabre would have been guaranteed a $1.35 million annual salary. Paille also would have earned arbitration rights. But the Bruins continued to negotiate with Paille and locked him up the first day they were eligible to bring back the 26-year-old.

After Chiarelli traded a 2010 third-round pick to Buffalo for Paille, the former first-round pick scored 10 goals and nine assists in 74 games this past season for the Bruins. Paille averaged 13 minutes, 48 seconds of ice time, including 1:59 on the penalty kill, most of any forward. Paille, paired mostly with Steve Begin, played a go-to role in lifting the PK, which recorded an 86.4 percent success rate (third highest behind St. Louis and Buffalo).

Paille again projects to be the fourth-line left wing in 2010-11, alongside Campbell and Thornton.

“I think Dan has the ability to play up and down the lineup,’’ Chiarelli said. “With him, it’s about confidence. He suffered through a lack of confidence in Buffalo for whatever reason. He saw some really good spurts with us. At the end, when we were thin, maybe we were expecting too much from him. But with his speed, size, and ability to forecheck, if he gets his confidence back, we could see him in a variety of spots. At the very least, he’ll be in that [fourth-line] slot. But I expect more things too of Dan.’’

The 31-year-old Reich played for the Bruins from 2006-08, scoring two goals and three assists while logging 141 penalty minutes in 90 games. On June 2, 2009, Reich signed a one-year contract with the Islanders, where he was reunited with former Providence coach Scott Gordon. But Reich broke his left wrist during the preseason and was never called up to Long Island. Reich spent 2009-10 in Bridgeport, recording a 12-8—20 line with 24 PIMs for New York’s farm club.

The rugged left wing served as Providence captain in 2008-09, nudged out of a big-league spot when Blake Wheeler made the club out of training camp. In Providence, where he expects to be once more in 2010-11, Reich was a valuable mentor for youngsters such as Brad Marchand.

“He’ll add toughness, leadership, and teach our kids in Providence how to show up and work hard every day,’’ assistant GM Jim Benning wrote in an e-mail.

Chiarelli said he talked with several other GMs regarding trades. Marc Savard, Tim Thomas, and Michael Ryder have been available with the intention of clearing cap space. Chiarelli said that once the market shakes out, he will resume trade talks. But with limitations binding the three (Savard has a full no-trade clause, Thomas also has a no-trade clause and is coming off hip surgery, Ryder is coming off an 18-goal season), it will be challenging for any of the players to be moved.

Perhaps yesterday’s most interesting trend was the movement toward younger, inexpensive goalies (Antero Niittymaki to San Jose, Dan Ellis to Tampa Bay, Martin Biron to the Rangers, Alex Auld to Montreal), which reduced interest in the 36-year-old Thomas and his $5 million annual cap hit. Philadelphia, which re-signed Michael Leighton to a two-year, $3.1 million contract Wednesday, could still be in the Thomas market provided the Bruins take back salary. But it’s likely that Thomas will be back in Boston to contend with Tuukka Rask come September.

Chiarelli, who said he’d look to the secondary market for defensive depth and a No. 3 goalie, will remain on the lookout for such assets in the coming days. Chiarelli said he spoke with the agents for Begin and Miroslav Satan. Chiarelli informed them that while they’re currently in a holding pattern, they could revisit talks with both players.

The Bruins now have $55 million committed to their 2010-11 payroll. They must re-sign restricted free agents Campbell, Wheeler, Mark Stuart, and Adam McQuaid. Chiarelli said that while space would be tight, he believes he can get all of the RFAs back in the fold. For that to take place, Ryder would most likely be assigned to Providence, much like Peter Schaefer was two years ago, to wipe his $4 million from the books.

“You’re never happy. You always want to improve,’’ Chiarelli said, when asked if he’d be satisfied if he kept his current roster into camp. “But I really like the fact that we added Nathan Horton. I like the fact that we were able to get a player — and I don’t want to put too much emphasis on Tyler at the beginning — who’s going to be a real good player. We lost some puck-moving from our back end, but I think Johnny Boychuk has come a long way. I think Matt Hunwick is going to turn the corner. Andrew Ference, when he’s healthy, will be good. I think Mark Stuart’s going to have a good year. And we have Dennis Seidenberg. A lot of what we did was preemptive to this day.’’