THIS STORY HAS BEEN FORMATTED FOR EASY PRINTING
Flyers 2, Bruins 1 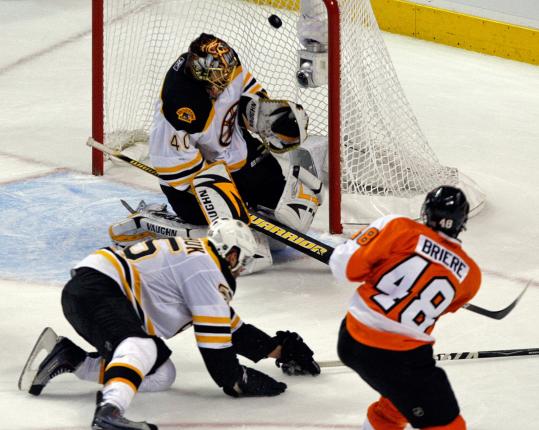 The Flyers’ Danny Briere got one past Johnny Boychuk and Tuukka Rask to give the Flyers a 2-0 lead in the second period. (Barry Chin/Globe Staff)
By Fluto Shinzawa Globe Staff / May 13, 2010

PHILADELPHIA — So quick. So easy.

Sixty seconds before the Flyers could stamp an exclamation mark on their second straight shutout, Milan Lucic, clearing space in front of goalie Michael Leighton, tapped in a close-range, six-on-five goal to put the Bruins on the scoreboard for the first time since last Friday. But by then, the Bruins had wasted 59 minutes of hockey trying to put something, anything, behind a goalie who was making his first NHL playoff start.

“It was nice to get one past him,’’ Lucic said. “He played great, for sure. Then again, I don’t think we generated many scoring chances. Lot of shots. But a lot of them were outside shots. We’ve just got to find a way to create good, quality scoring chances. When we do, we’ve just got to bury them. It’s important that we get a lot of traffic and take away his vision.’’

So we’ve come to this. After a 2-1 loss last night at the Wachovia Center, Boston’s third straight setback to the plucky Flyers, the Bruins return to TD Garden tomorrow facing the breathtaking chance of joining two of the NHL’s most snickered-at punch lines. Only the 1942 Red Wings and the 1975 Penguins have gagged up 3-0 leads.

“We can’t get discouraged going into Game 7 right now,’’ Lucic said. “We’ve just got to do whatever we can to feel confident going into it. Try to gain some of that emotional edge. It’s going to be rocking in the Garden [tomorrow] night. We’ve just got to be looking forward to that.’’

With Tuukka Rask pulled for an extra attacker, the Bruins finally solved Leighton, who had faced some of the softest, most gracious, one-and-done shots a goalie will ever see in the playoffs. Mark Recchi fished the puck out of the right corner and fed Zdeno Chara at the point. Chara, seeing Dennis Wideman open at the left point, promptly sent a pass to his fellow defenseman. Wideman’s one-timer was a wobbler that hit traffic in front. But Lucic, who had gained net-front position, wasted little time gaining control of the puck and whacking it past Leighton at 19:00 to make it a 2-1 game.

But the rest of the night was an exercise in futility trying to get pucks through the Flyers and onto Leighton.

The Bruins landed 31 pucks on Leighton. They shot wide with 18 more. And 30 thudded off the Philly shot-blockers, who gave little regard to physical comfort by stepping in front of every piece of frozen rubber that threatened to come near their goalie.

“They did a great job of fronting our shots,’’ said Bruins coach Claude Julien. “You’ve got to give them credit for doing that.’’

But those Black-and-Gold shots only came after a dud of a first period when they lost just about every puck battle. The Flyers, facing elimination for the third straight game, grabbed a chokehold on the game by dominating the Bruins early. While the Flyers swarmed the Bruins with wave after wave of attacking pressure, the frightened Bruins sat back and allowed their opponents to set the tone.

“I think the first 10 minutes of the game, they really took it to us,’’ Julien said. “But after that, I thought we settled in, played pretty well, and played hard. We didn’t get enough scoring chances in the second, even though we had the puck in their end quite a bit. In the third, we got more scoring chances and hit a few posts. Pucks weren’t going in for us tonight. I’m not going to criticize my players’ effort. I thought we were ready. But somehow, we’ve got to find a way to score goals.’’

The Flyers struck first at 6:58 of the opening period. Mike Richards, who has outclassed every Boston forward throughout the series, started the play by sending a backhand pass into the slot. Dan Carcillo and Simon Gagne took pokes at the puck, only to be thwarted by Rask. But Richards, whose momentum had taken him into the left corner, curled back into the slot while backcheckers Miroslav Satan and Marc Savard floated away from the Philly captain. The relentless Richards hunted down the loose puck and jammed it into the net.

The Flyers doubled their lead in the second during four-on-three play. Philly had a five-on-three power play for 1:26 when Savard (high-sticking) and Daniel Paille (elbowing) were sent to the box in succession, but the two-man advantage was wiped out when Chris Pronger was called for interference.

During four-on-three, Danny Briere skated around Johnny Boychuk, got in close, and flung a wrist shot on goal. The puck caught Rask in the chest and deflected into the net at 16:20.

The Flyers could have taken a 3-0 lead when Vladimir Sobotka dragged down Ville Leino in the third period, giving the forward a penalty shot. But Rask stayed calm, waited for the Finn to make the first move, then foiled his longtime friend by flashing his glove and snaring his backhand bid at 12:39 of the third period.

They have one more opportunity tomorrow to redeem themselves from the stain of the last two losses. But the Bruins have submitted little evidence that they are capable of staving off an all-time choke job.

“Now we’re in the same boat,’’ Lucic said. “Both teams’ backs are against the wall. One game wins all. Everybody has to do their ultimate best. That’s what we expect from our group going in. Hopefully try to build off the ending we had in this game.’’