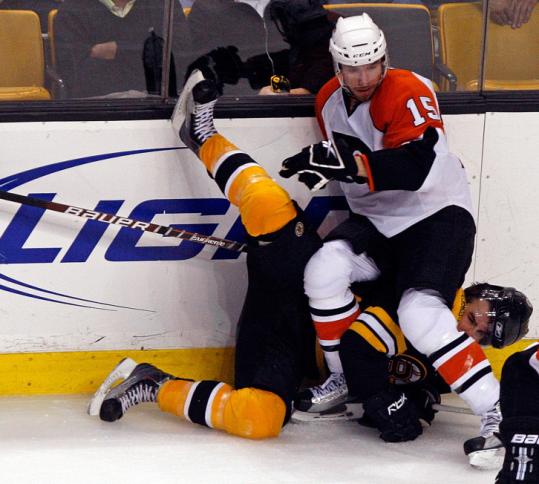 The Flyers’ Andreas Nodl was credited with one hit, and he had the lowdown on Bruin Johnny Boychuk in the third period. (Barry Chin/Globe Staff)
By Dan Shaughnessy Globe Columnist / May 11, 2010

Now what? Ushers handing out bloody socks at the turnstiles at the Wachovia Center? Kevin Millar running up and down Broad Street in a Flyers jersey yelling, “Don’t let us win again, because in a Game 7, anything can happen.’’

The Flyers thrashed the Bruins, 4-0, last night, pushing the Eastern Conference semifinal series to Game 6 tomorrow night in the City of Brotherly Love.

Boston’s once-commanding three-game lead is dust in the wind. Hub Hockey has the dry heaves. Somebody perform the Heimlich.

“They wanted it more than we did,’’ acknowledged veteran winger Mark Recchi. “The bottom line is, we’re not desperate enough. We just weren’t playing well and they deserved it.’’

Oddly, the Flyers and their fans need look no further than Fenway for inspiration.

In more than 240 tries, only three teams in the history of professional sports (hockey, baseball, basketball) have recovered to win a series after losing the first three games.

It’s happened twice in hockey. The 1942 Toronto Maple Leafs came back against the Red Wings, and the 1975 New York Islanders turned the trick against Pittsburgh. No basketball team has done it.

The most famous example of a 3-0 comeback, of course, started at Fenway Park in October 2004. Those gypsies, tramps and thieves of Boston baseball lore forever will serve as divine inspiration for all teams that lost the first three games of a best-of-seven. The Sox miracle vs. the Yankees stands as the only 3-0 comeback anyone can remember and I’m wondering if the Flyers pocketed some magic dust when they visited Fenway on New Year’s Day.

Sad, but true: The 2009-10 Philadelphia Flyers are scaring the daylights out of New England by summoning the ghosts of Messrs. Millar, Schilling, Damon, and Vinatieri, er, Varitek.

You know that Kate Smith will be on the Jumbotron (nice symmetry there) tomorrow night. Bobby Clarke will be grinning and gooning around the rink, and the knuckleheads of Philadelphia will bring all kinds of signage urging the Bruins to choke.

Six days ago the Bruins beat the Flyers in Philly, 4-1, to take a 3-0 series lead. We all figured the Flyers would roll over at home in Game 4. It was inevitable. But the Sons of Dave “The Hammer’’ Schultz did not quit. They won last Friday night, in overtime, after surrendering an excruciating goal in the final seconds of the third period. Simon Gagne’s overtime goal has a chance to be Philadelphia’s answer to the Dave Roberts stolen base.

The Bruins looked tired last night. They are not the same team without David Krejci. And Boston’s gold-plated invitation to the conference finals — the Hub’s first since 1992 — is in jeopardy. The Flyers need only to win at home to bring this thing to a seventh and deciding game Friday night at the Garden.

And you know the old saying: Anything can happen in a seventh game. Just ask Millar.

Monday was a holiday in Boston. It was the 40th anniversary of the Bruins’ Stanley Cup victory on Mother’s Day, 1970, and Bobby Orr returned to Causeway Street for the unveiling of a statue commemorating his iconic goal. You would have thought all that good karma would translate into a victory.

Wrong. The Bruins had no jump and were thoroughly beaten.

“That’s just what happens when you get outworked by the other team,’’ said Milan Lucic.

The Flyers took charge on a goal by Ville Leino less than seven minutes after Rene Rancourt’s anthem (Walk Away Rene also did the honors for the Celtics Sunday).

The Bruins got a break early in the second when Ryan Parent crashed into his goalie and took Brian Boucher out of the game. It was time to say hello to Michael Leighton, who last played March 16.

No matter. Flyers coach Peter Laviolette could have put Blaine “Let ’Em In’’ Lacher between the pipes. Limp Boston had 15 shots in the first two periods. They had no speed in the neutral zone. They were standing around.

The Flyers made it 2-0 on a goal by Scott Hartnell, then went out to a 3-0 lead when Gagne scored with 2:07 left in the second. All the air was sucked out of the hockey barn. Bruins fans booed their team when the horn sounded at the end of two.

It was an official jailbreak when Gagne scored on a breakaway against a plodding, stickless Dennis Wideman at 6:48 of the third.

“I thought we were kind of sloppy,’’ said rookie goalie Tuukka Rask.

Too bad. In the words of Mayor Tom Menino, this could have been another “ionic’’ moment in Boston sports history, right up there with John Hannah hitting a homer in his final at-bat at Fenway, Robert Parish (“The Chief’’) hoisting the Stanley Cup over his head in 1970, and Jim Lonborg hammering a fan with his shoe at Madison Square Garden.

The Bruins still lead the series, 3-2. Too bad it feels like they are playing from behind.