Pressing issue facing them was lack of shots 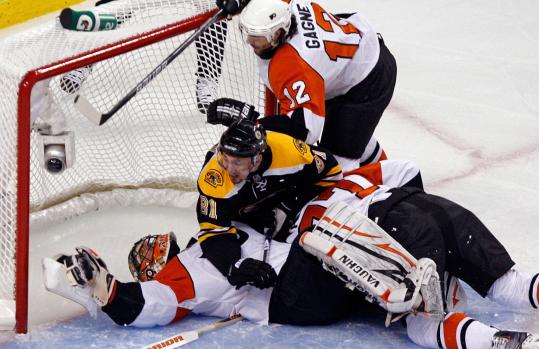 The frustrating part of the Bruins’ 4-0 loss last night against the Flyers?

The Bruins were unable to muster pressure on Flyers backup goaltender Michael Leighton, who was pressed into action after starter Brian Boucher hurt his left leg during a second-period pileup in front of the net. Although Leighton had been idle for 22 games, the Bruins managed just 14 shots against him.

“We definitely would have like to have tested him a lot more,’’ said Bruins coach Claude Julien. “I think it was pretty clear that we wanted to get some shots on him. That didn’t happen. That’s the part of the game we’re talking about. If you’re not winning the battles for the puck, you’re not playing with it. And we didn’t create that many shots.’’

Maybe it was the numerous penalties the Bruins took (some of which stemmed from their offensive frustration), beginning with a high-sticking double-minor against Vladimir Sobotka at 13:43 of the first period that left the Bruins playing on their heels.

“Yeah, I guess they were penalties, so what do you do?’’ said Marc Savard, who was sent off with Milan Lucic (roughing) at 14:34 of the third after Savard was called for high-sticking, retaliating against Flyers captain Mike Richards, who was called for roughing. “A couple calls could have went our way at times, but they didn’t, so unfortunately we took more penalties and that’s not a good way to react.’’

In the end, the Bruins’ frustration — and that of their legion of loyal fans — aided in conspiring against their bid to close out this best-of-seven Eastern Conference semifinal series, which shifts to Philadelphia for Game 6 tomorrow night.

Asked if the frustration began to mount on the team, Lucic said, “Uh, yeah a little bit.’’

“It was tough for us,’’ he said. “A chance there in the first went off my foot and hit the post. Another one, Miro [Satan] put it across the crease and, even in the second, it went through the crease again and just . . . ’’

Hung there? “Yeah, it hung there and didn’t have enough legs on it,’’ Lucic said. “It’s frustrating when things like that happen, but we haven’t shown frustration yet throughout the whole playoffs so far and that’s why we’ve been able to get ourselves out of situations.

“In the Buffalo series, we were down a couple of goals, but we shouldn’t be frustrated. We should just focus on one goal and building off that and that’s what we need to do the next game.’’

When the Bruins departed for their dressing room at the end of the second period, facing a 3-0 deficit, the TD Garden crowd of 17,565, turned its venom on the home team’s performance, booing it off the ice. It only got worse in the third when the game got chippy, then downright ugly, as Simon Gagne, who scored in overtime Friday, scored his second of the night at 6:48.

“These crowds are used to winners, that’s all there is to it,’’ Savard said. “We didn’t put a great effort together. We had spurts, but spurts aren’t going to win you hockey games in the playoffs.’’

Nor is getting outshot, 31-23, and getting shut out by a goalie who had to shake off considerable rust.

“If you’re not getting shots, period, then you’re not executing and you’re not playing the right way and, you know, that’s the frustrating part when you have a chance to close a series,’’ Mark Recchi said. “Now we have to learn from it, forget about it, and we have to bounce back and play with the same desperation that they came in and played with tonight.’’