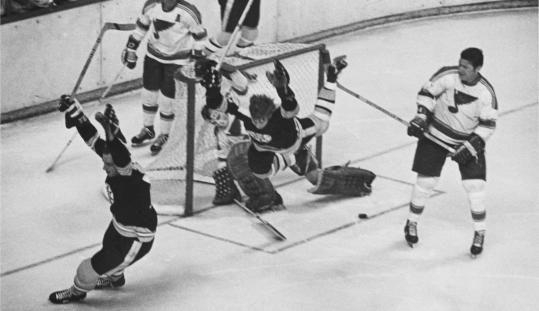 Bobby Orr’s Stanley Cup-winning goal was quite a sight, and the sounds were fantastic, too. (File/Frank O’Brien/Globe Staff)
By Kevin Paul Dupont May 9, 2010

The memory we hold dearest of Bobby Orr, to be celebrated in the unveiling of a statue outside TD Garden tomorrow, has the Bruins defenseman flying through the air after he potted the Stanley Cup-winning goal in 1970.

It was May 10, Mothers Day, with temperatures in the low 90s outside and things steaming hot inside the Garden. Derek Sanderson returned a pass to Orr, the puck went behind Blues goalie Glenn Hall, and defenseman Noel Picard launched the 22-year-old Orr into an orbit that, for our part of the planet, was just as important and glorious as any of those Apollo missions out of Florida.

I took my own flight the other day, for the first time dusting off the Sears Silvertone audio cassette recording I made of that game, sitting that afternoon in my parents’ house with one eye on the TV broadcast from Causeway Street, the other on the volume meter of my trusty, Sears-bought recorder. Lots of Sears shopping in our house in those days. It was about the only big box store we knew, other than Jordan Marsh and Somerville Lumber.

Fred Cusick handled the radio call, with John Peirson his partner. Always a minimum of banter between those two, and it was a joy to hear them work again, especially when it came to the winning goal with 40 seconds gone in overtime.

Moments later, Peirson followed, “The Stanley Cup belongs to Boston for the first time in 29 years.’’

Yes, the interminable wait. Over. How well we know the long time between Cups.

Cusick and Peirson, after a toss down to Guy Mainella at ice level, scurried to the dressing room for postgame interviews with Phil Esposito, Gerry Cheevers, Ken Hodge, et al. At one juncture, Cusick surrendered the microphone to Peirson, eagerly telling his sidekick, “I’ll try to get you some players.’’ Cusick, a play-by-play announcer who truly worked the corners.

“Tom Fitzgerald,’’ said Peirson. “The players, to a man, love you dearly, my friend.’’

Love for the Globe guy. Some of these truths we hold to be self-evident.

Johnny McKenzie spoke for everyone in Bruins Nation, before we even knew we were a nation.

“Maybe we are starting a dynasty here, John,’’ Johnny Pie opined to Peirson. “Maybe we can do this for two, three, four years.’’

The possibilities seemed endless, but just one more Cup, in 1972, had to suffice. The Bruins were never hotter, but neither was pro hockey in North America. Within months after getting his name on that next Cup in ’72, McKenzie was off to the Philadelphia Blazers of the rival World Hockey Association. Sanderson and Cheevers also couldn’t resist the riches and lifelong prosperity that the other league guaranteed. Orr’s knees soon were in rapid decline and he would retire a Chicago Blackhawk. Esposito and Hodge were dealt to the Rangers. The team that captured imaginations and stole hearts broke into bits.

But on Mothers Day 1970, all of that was yet to unfold. The St. Louis Blues were on Garden ice, faced with postseason elimination after losing the first three games, and before the opening faceoff, Cusick and Peirson took a few moments to read signs in the Garden stands. “There’s No Holes in the B’s Cheese,’’ read one, in tribute to Cheevers. “Our Cup Runneth Orr,’’ read another, bringing a laugh on air from the usually stoic Cusick.

With 4:41 gone in the first period, a fight broke out, triggered by an Orr-Picard scrum. Peirson labeled it, “a real donnybrook going on by the St. Louis bench!’’

We don’t see donnybrooks anymore, unless it’s July 1 and general managers are clawing after the same free agents. We also don’t see sweep checks, a patented move by Sanderson, one that Peirson noted the “fine young center’’ used as a pass to set up Rick Smith for a 1-0 lead. Sanderson was also called for butt ending, a minor penalty gone the way of leather skate boots.

Amid the protracted delay around the donnybrook, which brought cops funneling to rinkside, the ever-calculating Bowman drew Cusick’s ire.

“Scotty Bowman is going to have a debate instead of playing hockey, apparently,’’ snorted Cusick. “Boy, he is going to delay this to midnight, I guess.’’

When the key moment came — the moment that will be immortalized tomorrow when Orr’s statue is parked at the edge of where the original Garden once stood — there was no mention of Orr flying through the air, or the Picard pitchfork that sent him sailing. That moment in time was captured best not by word, but by the lens of Record American photographer Ray Lussier, his shot still tacked on barroom walls in all the hockey-loving corners of North America.

By early evening, May 10, 1970, streets in and around Boston were back to normal, with cars constantly interrupting the steady traffic of street hockey games. We were a hockey town then, loving it, living it, playing it, savoring it, even preserving it in scrapbooks or on Sears’s “best’’ cassette tapes.

Kevin Paul Dupont’s “On Second Thought’’ appears on Page 2 of the Sunday Globe Sports section. He can be reached at dupont@globe.com. 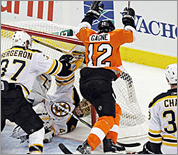