THIS STORY HAS BEEN FORMATTED FOR EASY PRINTING
Bruins 5, Flyers 4 (OT) 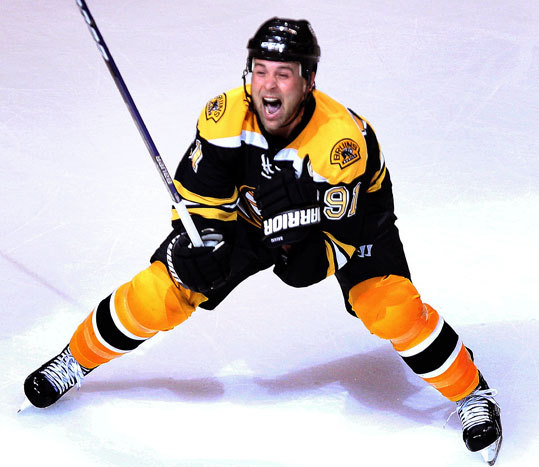 Marc Savard wrote the final pages of a fast-paced adventure story in the first game of the Eastern Conference semifinals today, scoring at 13:52 of overtime to lift the Bruins over the Flyers, 5-4, at TD Garden.

It was a mystery story and an adventure story, with an ending straight out of Hollywood, as Savard, returning to the ice after missing the last 18 regular-season games and the first round of the playoffs with a concussion, spanked a shot past Flyers goalie Brian Boucher from the right circle and then ran, skated, and hopped across the ice to jump into the glass and celebrate with the Boston fans.

The Flyers went off-script late in the game. Daniel Briere slipped through the Bruins’ defense like a knife through butter, splitting defensemen Dennis Wideman and Matt Hunwick in a one-on-two charge up ice, then tucking the rebound of his own shot past Boston goalie Tuukka Rask to tie game at 4 at 16:38 of the third period.

Although the Bruins lost another of their top forwards in the opening minute (Marco Sturm) and gave up their first two power-play goals of the playoffs, they seemed to have the game in hand when David Krejci’s fourth goal of the playoffs gave them a 4-3 lead at 7:25 of the third period.

But Mike Richards, who nearly spoiled the Bruins’ afternoon by himself with a pair of assists and a goal, knocked in a power-play goal at 12:37 to bring the Flyers within one.

The Bruins have a 1-0 lead in this best-of-seven series, their first playoff meeting with the Flyers since the 1978 semifinals. Game 2 is Monday night at the Garden.

The game was not even a minute old when Sturm, the left wing on the No. 1 line with Patrice Bergeron and Mark Recchi, crashed into the endboards with Flyer defenseman Matt Carle, and fell back awkwardly onto the ice. Sturm had to be helped off, and within minutes, the team announced he would not return to the game.

The Bruins sent Steve Begin out in place of Sturm, and the 32-year-old winger promptly scored his first playoff goal in 30 NHL postseason games. Recchi earned the assist, forking a backhand pass out front from behind the net. Begin popped it past Boucher at 2:39.

Savard, out since March 7 with a concussion, had 2:35 of ice time in the first period, and was greeted with a standing ovation the first time he hit the ice at 1:15 of the first — the sellout crowd of 17,565 wildly waving little yellow Bruin towels.

The Bruins used that energy to dominate the first period, taking a 2-0 lead at 12:54 on Bergeron’s third goal of the playoffs. Wideman set up the goal with a slapper from the right point, and Bergeron jumped on the rebound to sweep in a backhander just outside the right post.

Vladimir Sobotka finished off a sprint down the right wing with a slide into the Philadelphia net, crashing hard into Boucher along with Flyer defenseman Ryan Parent. A shaken-up Sobotka left the game but was back on the bench for the second period. He took only two shifts, making a short bench even shorter.

So just when the Bruins seemed to be in charge, the Flyers picked up their pace. Parent scored the first goal of his career at 7:38 of the second period, slipping his top-of-the-slot shot through a screen. The teams traded man-advantage goals and the second ended with the Bruins cradling a 3-2 lead.

Miroslav Satan restored the Bruins’ two-goal lead with a power-play goal at 11:43.

Chris Pronger responded for the Flyers, the veteran defenseman scoring his 25th career playoff goal with a sharp power-play shot from the right circle.