Diagnosis isn’t as bad as feared 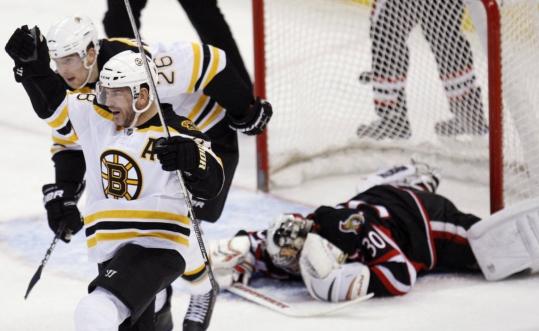 OTTAWA - A day after the Bruins feared an injury to their best player might render him unavailable for more than a month, they received some good news about Patrice Bergeron.

The center was diagnosed with a broken right thumb yesterday at Massachusetts General Hospital and is expected to miss two weeks. His Olympic berth is not at risk.

“[Monday] night, when the news was a little more dour, he was a little bummed out,’’ general manager Peter Chiarelli said. “Today when I talked to him, he was very, very happy.’’

Bergeron suffered the injury - three separate breaks at the tip of the thumb - when he was struck by a Dennis Wideman shot in the second period of Monday’s 3-2 loss to the Rangers. Bergeron’s thumb will be placed in a splint. He will not require surgery and can return to practice whenever he can tolerate the pain.

“It’s a big loss,’’ said coach Claude Julien after the Bruins’ 4-1 win last night. “Whenever you lose someone we consider our best player this year for any amount of time - a game, two games, two weeks - it’s a big loss.

“But if our players handle themselves like they did tonight, they all show up and battle hard, we’ll get through it. We’ve done it before. This isn’t the first time we’ve been put through the test.’’

Bergeron (11-20 -31 in 41 games) has been the Bruins’ go-to player all season for scoring, playmaking, penalty killing, and faceoffs. His versatility drew the eye of Team Canada executive director Steve Yzerman and earned him a spot on his country’s Olympic roster even though he wasn’t invited to the orientation camp last summer.

“I have talked to Steve Yzerman to update him on the injury, and he’s happy to hear the good news,’’ Chiarelli said. “So nothing’s changed with the roster. Steve will speak with Patrice in the next couple days.’’

Satan steps right in
Miroslav Satan was introduced to Ristuccia Arena Saturday for a skate during a teamwide off day, then participated in his first Bruins practice the following day. The plan was for Satan to continue practicing with the team for several more days, with a debut targeted for next Wednesday, the start of a three-game West Coast swing.

But Bergeron’s broken thumb pushed everything up.

Satan, wearing the No. 81 last seen on the back of Phil Kessel, skated on the right wing alongside Blake Wheeler and David Krejci last night against the Senators and finished plus-2.

“A little quicker than we talked about and I expected,’’ said Satan prior to the game.

With Bergeron unavailable, Milan Lucic (ankle sprain) still unable to play, and no help arriving from Providence, Satan was the only healthy forward remaining on the roster.

“I thought he looked good for a guy who hasn’t played all year and has had only two practices with our hockey club,’’ Julien said. “He’s obviously in good shape. I thought he wasn’t bad at all. He made some nice plays.’’

Satan, last seen skating alongside Craig Adams and Pascal Dupuis on Pittsburgh’s fourth line last season, said he can play both wings, but is more comfortable on the right side. During his best days, Satan was a shoot-first sniper who didn’t need to have the puck on his stick for very long before releasing it.

“He’s a guy that makes plays, even in tight and down low,’’ Julien said. “He’s a skilled player. He’s got good size. He’s not a physical player. I don’t think we expect him to be that.

“I don’t think we’re going to put all our eggs in the same basket and evaluate him tonight on what he’s going to bring. He should have had another week to prepare himself. But we’re pushing him to come in and he’s willing to do it.’’

Satan said he was satisfied with his conditioning despite not seeing any game action this season.

“It doesn’t feel like it’s been a long time after a few days of practicing,’’ Satan said. “It feels pretty normal.’’

Lucic is close
If there has been a primary complaint about the 2009-10 Bruins, it’s that they don’t bring enough emotion to each game.

“There’s been some flatness,’’ acknowledged Chiarelli.

Come Saturday, however, the Bruins’ leader in the passion department could be returning to the ice. Lucic, who was on the ice yesterday with assistant coach Doug Houda following the morning skate at Scotiabank Place, said his sprained left ankle feels better every day, and a return this weekend against the Rangers could be in his future.

“It’s definitely possible, but still not 100 percent right now,’’ Lucic said. “Everyone keeps telling me who’s had it before, ‘Don’t force this.’ We saw what happened to [Sidney] Crosby in 07-08. He came back early, played four games, then missed another two weeks after he came back early.

The ankle must be 100 percent for Lucic to dress for a game. He pushes off it every time he loads up to shoot, transfers his weight to skate, and launches himself for hits. When he comes back, Lucic said, he still plans on being the thump-first player who can jack up the bench with a hit or a fight.

“That’s what’s made me successful the last two seasons,’’ Lucic said. “I’ve been able to create that energy and be that physical presence. Hopefully when I get back, I can jump right back on board and create that right off the hop. But sometimes it takes somebody else to do it to get me going that way. It’s contagious.’’