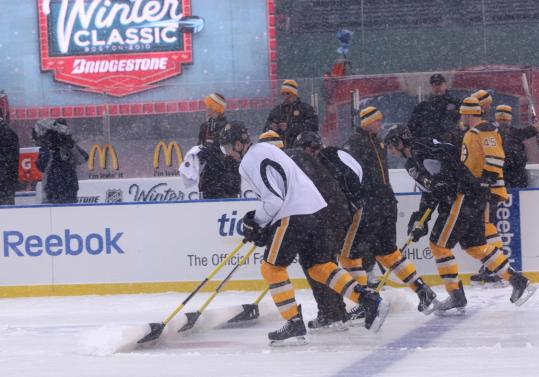 Some Bruins had to trade their sticks for shovels, but even that was a happy chore yesterday. (Bill Greene/Globe Staff)
By Dan Shaughnessy Globe Columnist / January 1, 2010

Ice on Fenway. Fenway on ice.

If you freeze it, they will come.

The Bruins and Flyers skated in snow on the Fenway sheet yesterday, and NHL czars no doubt hope the hockey gods provide the same weather for today’s Winter Classic.

The Classic has taken over as the NHL’s Super Bowl. It’s where Sidney Crosby meets Bing Crosby. For casual fans and nonfans, it’s a bigger draw than the Stanley Cup playoffs. Baseball owns the Fourth of July and football has a grip on Thanksgiving. Now outdoor hockey is taking hold as a New Year’s Day tradition.

Snow fell lightly when the Bruins first took the ice just after 11:30 yesterday morning. Perfect. This event is all about photographs, memories, and television ratings. Even the neutral-zone trap looks beautiful inside a snow globe.

“When you are a kid, you have to shovel off the rink before you play,’’ said Bruins winger Michael Ryder. “That’s what we did today.’’

While he spoke, Ryder was seated in front of a locker normally occupied by Dustin Pedroia. To his left was Marc Savard, standing in front of Mike Lowell’s stall.

Putting the Bruins in the Red Sox locker room guarantees new standards for civility and accessibility in the 97-year-old clubhouse. It also means the polite hockey guys have to walk down 13 steps to get to the dugout runway. At the end of the long tunnel, it’s another four steps to the dugout floor, then five steps to the playing surface. Skate guards are required.

Boston’s ancient, beloved ballpark is ready for hockey. The indoor batting cage behind the Red Sox dugout has been converted to a hockey shop with skate sharpeners and propane torches. Retired Bruins numbers have been attached to the right-field facade alongside the Red Sox numbers. Bobby Orr walks hand-in-hand with Joe Cronin (both No. 4). Same for Cam Neely and Carl Yastrzemski (No. 8), and John Bucyk and Ted Williams (No. 9).

Orr has his own stall and nameplate in the Red Sox/Bruins locker room. It’s a locker last used by John Smoltz. Shawn Thornton was issued David Ortiz’s locker, which makes some sense, but how do you figure Zdeno Chara dressing in a front of a stall that belongs to J.D. Drew? Think the big fella knows about J.D.’s reputation?

The standings on the Green Monster look strange. It’s weird to see “Buffalo,’’ “Ottawa,’’ and “Montreal’’ under the heading of “AL East,’’ but it’s nice to have Baltimore erased entirely for a few days.

Ticket-holders who forked over hundreds of dollars may need to enter Fenway with reduced expectations. Those nifty Sox box seats occupied by Dennis Drinkwater and Jeremy Kapstein - the ones in the front row behind the backstop? Those are not going to be good seats today. You’re much better off in the upper grandstand in left field. Today, Section 31 is better than Henrytown.

Bruins players had a blast skating outside for the first time. Savard joked (we think) that the ice surface was better than the sheet at the Garden. Family members joined the Bruins on the snowy ice after practice. With or without pucks, it was a postcard moment.

“Today was the day when you can be a little kid and enjoy it,’’ said defenseman Andrew Ference. “This is the only time in our lives when we can do this. And you don’t have to spend a lot of time in Boston to understand the significance of playing at Fenway Park.’’

Skaters know there’s a purity about the outdoor game. No Zamboni fumes. No ceiling. No loud echoes when the slap shots hit the glass. Different depth perception. Less sweat. More snot running down your nose. Harder ice. Colder benches. New issues of visibility for the goalies.

“When you pass the puck in the snow, it’s pretty hard to get it to go anywhere,’’ said Ference.

“You have to keep the puck up, maybe flip it to yourself,’’ added Savard. “With snow, you don’t see many tic-tac-toe plays. Just a lot of shots.’’

Seventy-five-year-old Billy Cleary knows about playing outside. Cleary grew up skating on the Charles River and Spy Pond. He played at Belmont Hill and Harvard before winning a silver medal with the US Olympic hockey team in Cortina, Italy, in 1956, and gold at Squaw Valley in ’60. All the games were played outside (Squaw Valley had a roof).

“In my day, there was a rule that the Olympics had to be outside,’’ Cleary said. “In Italy, we were right alongside the Alps and it was beautiful. You think you’re in heaven. You never knew what kind of conditions you were going to get.

“That’s the way we grew up. That’s the way we played. Playing outdoors, you had to learn how to handle the puck because you might never get it back. The sun was the thing you worried about most. The cold made it a little different, too. I saw pucks split in half when they’d hit the posts.’’

Cleary will be in the stands today. He’s a hockey guy and he wouldn’t miss it. Friendly Fenway meets the Hub of Hockey only once in a lifetime.