Non-baseball events: Fenway has just about touched ’em all 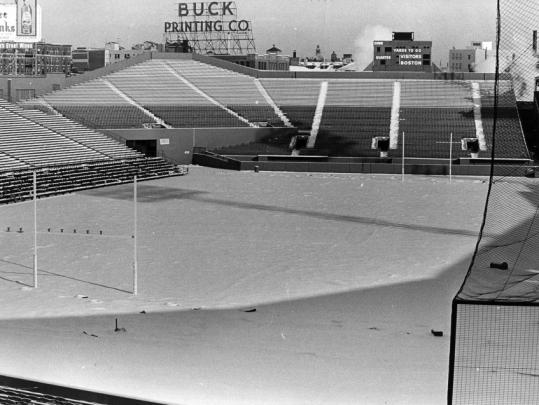 Oh, and that mop-top from Liverpool who used to be in a band known as the Beatles? Yes, Paul McCartney played Fenway, too.

It’s a very big deal, this Bruins-Flyers game at Fenway New Year’s Day. But it would be a mistake to think that the ballpark has been dedicated solely to hits, runs, and errors. Fenway was home of the Boston Patriots from 1963-68 and it has been a summer concert mecca since John Henry and friends welcomed “The Boss’’ in September 2003. Basketball, soccer, lacrosse, and boxing have also been featured in the lyric little bandbox.

Every New England school child knows that Fenway opened in 1912, just a few days after the Titanic sank in the North Atlantic. Boston Globe accounts of the first big-league game at the new ballpark were buried on Page One.

World Wars I and II touched everything in America, and Fenway was no exception. Following the World War I armistice, a couple of months after Babe Ruth’s Red Sox won the 1918 World Series, there was a military Mass at Fenway honoring New England’s war dead. On Nov. 4, 1944, three days before his final election, President Roosevelt delivered a campaign speech in front of 40,000 supporters at Fenway, saying, “Today, in this war, our fine boys are fighting magnificently all over the world . . .’’

FDR’s warm-up acts included Orson Welles and Frank Sinatra. “Old Blue Eyes’’ (he was “Young Blue Eyes’’ back then) sang the national anthem and came back out to address the crowd after the president departed.

Long before anyone thought about playing NHL games in outdoor ballparks, Fenway served as a professional and collegiate gridiron. The NFL’s Boston Redskins played home games at Fenway for four seasons in the mid 1930s. When the Redskins moved to Washington, the Boston Yanks played at Fenway from 1944-48. (The Yanks moved to New York, Dallas, and Baltimore before they became the Indianapolis Colts.)

Tom Yawkey banished football in the late ’50s and early ’60s because he wanted to protect the grass for baseball, but when Red Sox attendance plummeted, Yawkey welcomed the four-year-old Patriots to Fenway in 1963.

“We had played at BU and that was appreciated,’’ says Gino Cappelletti. “But once we got to Fenway Park, it immediately gave us a feeling of having arrived.’’

“Funny thing about those side-by-side benches,’’ says Cappelletti. “During the games, we would get closer and closer to the other team and start eavesdropping. I remember one game when we heard [Chiefs coach] Hank Stram calling for a screen pass. The next year, they put us over on the first base side.’’

A receiver/placekicker, Cappelletti booted a lot of footballs into the Fenway stands.

“The bullpens in right were pretty close to the end zone so most of my extra points went over the bullpens and into the bleachers,’’ he recalls.

Fans were allowed to mingle with players on the field after games and it was on the Fenway diamond that Tip O’Neill cornered Buffalo quarterback Jack Kemp and suggested Kemp run for political office. The Patriots left Fenway for BC’s Alumni Stadium in 1969.

There was lacrosse on the Fenway lawn almost 100 years ago. Joseph Lannin, who owned the Sox before the immortal Harry Frazee, was a lacrosse buff and, according to Richard Johnson, curator of The Sports Museum at TD Garden, “Lannin played games with the Boston Lacrosse Club on the Fenway diamond, using the same alignment that the Bruins are using for hockey at Fenway.’’

There was a New York-Boston soccer match at Fenway in 1931 and Yawkey allowed the Boston Beacons of the NASL to use Fenway as a home field in 1968.

According to Red Sox historian Dick Bresciani, the ballpark was home to boxing matches between 1919 and 1956. State auditor Joe DeNucci, once a highly ranked middleweight, remembers seeing Tony DeMarco beat Vince Martinez at Fenway in 1956.

“Fenway was great for boxing,’’ says DeNucci. “The way I remember it, the ring was between the pitching mound and second base and they put chairs out in the infield.’’

Steel-cage wrestling? It was staged at Fenway in 1968.

There’s no record of the Celtics playing at Fenway, but in 1954, the Harlem Globetrotters beat the George Mikan All-Stars, 61-41, in front of 13,344 at Fenway Park. The Boston Whirlwinds beat the House of David, 47-46, in the undercard game.

Hundreds of artists and bands have performed at Fenway before Red Sox games. The Boston Pops played anthems there and during the recent championship run, Sox choreographer Charles Steinberg got into the Way-Back Machine and found the Cowsills and the Kingston Trio to sing “The Star-Spangled Banner.’’ While the Sox were beating the Indians in the 2007 American League Championship Series, Dr. Charles famously featured the Dropkick Murphys and dozens of Irish step dancers in the center-field triangle.

Music without baseball is another matter. The Newport Jazz Festival was held at Fenway in 1973, but the Sox home field didn’t take hold as a concert venue until Henry bought the team in 2002. Henry is a frustrated guitar man and quickly recognized Fenway’s draw as a rock theater (and another way to draw every dime possible out of the ballpark).

Bruce Springsteen was Henry’s leadoff hitter, playing two shows at Fenway in the summer of 2003. In subsequent seasons, The Boss was followed by Jimmy Buffett and the Coral Reefer Band, the Rolling Stones, the Dave Matthews Band, the Police, Neil Diamond, Phish, and Sir Paul. Phish followers created a predictable haze over the yard, but the Stones show made the greatest impression on the Fenway outfield. Jumpin’ Jack Flash’s stage was only slightly smaller than Logan’s Terminal A and the Sox had to re-sod the entire outfield after the Stones rolled out of Boston.

Now it’s ice time. We’ve already seen Bobby Orr, Milt Schmidt, and Ray Bourque gliding across the Fenway sheet and it’ll be hard to forget the sight of a Zamboni parked on the warning track in front of the Wall.

Fenway Park has
touched 'em all