Rink in the New Year 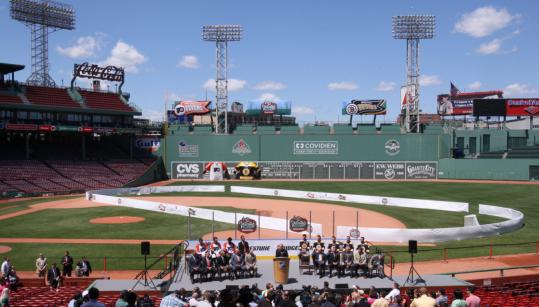 The real rink at Fenway Park, not the summer facsimile, is in the process of being created for the Winter Classic. (Bill Greene/File/The Boston Globe)
By Fluto Shinzawa Globe Staff / December 10, 2009

The Ice Rink at Rockefeller Center, which is where NHL facilities operations manager Dan Craig found himself last week for a Winter Classic promotional tour, is perhaps the most iconic outdoor rink in the world. For the next eight days, Craig’s task is to oversee the rollout of another outdoor sheet that, at least on New Year’s Day, will eclipse even the rink at the Rock.

Craig, better known as the Ice Man, and his 200-person team will drop the puck today on the construction of the rink at Fenway Park, where the Bruins and Flyers will do battle in the Winter Classic on Jan. 1. Craig’s challenge is to build a rink that complements the Fenway tableau and blends with the bandbox to create a striking, arresting image for the 38,000-plus fans that will be in attendance and those watching on NBC in the United States and CBC and RDS in Canada.

But above all else, Craig must ensure that the 200-by-85-foot ice surface meets the standard of indoor rinks to give the players a safe and smooth sheet.

“If it’s like that on game day, I’ll be resigning my position,’’ Craig said with a laugh when asked how Fenway’s surface will compare with that of the one at Rockefeller Center. “It will be better than that.’’

This is the Winter Classic’s third iteration (fourth if you count 2003’s Heritage Classic, the outdoor game in Edmonton between the Oilers and Canadiens). It debuted Jan. 1, 2008, at Ralph Wilson Stadium in Buffalo. Last season, the Blackhawks and Red Wings faced off at Wrigley Field in Chicago.

The upcoming version will be the most jam-packed Classic yet: public skating, an alumni game, and college matches all scheduled to take place at Fenway. Appropriately, the challenge to create an ideal rink will be the greatest yet.

Today, the NHL’s refrigeration truck, which made stops in Philadelphia, New York, and Bristol, Conn., en route from Toronto, will pull into town and park on Van Ness Street. First, Craig’s crew must create the rink’s main platform, which is scheduled to be completed by Sunday. For drainage purposes, the Fenway field crowns in the middle and falls off along the first and third base lines. Leveling of the field is not permitted, as one of Craig’s guidelines is to preserve Fenway’s integrity, from the field, stands, and most important the Green Monster.

“The setting itself is key. It’s why we’re there,’’ Craig said. “It’s such a great sports venue to be in. We have to look at how everything is laid out - where the roads are put in, how we’ll get from the auxiliary rink to the main rink. We’re very conscious of every square foot of that venue, and we’ll show utmost respect for it and the utmost respect for the grounds crew. The Red Sox have welcomed us with open arms. For us, it’s the hockey world going into the baseball world. They’re sports people. They’re happy to have us here. We will protect and respect their venue to the utmost.’’

First, a tarp will be placed on the field. Then, high-density Styrofoam and 52,000 feet of plywood will be installed 6 inches above ground level, then 32,000 square feet of heavy-duty DuraDeck material will be placed on top. Once the platform is complete, the team will transport ice panels from the truck through the center-field gate and lay the pieces down, as Craig puts it, like pieces of a jigsaw puzzle. The piping carrying 3,000 gallons of coolant required to keep the ice solid is contained inside the panels.

“It’s a custom-made aluminum floor,’’ Craig explained. “The solution is embedded, with the pipes inside the panels. They go in below the main floor. Back to the truck, we have 6-inch mains that can carry over 1,000 gallons per minute back to the truck.’’

The NHL purchased the ice-making system after the inaugural Winter Classic in Buffalo, when ice conditions fell off as the game went on. Last year at Wrigley, where the game-time temperature was 28 degrees, the ice was better than it was at Ralph Wilson Stadium, making for a safe and competitive game.

“It was letter-perfect last year,’’ Craig said. “There was good speed in the game. Good contact, good puck movement. The snow accumulation on the surface was light and fluffy.’’

On Tuesday, the team will install the boards and benches. Tuesday night, the crew will start making ice, a process that will continue overnight and conclude Wednesday. Ice at a standard NHL rink is usually 1 to 1 1/4 inches thick. But because there is flex in the floor outside, the ice at Fenway will be 2 inches thick. The crew will need 20,000 gallons of water to make the sheet. A week from today, the crew will use 300 gallons of white paint for the sheet, then add blue lines, faceoff dots, and goal creases. A week from tomorrow, at 9 a.m., the rink will be ready for skating.

From then until New Year’s Day and through the remainder of on-ice events, Craig’s responsibility will turn to maintenance of the facility.

“We would write the script exactly like Wrigley,’’ said Craig, who saw Chicago temperatures dip into the teens in the days prior to last year’s Winter Classic. “We had every piece of weather come through at Wrigley. If you look at the tape of the game, that’s how you would want it. It was 28 degrees. A nice, overcast day. It was bang-on. When the players hit the ice, you saw their eyes light up.’’

Graphic: Constructing a hockey rink at Fenway
Your comment is subject to the rules of our Posting Policy
This comment may appear on your public profile. Public Profile FAQ