Rask tends to be outstanding 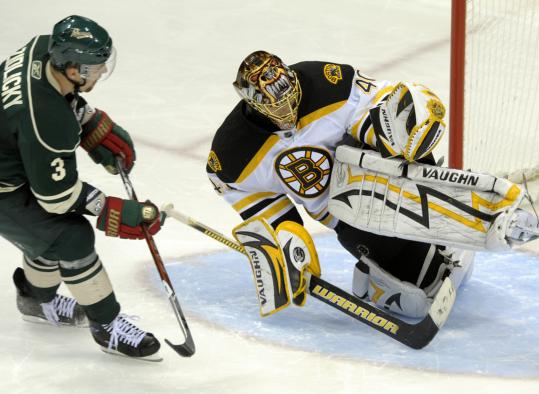 Let go by the Maple Leafs in a 2006 trade, 22-year-old Tuukka Rask has been a shutdown goalie this season for the Bruins. (File/Tom Olmscheid/Associated Press)
By Fluto Shinzawa Globe Staff / December 7, 2009

It will take no such time to determine whether the Bruins made out better on a previous trade with Toronto.

As he considers the state of the Leafs’ goaltending, current general manager Brian Burke can’t feel very good. Jonas Gustavsson (6-5-5, 3.14 goals-against average, .900 save percentage), who could develop into a high-level goalie, is on the shelf indefinitely following a heart procedure, his second this season. Ex-Bruin and career journeyman Joey MacDonald (1-4-0, 3.20 GAA, .892 save percentage), now with his fourth NHL team, is the de facto starter. Vesa Toskala (1-4-2, 4.09 GAA, .859 save percentage) will not be back after his contract ($4 million annual cap hit) expires after this season.

Then consider how John Ferguson, Burke’s predecessor, dealt a future No. 1 within the Northeast Division to the Bruins for a goalie who’s been with three organizations in three seasons. On June 24, 2006, a year after the Leafs selected Tuukka Rask in the first round of the draft, Toronto swapped the Finnish youngster for Andrew Raycroft.

Interim GM Jeff Gorton, at the Bruins helm while Peter Chiarelli worked out his exit from Ottawa, must have been wearing a mask at the time of the trade.

Raycroft, the NHL’s Rookie of the Year in 2003-04, was bought out by the Leafs following the 2007-08 season. Last year, Raycroft split netminding duties in Colorado with Peter Budaj. This season, he’s serving as Roberto Luongo’s backup in Vancouver.

Meanwhile at TD Garden Saturday, Rask showed the Leafs yet again why dealing him might have been one of the most ill-advised deals in the franchise’s history. Although Rask’s teammates gave him a seven-goal cushion by the third period, he made timely stops - the Leafs scored twice in the final frame - to earn his eighth win, one more than Tim Thomas.

“I think we all knew that, even last year,’’ defenseman Zdeno Chara said of Rask’s NHL potential. “He played a few games. Obviously playing in Providence, he was the No. 1 goalie, and now he’s playing extremely well for us. It’s nice to have two solid goaltenders who can basically steal the games for us. The both of them, even Timmy, they are playing extremely well for us. That’s great for us.’’

Rask, 22, is locked up for the next two seasons at an annual $1.25 million, a bargain. The Leafs, meanwhile, should be in the hunt for a goalie.

“People like to talk about that,’’ Rask said when asked whether he felt good about beating the team that traded him. “But I never played a game for them. I never went to training camp or anything. So I have no hard feelings. [Nothing] extra to show them I’m a good goalie, because it really doesn’t matter. It’s one game like any other, just try to win.’’

Last season, the Bruins had the league’s top goaltending tandem in Thomas and Manny Fernandez. This year, Thomas and Rask are on their way to being the NHL’s best duo. Thomas (7-7-3, 2.48 GAA, .914 save percentage) is coming off Friday night’s five-goal setback against Montreal, one in which he gave way to Rask in the third period. But the reigning Vezina Trophy winner has a league-leading three shutouts and is still considered the No. 1 goalie.

Rask, however, has proven he can handle a heavy workload. The Bruins opted for caution when Thomas had a hand injury last month. So instead of playing Thomas, coach Claude Julien tabbed Rask for six straight starts, of which the Bruins won four.

Friday night, after Julien had seen enough of his club hanging Thomas out to dry, he sent in Rask to start the third. Julien is usually slow to change goalies during a game. But the Bruins would forgo the morning skate the next day because they would host Toronto that night. So Julien gave Rask some early work to prepare for the Leafs, and he responded by blanking the Canadiens in the third period.

“As a young goaltender, he’s trying to make a name for himself,’’ said Julien after Saturday night’s 7-2 win.

“If you want to do that, you have to be ready for anything when you are called upon. He came in late in the third period [Friday] night. The reason for that was because I planned on using him [Saturday night]. We didn’t have a morning skate, so it was a good opportunity to put him in and let him get some action. He did a good job [vs. the Leafs]. He played well. It’s unfortunate that he lost his shutout late in the third.’’