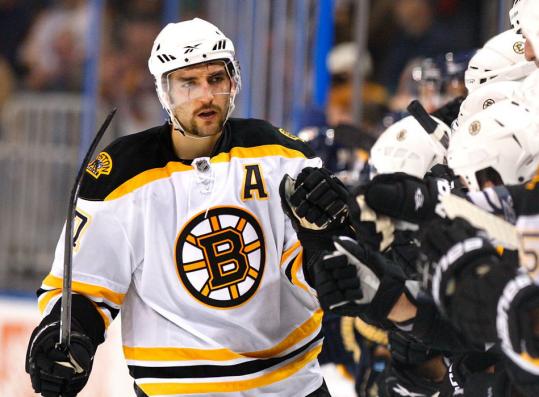 WILMINGTON - Any day now, possibly today, slick center Marc Savard is expected to sign his new contract with the Bruins, a seven-year extension beginning in 2010-11 with an average cap hit in the $4.5 million-$4.8 million range.

A source with direct knowledge of the negotiations, speaking on the condition of anonymity, confirmed the general terms of the deal and that the contract would be signed imminently.

Recchi, who will be 42 in February, signed a one-year deal worth $1 million over the summer, but said during a recent stop in Pittsburgh that he’ll assess his playing options at the end of this season.

Savard will be 33 when his new deal begins next October and will be 39 headed into the final year of the contract. On a total value of, say, $33 million, he’s likely to bank 90 percent over the first five years - close to a $6 million average.

It’s a familiar contract formula adopted by a number of clubs in the post-lockout era, albeit with a length of term considerably shorter than some of the extravagant deals made in Chicago, Detroit, Vancouver, Washington, Philadelphia, and even Long Island, where goalie Rick DiPietro agreed to a 15-year deal in the summer of 2006.

Maintenance required
Neither Patrice Bergeron nor Matt Hunwick dressed for a one-hour on-ice workout, each granted what coach Claude Julien refers to as a “maintenance’’ day. Both players, he said, will suit up tomorrow night with the Lightning in town.

“No ifs or buts,’’ promised Julien.

Bergeron was felled in the first period of Saturday’s 4-3 shootout win over the Senators. One of the two forwards on the penalty-killing unit, he shifted quickly to his right to close off a lane, only to have his right leg splay out slightly and his ankle appear to buckle. As he was attempting to straighten up, the 24-year-old pivot was nailed by a Filip Kuba blast.

The combination slip and slap sent the hobbled Bergeron to the dressing room for most of the remainder of the period. He returned to play a shift in the final minute of the first, then played effectively throughout the evening, into the OT session, and was first off the bench for the shootout.

Hunwick, who exited the playoffs last spring because of an emergency splenectomy, logged 14:42 in ice time against Ottawa, all but 1:24 at even strength, landed two shots on net, and blocked another. His partner, Mark Stuart, logged 14:29.

Injuries from blocked shots and the like, lamented Julien, have become an increasing problem around the league. Bergeron, noted the coach, was attempting to regain his balance just before he got hammered at short range by Kuba’s blast.

“Just an unfortunate situation,’’ explained Julien. “Any time you have a player back, not seriously injured, it’s a fortunate thing in today’s game . . . a ton of injuries around the league . . . broken feet and other things seem to be common these days.’’

“In the works for a while,’’ said Julien, who agreed to a long-term extension over the summer. “I really wanted them to be with me. Assistant coaches never get enough credit for what they do - behind the scenes, one-on-one work with players, extra work on the ice. It’s a good group.’’

They are certainly an amicable bunch, usually smiling and always cheery in disposition. But they have almost zero public persona or connection to the fan base because Julien doesn’t allow them to talk with the media about game or personnel issues (comments on the weather are permitted). They are the coaches from the Cone of Silence.

Hole in middle
With Bergeron out of the practice mix, the Bruins skated one body short, which left his linemates, Marco Sturm and Recchi, to work alone on the doughnut line (no center) . . . The defensive unit, minus Hunwick, skated as a full six-man unit, with Boychuk picking up the slack. Boychuk, who has played in only three of 26 games, routinely dresses for pregame warm-ups even when he knows he will not play. “The warm-up ends and then you get dressed [in street clothes], that’s kind of brutal,’’ said a smiling Boychuk. “But you want to feel connected to the team, right? I want to be around the guys as much as possible, not just the practices.’’ Julien lauded Boychuk’s work ethic and attitude in practice, noting that cast extras have to work out in “practices as if they are games.’’ Boychuk, he added, has approached his role with an outstanding attitude. “Whatever we ask of him,’’ said Julien, “he does it and he does it willingly.’’