Up and down the wing 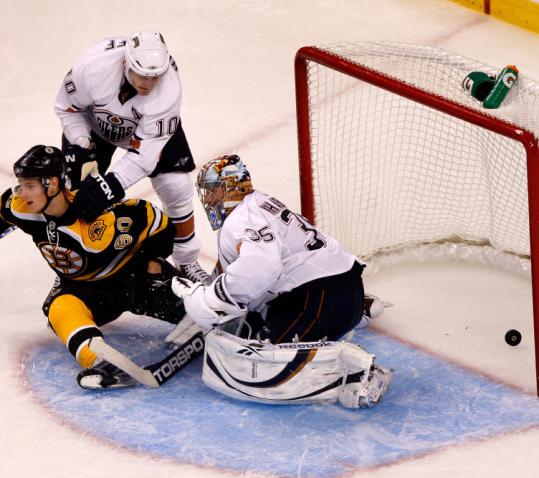 When the Bruins recalled Brad Marchand from Providence Oct. 18, they knew they’d be getting a hard-nosed energy wing with a good amount of skill - he has an above-average release and some weight to his shot - to complement his speed and grit. They also knew that, given the nature of NHL rookies, Marchand would have his peaks and valleys.

So far, they’ve been correct on all counts.

“You try not to give him too much at first,’’ Julien said. “We know that Brad’s got a pretty good shot. Could he be on the power play? Maybe. But at the same time, I think he’s got a lot to chew on right now.

“We’ve got a few of those examples, and we’ve been showing him those kinds of things. It’s important for him to understand that it’s those little things at this level that make a difference. That’s how you help a young player grow into a role.

“He’s been pretty good. The mistakes he’s made have not been for a lack of effort, but probably lack of experience in this league. You get that experience from playing. We have to sometimes sacrifice that for the sake of a player getting better.’’

Marchand was a top-line player in Providence (he skated with Zach Hamill and Vladimir Sobotka) prior to his recall. In six AHL games this season, Marchand had led the P-Bruins with six goals.

Marchand projects to be a bottom-six NHL forward, but because of Milan Lucic’s broken finger, the big club needed him to assume a greater role when he was recalled. In his NHL debut, Marchand created a turnover and set up a Ryder goal against Nashville Oct. 21.

But Marchand has also made the expected rookie mistakes. Against New Jersey last Thursday, he tried to throw a big hit and almost ended up in the Bruins bench. Marchand also had trouble clearing the puck on several occasions.

“In the American League, junior, and college, at points you can coast around and take shifts off,’’ Marchand said. “Up here, you can’t do that. One shift in every game can cost you a couple points.

“But I’ve felt more comfortable with the puck. I’m trying to hold onto the puck a little longer and trying to do some other things.’’

Pisani back in action
Providence College alum Fernando Pisani appeared in his first game of the season after sitting out the first 13 because of a back injury. The Oilers winger skated 10 shifts for 8:08 of ice time.

“It felt a little tiring,’’ Pisani said. “It was a pretty high-tempo game. I think I got better as the game went on and my legs got under me a bit. It’s always tough to play that tempo after a little while out.’’

Old Oil men
Julien was employed by the Edmonton organization for two-plus seasons, when he was coach in Hamilton, the Oilers’ AHL affiliate. Assistant coach Geoff Ward is also an ex-Oiler. Ward was Julien’s assistant in 2001-02. Ward then took over the head job when Julien was hired by the Canadiens, who shared the Hamilton affiliation . . . Edmonton’s Ladislav Smid, who had been diagnosed with the H1N1 virus, was in uniform yesterday. Lubomir Visnovsky and Denis Grebeshkov also have been suffering from flu-like symptoms but have not been diagnosed with H1N1. Grebeshkov played yesterday, while Visnovsky did not . . . NESN color analyst Andy Brickley worked yesterday’s game from between the benches instead of his usual ninth-floor spot alongside Jack Edwards . . . The Bruins went 2 for 2 on the penalty kill. They haven’t allowed a power-play goal in the last five games . . . Yesterday was Julien’s 100th win as Bruins coach . . . The Oilers haven’t scored against the Bruins in their last three meetings.