Ryder back in fast lane

Speedy forward has game in gear 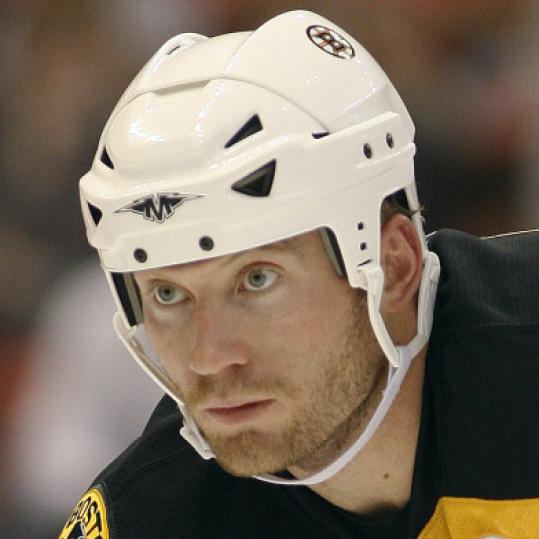 OTTAWA - Claude Julien’s perpetual message to Michael Ryder, from Hull to Hamilton to Montreal to Boston, has always been the same: Move your feet.

“When he picks up his skating, the rest of his game seems to follow,’’ said the Bruins coach. “Whenever you see Michael going through a tough game, it’s because he’s not moving his feet. That’s something I’ve been telling him for years.’’

When he doesn’t skate, the rest of Ryder’s game plummets. But for the last five games, Ryder’s been doing exactly what Julien has been preaching to him ever since their days together in junior hockey. Over those five games, Ryder skated with three centers: David Krejci for one, Marc Savard for two, and Patrice Bergeron for the last two. Despite the pivot turnover, Ryder’s skating has been as good as it’s ever been in Boston. Ryder’s whirring wheels have translated into four points in five games.

“When I move my feet and start skating, that’s one thing I know - when I start playing well, that’s what I’m doing really well,’’ Ryder said. “The last few games, I’ve been trying to do that more. This year, I wanted to get off to a better start than I did last year. It’s just a matter of me making sure that it’s what I do. Me and Claude have talked a couple times. He knows what I need to get going. Just moving my feet, things happen. I get the puck, get more chances, create things. Everything seems to happen when I just get my feet going.’’

Ryder, who skated with Bergeron and Brad Marchand in Thursday’s 4-3 shootout loss to Philadelphia and Wednesday’s 3-2 win over Nashville, has three goals and three assists overall. Last season, Ryder potted 27 goals, second most on the team behind Phil Kessel. This year, Ryder is one of the right wings expected to produce more with Kessel gone.

So far, Ryder has brought more than goal scoring. When he’s skated well, he’s been one of the more effective Bruins on the forecheck. Ryder and his linemates have protected the puck and cycled for spurts of the last two games. He hasn’t been afraid of going to the high-traffic areas. Most surprisingly, Ryder’s skating and puck protection have made him tough to slow when he’s stickhandling through the neutral zone and into the offensive zone.

“He’s pretty strong on the puck,’’ Julien said. “For the most part, he’s usually pretty good at protecting the puck. He’s hard to get knocked off when he’s on his game. That’s why when he’s skating and he’s leaning on guys, he’s pretty good at getting in those scoring areas.’’

A pinch of satisfaction
At 7:36 of Thursday’s second period, Matt Hunwick beat Ray Emery to give the Bruins a 2-1 lead over the Flyers. But what Hunwick did moments before letting loose his point shot was even more encouraging than the goal.

“The last two games, I’ve definitely felt the best I had all season,’’ Hunwick said. “That hesitation is leaving my game right now. I just see the play and make the first play that’s available. Hopefully make the right play.’’

After Jeff Carter won a defensive-zone draw against Krejci, the Flyers center pulled the puck back to Chris Pronger. From behind the net, Pronger started the breakout with a pass to Danny Briere on the right-side wall. Hunwick, who had read the play, promptly pinched down to engage Briere in a puck battle. Because of Hunwick’s pinch, Krejci gained control of the puck, then dished a pass back to the defenseman at the left point. With Pronger and Mark Recchi cutting down Emery’s sightlines, Hunwick flipped a wrister on goal that sailed into the net.

“I didn’t necessarily keep it in right off the bat,’’ Hunwick said. “But I just caused enough confusion that Krech got the puck and made a nice little pass to me on the point.’’

Early on, Hunwick’s decision-making, with and without the puck, wasn’t as crisp as he’d hoped. As a result, Hunwick’s play and confidence took a hit. But in the last two games, Hunwick’s felt more comfortable, and his play has reflected his mental improvement.

“I think he’s getting better and better,’’ Julien said. “We all know he had a tough start. Right now, I see him playing a lot better.’’

Thornton is ready
Shawn Thornton, out the last two games because of an undisclosed injury, should be back in uniform tonight. Thornton was one of four Bruins (along with Tim Thomas, Johnny Boychuk, and Guillaume Lefebvre) to skate yesterday at Bell Sensplex, the Senators’ practice facility. “I’ll be ready,’’ Thornton said . . . The Senators, down 3-0 to the Predators heading into the third period Thursday, rallied to tie the game - Chris Phillips netted the equalizer with two seconds remaining in regulation - to gain a point before losing in overtime, 6-5. “He’s come in and taken a pretty hard-nosed approach,’’ Julien said of Ottawa coach Cory Clouston, who replaced Craig Hartsburg last season. “With him, it’s been my way or not. Dany Heatley’s a perfect example of that. He didn’t want to buy in, so they decided, ‘Hey, we’re not changing our coaches this time. We’re going to go with players who want to play his way.’ With the guys that bought in, you’ve seen what’s come out of that. With their whole approach to their game, they’re a lot grittier than they’ve ever been. That’s been the identity of their coach most of the time.’’