Ference has his game face on 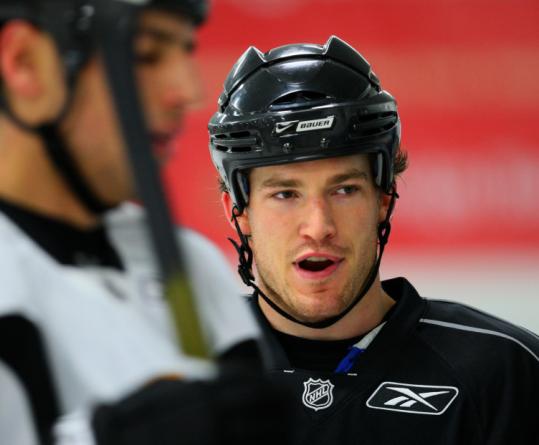 WILMINGTON - Just over three months have passed since Andrew Ference was admitted to Massachusetts General Hospital for groin surgery. Given the uncertain nature of post-op performance, nobody is quite certain how the veteran defenseman will perform.

What is certain about Ference, however, is how he can perform when he’s healthy. From Claude Julien’s perspective, that’s pretty darn well.

“There was a point last year when we talked about him being probably our best defenseman,’’ said the Bruins coach. “That’s what he’s capable of being - a real, real good defenseman when he’s healthy and he’s on his game. With his mobility and his vision, even though he’s a defenseman who’s small in stature, he’s not afraid to mix it up and he’s not afraid to drop the gloves either.

“He brings a lot and he’s a very intelligent player. He makes a lot of smart plays and has great hockey sense. If this guy was a 6-foot-3 type of player, he’d probably be recognized more as a superstar defenseman in this league.’’

At the start of last season, with Zdeno Chara still finding his rhythm following offseason shoulder surgery, Julien leaned heavily on Ference. The mobile defenseman responded. Over the first 15 games of 2008-09, Ference recorded seven assists while averaging 22:43 of ice time per appearance, third-most behind Chara and Dennis Wideman. On Nov. 1, in perhaps the most entertaining match of the season (the bloodbath against Dallas), Ference dropped Sean Avery with an open-ice clock-cleaning, then took on the mouthy forward in a gloves-off bout.

So it’s no surprise that in the second round of the playoffs against Carolina, when Ference played only three times because of the groin injury suffered April 4, the Bruins missed his hard-nosed, puck-moving play.

Injuries regularly have limited Ference since he arrived with Chuck Kobasew from Calgary on Feb. 10, 2007, for Brad Stuart, Wayne Primeau, and a fourth-round pick. In 2007-08, Ference missed four games because of a core injury. He suffered a right knee sprain that knocked him out for 12 games. Ference then went down for seven more games with another sprained knee.

Last season, Ference appeared in only 47 games. He sat out 31 games after Montreal’s Andrei Markov fractured his right tibia with a fast-moving one-timer. Ference underwent a procedure that involved the insertion of two pins to help heal the break. But after his return, Ference couldn’t regain the high-level game he had before the injury.

“Coming back from that broken ankle last year, you’re just missing that quick little crossover, that quick little step,’’ Ference said. “And you just automatically start playing a little more defensive. You’re doing more protecting than aggressively stopping plays or aggressively going after guys. If you don’t feel like you have that extra little pop or that extra stability in that part of your body, it’s probably human nature to get a little more defensive and protect it.’’

The groin woes peaked on May 6 after Ference absorbed a thunderous season-ending hit from Scott Walker. Because of the surgery, Ference had to delay the start of sprints and heavy weightlifting during the summer.

If Ference is fit and ready for the regular season, the 30-year-old will give the Bruins some much-needed presence on their second pairing. Ference and Wideman are familiar with each other, having skated together for parts of last season. If needed, Ference, one of four lefthanded defensemen, could switch to the right side.

Ference also will be playing for his next contract. He is in the final season of a three-year, $4.2 million deal. With puck-moving pups Jeff Penner and Andrew Bodnarchuk pushing for NHL jobs, Ference could be entering his last year of Black-and-Gold service. Ference is a Julien favorite - the coach describes him as a low-maintenance player - and is considered a leader. But with a salary cap crunch and a dip in the $56.3 million ceiling expected for 2010-11, the club might have to let him walk.

“It hasn’t really bothered me that much because I’m on a good club, a good team, a good organization,’’ Ference said of his expiring contract. “I think that if I continue to play good hockey, those things really take care of themselves. I think it would be a lot more stressful situation if you’re on a team that wasn’t really going anywhere or going around without a rudder.

“We’ve established something really good here and I’ve been able to be a part of it the last couple years. When you’re on a good team and involved with teams like Calgary or here where you’re part of that building process and going up, not down, that helps take care of individual stuff no matter what.’’