THIS STORY HAS BEEN FORMATTED FOR EASY PRINTING
Bruins 4, Hurricanes 2 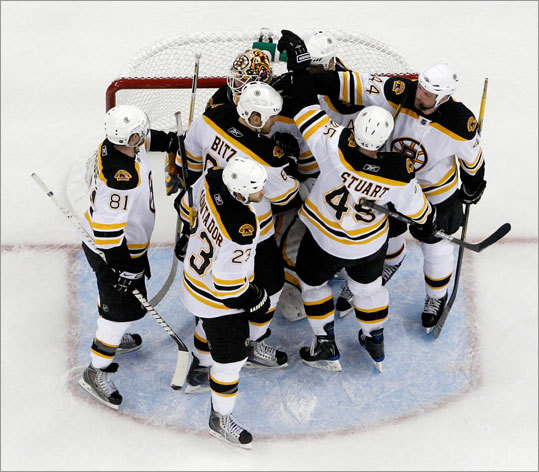 RALEIGH, N.C. - This is not the way the Bruins would have written up the game plan.

Last night, after swiping a 2-0 lead, they reverted to their Game 4 habits, turning pucks over in the neutral zone and giving up scoring chances. In the third period, ahead by a 4-1 score, they saw old friend Sergei Samsonov trim the advantage to two goals. Then they gave the hard-charging Hurricanes a pair of power plays.

But for a team that lost three straight games and put itself in a 3-1 series hole, perhaps the script was a fitting one to follow to bring the Hurricanes to the edge.

Playing for their lives for the second consecutive game, the Bruins put themselves in position to make history. Before 18,680 at the RBC Center, the Bruins grabbed a 4-2 win over the reeling Hurricanes to set up tomorrow night's Game 7 at TD Banknorth Garden.

The Bruins, who never have rallied from a 3-1 hole to win a playoff series, have all the momentum heading into tomorrow.

"It's pretty high," forward Byron Bitz said of the team's confidence level. "We knew it was in here all the time. It was just a matter of getting that attitude. Unfortunately, it took right until we couldn't afford to lose again for us to wake up enough to really start playing the way we should be.

"Now we're rolling along. Confidence is high. We know we need to battle every shift. It's not over yet. We need to play hard in Game 7."

The Bruins weren't as dominant last night as they were in Sunday's 4-0 win in Game 5. But two first-period goals gave them the cushion they would need. The Bruins opened the scoring when Chuck Kobasew won a puck battle in the defensive zone and chipped it off the wall to Patrice Bergeron. The center shook off Erik Cole's backcheck and slid a cross-crease pass under defenseman Anton Babchuk to Mark Recchi, who tapped it home at 2:01.

Then after some strong cycling by the Bruins, Steve Montador found the puck on his stick at the left point. Bitz gained position on Jussi Jokinen to set a screen on goalie Cam Ward, and Montador smoked a slap shot into the net at 5:04.

"We got in there and got a really good shift," Bitz said. "We were working them down and working down low. That opens up the points like we've talked about all along. I was just trying to get a good screen. Monty made a great shot that went in."

Carolina center Matt Cullen made it a 2-1 game in the second period, but the Bruins seemingly sucked the life out of the Hurricanes with a pair of goals in the middle frame. First, Milan Lucic powered his way through three Carolina sticks, then set up Marc Savard for Boston's third goal at 8:53. Then Kobasew drove to the net and batted in a Bergeron feed at 18:03.

Samsonov's third-period goal cut the lead to 4-2, and at 8:11 - less than a minute after Samsonov had tapped home the rebound of defenseman Tim Gleason's shot - Montador was sent off for slamming forward Tuomo Ruutu into the boards.

On the first power-play shift, No. 1 center Eric Staal had two close-range scoring chances that goalie Tim Thomas turned aside. Then after the Bruins got scrambly, defenseman Joe Corvo walked the puck into the high slot and hammered a blistering slap shot on goal. An off-balance Thomas stayed on his skates just long enough to get his torso in front of Corvo's shot.

"Somebody was bumping into me," said Thomas. "I was kind of turned half-sideways. It got a little crazy there. I just wanted to throw anything in the way that I could."

Just 35 seconds after the Bruins killed off Montador's penalty, Dennis Wideman flung a puck into the crowd at 10:46. The Bruins had to kill another penalty.

The Bruins usually have six forwards for the penalty kill. But Blake Wheeler, who usually kills penalties with David Krejci, was a healthy scratch for the second straight game. Savard serves as Stephane Yelle's partner, but the No. 1 center was injured on a knee-on-knee hit he absorbed when he collided with Carolina forward Chad LaRose earlier in the period. (Savard departed at 6:12 of the third after playing two more shifts, but coach Claude Julien said he will be available for Game 7.)

The Bruins, perfect on the penalty kill in Game 5, pitched another shutout last night.

"It was a group effort," Julien said. "Timmy made some big saves on some of those opportunities. Our guys were able to bear down."

Carolina had one last-ditch effort when forward Scott Walker buzzed down the wing. Walker faked a wraparound and sent the puck out front to Cullen. But Thomas (31 saves) held his ground instead of biting on Walker's wraparound and covered Cullen's shot at 13:30.

"I was fortunate to have stayed with it," Thomas said. "Walker made a pretty good move. I thought he was going to go all the way around the net. It just happened, out of my far peripheral vision, I saw that he was passing it. I was able to hold my leg there."

And now it comes down to this: Winner takes all tomorrow.

"Getting to Game 7 is one thing," Julien said. "Now we need to decide what we're going to do with it. You're going to see two teams with a lot of desperation in the next game. It should make for a real interesting game."