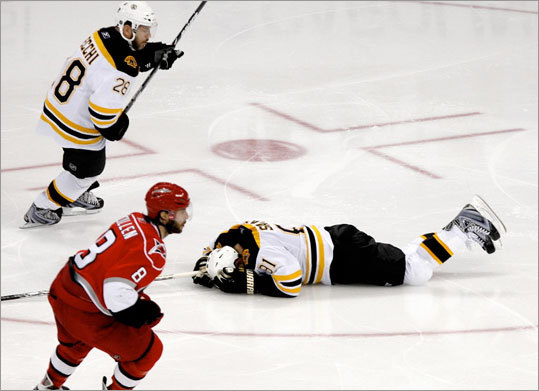 (Barry Chin / Globe Staff) Bruins center Marc Savard (91) lays on the ice after taking a hit to his knee in the third period.
By Fluto Shinzawa Globe Staff / May 13, 2009
Text size – +

RALEIGH, N.C. - At 6:12 of the third period, the Bruins saw a disheartening sight: Marc Savard gliding off to the dressing room, his night finished because of a right knee injury.

But coach Claude Julien wiped out any fears of a Savard shelving after the game. Julien said he had sent Savard off as a precaution and that he will be available for Game 7 tomorrow.

"He'll be fine for the next game," Julien said.

The Bruins could hardly afford to lose Savard, who scored last night's game-winning goal. After Milan Lucic picked his way through the Carolina defense, the left wing spotted Savard open at the far post. Lucic slipped a pass to Savard, and the center beat Cam Ward at 8:53 of the second to give the Bruins a 3-1 lead.

Savard was injured during a power play to open the third period when he had a knee-on-knee collision with Carolina forward Chad LaRose. Savard remained down for several moments before he skated to the bench with assistance from Patrice Bergeron and trainer Don DelNegro. He took two more shifts before leaving for good.

Divergent views
Scott Walker called it a fight. Peter Chiarelli termed it an ambush. Aaron Ward, the recipient of Walker's right hand upside his head late in Game 5, had another description.

"It's a joke. It's honestly a joke," Ward said of Walker's non-suspension.

Ward, with some bruising under his left eye, said he was yapping with Matt Cullen, angry that the center had delivered a slash to his legs. Walker jumped into the fray and threw a wild gloves-on left punch.

Ward turned to face Walker, who shed his gloves, grabbed the defenseman's shirt with his left hand, and dropped him with a right fist. Ward said he never exchanged words with Walker. Ward also said he never saw Walker's gloves-off right hand until it was a foot from his face.

"The best part about this whole situation," said Ward, "is the first approach they took was that, 'He was in there because Matt Cullen has a history of concussions.' Now when they realized that the following action was [Walker's] punch to the head, that story goes out the door. That would also involve a third man in with Scott Walker.

"They dropped that pretty quick. Then they went to, 'We were engaged in a conversation.' If you watch the video, I didn't see him and I didn't talk to him. My hands were beside my side. I'm thinking for sure that this is a usual scrum. Gloves on. Take a punch. No big deal. Three minutes left in a game, nothing big can happen.

"Out of convenience, they went to another story. I obviously think it's a convenient story that the NHL accepted. I think if you as the media accept that, you're a bunch of sheep."

Walker, who was fined $2,500, played last night alongside Cullen and LaRose, his usual linemates. Walker had an assist in 13:11 of ice time.

"I thought there was a fight and there wasn't, apparently," said Walker. "So I'll pay my fine and I accept the penalty."

Chiarelli spoke with league disciplinarian Colin Campbell yesterday morning. The Bruins general manager believes the suspension and the instigator penalty were wiped out because the league determined that a fight between Ward and Walker was about to take place. He disagreed, saying Walker not only acted as the instigator but as the third man in. Ward said Campbell never called him to get his take on the incident.

"What's missing is the third man in," said Chiarelli. "[Ward is] scuffling with Cullen. I can understand if Walker comes in and they engage. Maybe I could see them rescinding there. To me, it was an ambush."

Counterpunching
Carolina general manager Jim Rutherford had the following to say after the Walker ruling: "We are satisfied with the league's ruling. After our team received several punches throughout the series leading up to Game 5, it was a matter of time before one was going to be thrown back."

Yesterday, Chiarelli brushed off Rutherford's statement, noting that such intensity is part of playoff hockey.

"The punches that were delivered by both sides over the course of a series? That's part of the series - the scrums and face-washing," Chiarelli said. "You saw that in the Montreal series. That happens. To compare this punch to all those punches is uncalled for. To me, there's no comparison."

Ward on Rutherford: "I know Jimmy's a pretty staunch Republican, but I didn't know he brought Karl Rove in here to spin it for him."

No shield needed
After Game 5, the Bruins were quick to hint that Ward might have suffered a broken orbital bone. Yesterday, Ward said X-rays had shown "something," but not enough to keep him out of uniform. Team doctors suggested Ward wear a shield. "I haven't worn one in 16 years," Ward said. "I'm not going to start now." He skated 26 shifts for 20:09 of ice time . . . Chiarelli said Johnny Boychuk would have been recalled had Ward been unavailable . . . Forwards Erik Cole and Tuomo Ruutu led the hit parade last night with eight apiece . . . Game 7 tickets go on sale today at 11 a.m. through Ticketmaster and www.bostonbruins.com . . . Andrew Ference is highly doubtful to play in Game 7. Chiarelli said the lower-body injury Ference suffered in Game 3 was not related to the ailment that sidelined him for the first round . . . Blake Wheeler was the healthy scratch for the second straight game.