As an activist and adventurer, Ference leaves mark outside hockey 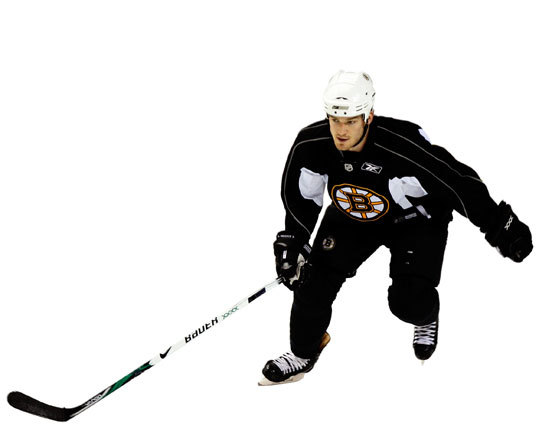 The off-ice résumé of Andrew Ference reads more like that of a good-will ambassador than a hockey player.

He initiated the NHL Players Association's Carbon Neutral Challenge, in which players offset travel by purchasing carbon credits. He is a spokesman for 350.org, a campaign committed to raising awareness about climate change (the name comes from 350 carbon dioxide parts per million, considered the ceiling of CO2 levels). He has been invited by Canada's New Democratic Party to speak at its summer convention about environmental issues. He has worked in the field for the humanitarian organization Right To Play.

All this has taken place because of Ference's profession.

"If I didn't play hockey, I'm just another person," said the 30-year-old Ference, an Edmonton native. "Hockey gives you the soapbox, especially up north. Any hockey player has the opportunity to represent something. It's a shame if you don't represent something productive."

For nearly the last month, the sport that has given Ference the stage to express his views has been absent. A lower-body injury April 4 knocked the Bruins defenseman out for the rest of the regular season and the first round of the playoffs. They were the first postseason games Ference had missed.

Since last week, Ference has been practicing with the team and is expected to dress tomorrow for Game 1 of the second round against the Carolina Hurricanes.

Ference, the son of a dentist and a doctor, might have entered medicine. But first and foremost, he is a hockey player. Everything builds off that.

In the winter of 2006-07, general manager Peter Chiarelli wanted a puck-moving defenseman for Brad Stuart, who was not going to re-sign with the Bruins.

"We remembered him from Calgary's 2004 Stanley Cup run," Chiarelli said of Ference. "He played a significant role in that. With the compete level of that Calgary team, he was part of it. He's always been a leader. He was a leader in junior hockey. A leader at World Junior. The book on him was that he was an undersized No. 5 defenseman that played hard. We felt his skills were more than a No. 5. And we liked the fact that he played hard."

Ference has surpassed expectations. Before he suffered a fractured right tibia Nov. 13, he was Boston's best all-around defenseman. He is one of the corps' best skaters. He's been solid positionally. He has manned the point on the power play. He can move the puck and join the rush.

What has not been a surprise is Ference's off-ice presence.

A helping hand
While in Calgary, Ference met environmentalist Dr. David Suzuki. Ference, who had already changed to fluorescent light bulbs and switched to wind power in his Calgary home, sought a big-picture approach on how hockey players could be agents for environmental change.

The solution: purchasing carbon credits to offset the mileage players burn during the season. Currently, more than 420 NHLPA members contribute $350 per season to offset the 10 tons of greenhouse gas emissions each player produces per year.

"These offsets are making a difference in the world," said Katie Harper, public engagement coordinator for the David Suzuki Foundation. "And it's the idea that these players like Andrew are sending the message. Andrew, like many players, is making changes in his own life."

The summer after Ference launched the challenge, he made his first field visit for Right To Play. Steve Montador accompanied him to Tanzania, where they saw poverty like they had never witnessed. But they also recognized the hope they could impart to children.

"They get inspired because important athletes come to see them," said deputy director Mark Brender. "In turn, the athletes get inspired and see the impact of the program. Andrew did that. It was pretty special to see how Andrew and Steve jumped in and got involved, playing games with the children. We use games to teach children about malaria, HIV, cooperation, and how to use sport and play as tools to open up discussions on so many other topics. They allow children to express themselves and gain confidence. When he was there, he just jumped in with all his passion and gave it everything he had."

Zdeno Chara had been researching prospective charities. After learning about Ference's experience, Chara hooked on with Right To Play and visited Mozambique last summer. He then climbed Mount Kilimanjaro as a fund-raiser. At the All-Star Game, Chara earned $24,000 for Right To Play by winning the Hardest Shot competition.

"Zdeno really stepped up in a big way," Brender said. "He did it because he believed in Andrew."

Family man
On Ference's back is a tribute to 3-year-old daughter Ava: a tattoo with her name in flowing letters, flanked by a pair of Haida eagles, traditional artwork of the Haida tribe of British Columbia. Ference has a dozen tattoos, memorializing everything from his Memorial Cup win (an image of the Portland Winter Hawks, his junior team) to his country (a Canadian flag).

Ava's arrival hinted at the end of his motorcycle days. In 1999, after turning pro, Ference purchased a Fat Boy from an Edmonton dealer. He went on rides with some of the folks who hung around the shop. He got to know one rider named Des Bekkerus.

One day, Bekkerus showed Ference a snowboarding magazine with a picture of Krista Bradford, her sister. Bekkerus invited Ference to her family's home in Vernon, British Columbia, to meet her sister. The two clicked. They were married in 2002.

Ference's motorcycle, however, didn't simply serve as a precursor to marriage. Each summer, he would take long-distance solo trips, packing some extra shirts and pants and staying at motels along the road. One ride stands out: a trip from , British Columbia, to a buddy's wedding in Las Vegas.

" barren desert," Ference recalled of a stretch in Nevada. "I had to map out my fuel stops. With a Fat Boy, you get [155 miles]. That's it. I had extra fuel canisters and I mapped out the towns. A couple of times, I'd get a town mapped out, get there, and it was a ghost town. Abandoned. I hadn't seen a car in three hours. The combination of not knowing if my town was going to be there and the landscape - it's really cool, with government land on one side and mountains on the other - was crazy. I got into Vegas around midnight. You can see the glow of Vegas from forever away. It's pitch-black desert, but you can see the glow for at least half an hour before you get to town."

The Harley has since been mothballed. The March 22 arrival of second daughter Stella confirmed the end of Ference's riding days. He plans to sell the bike to his uncle Ray Ference, with the proceeds going to Right To Play.

Ference also has another fund-raiser in the works. He has pledged to donate half his playoff share to the New England Grassroots Environmental Fund's Boston Grant Initiative. With a full share worth approximately $100,000 for winning the Cup, Ference is hoping he's in for an extended run.

He also has some space on his back for another tattoo to honor Stella. But as long as Ference and the Bruins are playing, he is forbidden from getting another tattoo because of the issues of in-season healing. The paint will have to wait.