Hosts didn't have ghost of chance 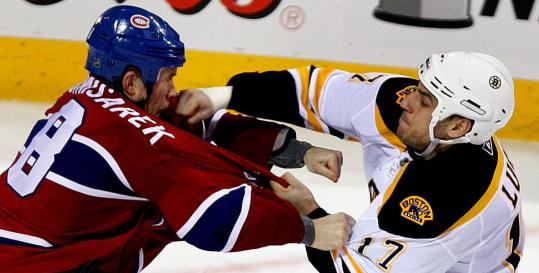 MONTREAL - Time will tell if the Bruins have begun a new era, one with significant success and perhaps a Stanley Cup, but they left here last night finally able to put some closure to their long and festering wound of playoff disappointment.

Here in a city once full of ghosts with such haunting surnames as Richard and Beliveau and Lafleur, the Bruins polished off a ghastly Canadiens team, 4-1, and ended their first-round playoff series with a four-game sweep of the faded franchise once known as Les Glorieux.

"It's nice, oh . . . yes, it's nice," said senior statesman/winger P.J. Axelsson, the only player who was on the roster in the spring of 1999 when the Bruins won their last postseason series, against Carolina. "I've always been hoping . . . and it's a little sweeter this time, I think. Maybe I was too young back then to know better."

For 10 years, the longest drought in the history of the Spoked-B franchise, the Bruins went 0-for-the-playoffs. They followed the win over Carolina with a second-round loss to Bufflalo, then qualified only four other times, going 9-16 over the course of four series and eight seasons.

Meanwhile, the franchise's season-ticket base, once as solid as Quincy granite, eroded to levels not seen since the early '60s, at one point dipping to approximately 5,000. The Bruins became a passionless play, easy targets for talk-show hosts and other bullies of the electronic and print media.

But it ended with the Habs, quickly and efficiently, lacking only in the suspense and drama the postseason usually holds when these two storied Original Six franchises go toe to toe. In truth, the Bruins won it with startling ease, trailing only twice in the series, and only briefly, over four games. When it came time to finish off their longtime nemesis, they collected four goals over a span of 15:16 across the first two periods, led by ex-Hab Michael Ryder (2-1 -3) and David Krejci (1-1 -2), and ultimately with Phil Kessel, benched for his indifferent play in Round 1 vs. the Habs last year, potting the 3-1 jawbreaker as he broke in alone on Carey Price out of the penalty box.

Just like that, 1-2-3-4, the frustrations and dark clouds of a decade were swept away from the distant sons of Bobby Orr and Phil Esposito.

"You know," said Tim Thomas, who fought off the Habs, as well as four days of flu-like symptoms, and finished with 26 saves to run his postseason mark to 4-0, "I never bought into the clouds."

Other than Axelsson, there really are precious few ties to the last 10 years. Vice president of Passion Cam Neely is still around as a top aide to general manager Peter Chiarelli, but the Hall of Fame right winger had retired by '99. Give 'em Hell Harry Sinden remains on the payroll, and he holds the title of Senior Advisor to the Owner, but there is a Cone of Silence over his office on Causeway Street. He doesn't give much of anything anymore.

By and large, about all this Boston team knows of the last decade's troubles consists of last year's loss to the Canadiens in seven games, and now the excitement of advancing to Round 2 (opponent unknown).

"When I got there, [the Garden] wasn't even half full some nights," mused coach Claude Julien, who was able to keep his squad marvelously disciplined and on task in the series - no small feat given the time of season and the decades of history between the clubs. "There wasn't too much emotion in the building. But it got better and better, [in part] thanks to the perfect matchup last year [with the Canadiens]. The fans have come back on board . . . and for their patience and the hard work our guys have given, it's a great match."

The Habs, meanwhile, are at the cusp of a massive franchise change. The team is for sale. GM Bob Gainey, who took over the bench down the stretch upon turfing coach Guy Carbonneau, could opt for retirement (or at least a job with less pressure and scrutiny, such as, oh, Canadian prime minister). They could lose up to half the roster to free agency, including stars Saku Koivu, Alex Kovalev, and valued defenseman Mike Komisarek (who'll be smartin' for months from the punch Milan Lucic delivered to his chin).

Hub fans know the feel and smell of a franchise in disarray. Right now, it looks as if the odor has moved some 300 miles north, where it might hang for a while on what once was the sport's crown jewel.

Meanwhile, the Bruins wait to learn who will be next on their dance card. Whoever comes along (perhaps the Rangers, who have a 3-1 lead over the Capitals), they'll be met with the same kind of focus and discipline the Bruins displayed in this series. Exhibit A: captain Zdeno Chara, who was on the ice just about every other minute and did not pick up so much as a minor penalty. Admirable, considering the banging the Habs tried to put on him, and the fact that Big Z was always out there at critical moments and against the best bleu-blanc-et-rouge talent.

"One of their biggest targets was Zdeno," noted Julien. "He was by far the most disciplined, because he was the most challenged. That was our No. 1 key . . . be disciplined and don't let our emotions get to us."

In a corner of the dressing room, the towering Chara sat quietly and with little animation. He is finishing his third season as captain, and this is the first taste of real success he has experienced since coming aboard for a deal worth $37.5 million over five years.

If a team takes on the attitude of its captain, then it will be a sense of calm that follows the Bruins the rest of this spring.

"I don't think we should be satisfied and happy," said Big Z. "This is just the first step in that road. We realize it only gets tougher from here. The farther you go, the harder it gets."

True enough, even for a town that for 10 years only wished it knew that kind of trouble.